Notice about the extra Rules 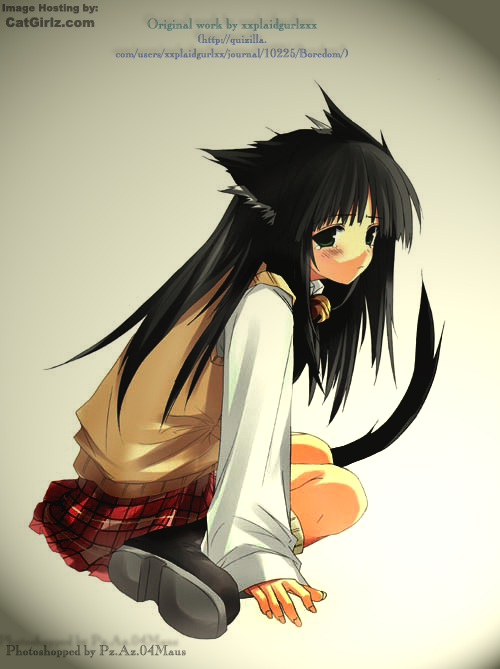 In thinking of how to make D&D Better, I started this Race in order to give both the people a good character choice to choose from as well as packing as many things that are different/new into this D&D Race as feasibly possible in order to see what works and what doesn't. The reasons for why I wanted to add these things is both, "Because I can," and, "Because I'm bored, and I wish to do something out of the box/give a good RP character race to people."

Please add possible things that you'd like for a D&D Race page to have, and please leave reviews on both the race and the new things I put in for it on the Discussion page. I'm trying to see how much things that have been overlooked by WoTC in a Race Description/Stats that I may put in.

Nekomimi are a race of humanoids that arise from a rare mutation that can affect any other humanoid race. They are born normally for their race, except they exhibit a combination of their parent's race and feline features. The mutation is not caused by any environmental triggers, and there is no way short of divination to see if a baby is a potential Nekomimi.

Although an aberration within the reproductive cycle of other races, Nekomimi themselves breed true. A child will not exhibit the features of both parents, instead strongly showing the traits of one, most often the parent that shares it's gender with the child. They are all of varying differences, but mostly have similarities to Homo Sapiens, though having a set of cat ears and/or a tail. While some differ in appearance, almost to the point of appearing to be an entirely different species, they are of the same race (Mostly). It is challenging to tell if a cat-creature is, in fact, a Nekomimi; some can be confused with Catkin, Catfolk, and Werecats of differing species, and even, albeit rarely and usually by someone extremely impaired mentally(Such of the case of being heavily drunk) or visually, moogles. Nekomimi are strictly a close-knit group of creatures so closely similar to one another, that they would have to be considered the same species to preserve Humanoid sanity.

Nekomimi seem to be of Gaian (Natural) or divine source, or perhaps are simply aberrant creatures of evolution. It is impossible to truly explain how these creatures could come to exist, but they do. Though some theories suggest that there may be some divine hand at play by one of the gods of nature.

Nekomimi are arguably one of the most complex and strange species in existence, most notably in terms of their personality... Depending on their moods (which can change instantly) Nekomimi can be spontaneous, open, joking, and laughing, and they can turn introspective, brooding, and cold seconds later. Nekomimi typically display cat-like behaviors, exhibiting traits such as playfulness, mischievousness and deviousness. Sometimes this may include cat gestures or sounds in written or verbal communications.

A Nekomimi is a humanoid with cat traits, such as cat ears, a cat tail, or other feline characteristics on an otherwise human body. The colouring of their catlike features can be any that are found of cats. Their human hair often matches this colour. Nekomimi can have the skin colour of their parents. Nekomimi often have unusual eyes that are slightly catlike or an unusual colour like purple or yellow.

More patient races tolerate the cat-people, while Humans seem intrigued with their abilities, and Werewolves seem to have a deep seated hatred for them. While most races regard them as vagrants, as they tend to wander from place to place, they are still treated well by communities. Being a Rarity some lands value them as Slaves and Oddities. (Think Circus Freaks)

Most are Chaotic Neutral, which supports the way they tend to switch from one emotional state to another at the drop of a hat, though this generalization doesn't prevent being any other alignment. Nekomimi are very rarely lawful and not normally evil, however a chaotic evil Nekomimi is a terrifying being.

For Most Nekomimi, it is simple for where they live; nowhere and everywhere. They do not have any real united lands, and most are just as adaptable to most environs as a standard Human. Even at places where the term "Humanoid-friendly" is a misnomer, it still stands. Nekomimi do not have any lands that they can call their own that is bigger than a city of at least 450 people, though they tend to be Nomadic moving from one place to another plying whatever trades they may have while actively searching for other Nekomimi. There also seem to be stationary Tribes of them who have Hunter-Gatherer Structures. (Think Native American Indians)

There are people who have heard rumor of a unified Nekomimi republic in countless areas, citing own eye-witnessing as well as vague encounters. However, it is simply too difficult to have a Nekomimi Nation because of the sheer difficulty of the other races to be granted a Nekomimi child...

Nekomimi often religiously irreverent or follow the religion of their parents. Most Nekomimi have a deep reverence for nature and sometimes choose to worship nature deities or spirits. More traditional Nekomimi have a great respect for their ancestors and often worship at shrines dedicated to them.

Nekosara (Spoken), is not written.

Many Nekos just use the name their parents give them. Depending on what race their parents are, this could be a human or elven name, or something else entirely.

Some Nekos go by nicknames like "Tabby" or "Fluff". These nicknames tend to be cat-related or involve some sort of obscure joke.