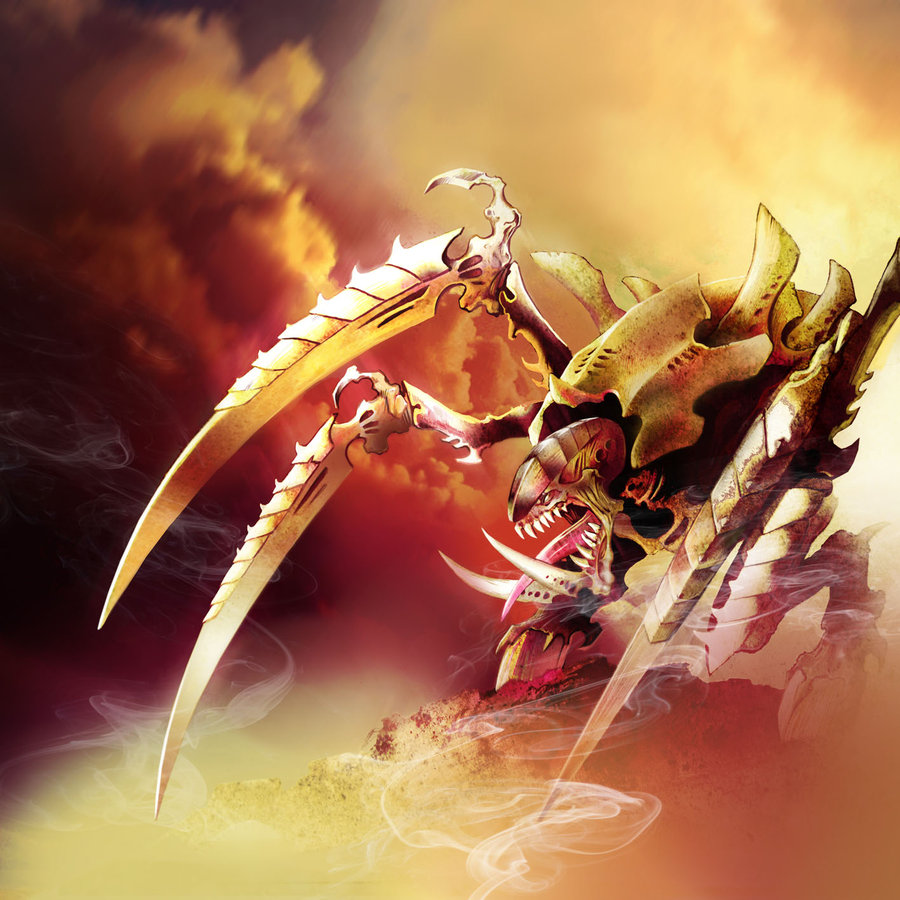 "You don't find a Carnifex. They find you. They weren't looking for you, but you're still on their hit list. Why? You're alive and in its way."

The Carnifex acts as a battering ram heavy unit for the Tyranid Hive Fleets. They storm the front lines and aim to destroy as much as they possibly can. As with all Tyranids, there are variants of this creature. Those listed here are the dominant types that are expected to be found.

A Carnifex’s natural weapons are treated as epic weapons for the purpose of overcoming damage reduction.

A Carnifex will lead the charge and will attack all enemies without discernment of which is a larger threat than another. They will fight until their deaths.

Augmented Critical: Bite attacks have an extended critical range of 19-20 with an x3 damage modification. Bite attacks deal x4 damage at a natural 20.

Flesh hooks: The underside of a Carnifex has 6 flesh-hooks; barbed appendages that impale a target to drag it closer.

These have a range of 40 feet. Carnifex cannot fire any independently. All must be used in tandem with the others.

Another character can attack a flesh hook that is taut and declare an attack of opportunity. Ranged weapons require a critical attack to sever a flesh hook.

Reeling speed is 10 feet per flesh hook per round. A hook that missed is retracted at 30 feet per round.

This is an attack action.

While flesh hooks are extended, the Carnifex is flat-footed.

Spine charge: A Thornback has large, hooked spines on its back or head that resemble horns. As a full action, a Thornback crouches low and sprints forward, cutting down swathes of its foes.

The Carnifex travels 50 feet in a fixed, straight path. If contact with an object causes it to stop, the creature is dazed for 2d4 rounds.

Aware creatures in the path can make a Reflex save to dodge out of the way (DC 25 – squares from attacker).

Screech: A Screamer-Killer can emits a piercing sonic attack right before firing its mouth Bio-Plasma weapon.

Opponents within 60 feet who witness the action take a -3 penalty to attack rolls for 5d6 rounds and cannot receive verbal communications for 2d4 rounds.

An affected opponent can resist the effects with a successful Will save (DC 31).

An opponent that succeeds on the saving throw is not immune to screeches.

Bile: A Bile Beast spews acidic fluids onto its foes before attacking in close combat using its huge crab-like claws.

The creature cannot bite for 1d3 rounds after using this attack.

Boulder rush: A Rock-Crusher has large formations on its back that extend well past its head. As a full action, a Rock-Crusher crouches low and sprints forward, breaking through enemy lines and cities.

The Carnifex travels 40 feet in a fixed, straight path. No object can stop this action.

Aware creatures in the path can make a Reflex save to dodge out of the way (DC 20 – squares from attacker).

Carapace (Ex): The Carnifex’s armorlike carapace is exceptionally tough and highly reflective, deflecting all rays, lines, cones, and even magic missile spells. There is a 15% chance of reflecting any such effect back at the caster; otherwise, it is merely negated. Check for reflection before rolling to overcome the creature’s spell resistance.

Frightful presence (Ex): A Carnifex’s very presence unsettling to foes. A Carnifex will usually declare its presence with a roar to sound a charge before an encounter. Opponents within 60 feet who witness the action become frightened for 5d6 rounds. This ability affects only opponents with fewer Hit Dice or levels than the creature has. An affected opponent can resist the effects with a successful Will save (DC 31). An opponent that succeeds on the saving throw is immune to that same creature’s frightful presence for 24 hours.

Terrain Mastery (Ex): Tyranids have an evolved covering every type of earth imaginable. As such, they are not penalized by difficult terrain.

Synapse web (Su): All Tyranids are connected to a psychic network controlled by the Hive Mind and extended/ monitored via Warriors. Tyranids within 400 + (100 x # of Warriors within range) feet of each other are mentally linked and controlled. Each is either aware of all conditions of each Tyranid or is being controlled by one that is. If a Tyranid is removed from the web by any means, they maintain a primal animal mentality. Smaller creatures will swarm their foes, soldier-types will regroup and fight as a unit, and Carnifexes will simply destroy all it can with abandon.