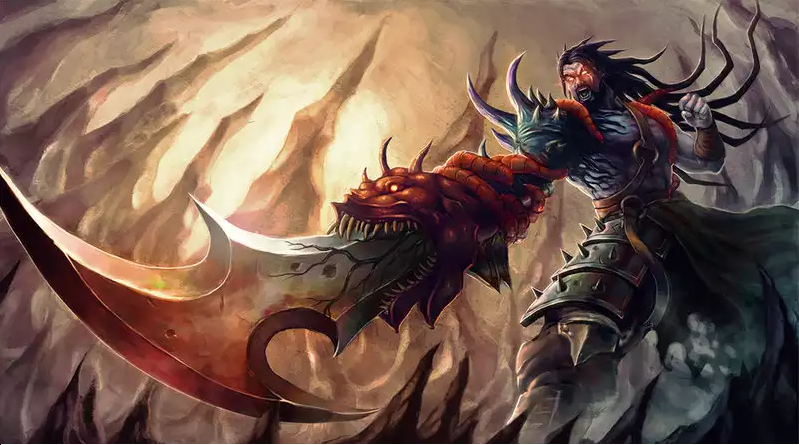 A demonic Butcher of Souls

A Butcher of Souls is a barbarian who has transcended mortal rage to become a force of eternal destruction. By using a piece of his own soul, he creates a blade capable of cleaving through not only mortal flesh but the immortal soul as well. Honing this blade, he becomes a avatar not of death but of pure destruction and rage.

Becoming a Butcher of Souls[edit]

Only the most rage-filled of barbarians have the ability to become a Butcher of Souls. The process of tearing a piece of one's soul out and forging it into a weapon not only requires an absurd amount of rage and obviously damages one's soul, but is also debilitating to the body and mind. To overcome this, an aspiring Butcher of Souls must learn the ritual of separation from an existing Butcher of Souls and prepare extensively. Then, once near death but defying it through rage, he must activate the runes of separation, while several others maintain his body and mind. When he awakens, his weapon will become crystalline and filled with it's own rage, and he will be a Butcher of Souls.

Ritual of Separation (Ex): An aspiring Butcher of Souls must go through many trials to transcend mortal rage. First, he must find an existing Butcher of Souls to provide him with the ritual instructions and a blessing. Next, he must have this existing Butcher carve a number of runes into his flesh, including one to mend the mind, one to heal bodily wounds, one to sever the soul, and one to bring it back. He must then find casters or magic items to cast Revivify, Heal and Restoration upon these runes, where they will be stored, costing him at least 5000 gp. Finally, he must activate the final rune which severs part of his soul. In order to activate this rune, he must reach -5 or lower hit points while raging, then activate all four runes (a single standard action). He will fall unconscious, and in fact momentarily die, but his soul will be brought back by Revivify and the physical and mental damage will be repaired by Heal and Restoration. In the following round, he will awaken, permanently changed.

A Butcher of Souls who has undergone the Ritual has eternally glowing eyes, the color dependent on the Butcher's soul. Most glow dark red, but gold, silver, black and white are all common colors. Other colors exist, but are rare. Additionally, the runes used in the Ritual remain, faintly glowing with the same color as his eyes. When raging, the Butcher's eyes light aflame and his runes glow as a torch, growing brighter as the Butcher approaches death.

Blade of Rage (Ex): The Butcher of Souls' signature weapon is his blade made of crystallized soul, formed during the Ritual of Separation. The weapon he was wielding during the Ritual loses all prior abilities and then gains a number of powers when transformed. His bonded weapon gains bonus enhancement, as shown in the class table, which can be used for normal enhancement bonuses or converted into special weapon abilities. The way this bonus is allocated can change once every 24 hours, if the Butcher so chooses.

Additionally, while in a rage, the weapon gains a few unique abilities. First, it glows with intensity ranging from a barely noticeable to bright sunlight, by the Butcher's choosing. Second, it drains the blood and life energy of its victims, returning hit points equal to 1/10th damage dealt, multiplied by the weapon's enhancement bonus. Finally, it becomes indestructible and can be called at any distance by the Butcher, and if broken prior to entering a rage, automatically reforms in the Butcher's hands.

Undying Rage (Ex): As a result of his encounter and denial of death, once a Butcher of Souls recovers from the Ritual of Separation at 3rd level, he gains the ability to defy his mortality. When in a rage, a Butcher of Souls remains conscious and does not lose hitpoints from acting when his hit points drop to negatives. Additionally, when in negative hitpoints, he gains +4 Strength.

Rune of Defiance (Su): At fifth level, a Butcher of Souls gains the ability to reuse some of the runes carved in his flesh, allowing him to further defy death. By making a poultice of crushed diamond dust worth 1000 gp or more, he may charge the rune that casted Revivify, which automatically triggers upon death (CL equal to hit dice). However, using the rune is extremely draining, leaving the Butcher Exhausted, and imposing a -2 penalty to strength and constitution for a week. Until the penalty is lifted, the rune cannot be recharged.

Eternal Rage (Ex): After gaining a certain level of power, a Butcher of Souls gains a sort of immortality within his rage. Starting at 7th level, a Butcher of Souls remains in rage for as long as he has negative hit points. However, while at negative hit points, the Butcher becomes mindless, its only urge to slaughter all nearby living things. A Butcher can still be killed while raging, but only after reducing them past a threshold equal to twice their maximum hit points. Once it passes that threshold, unless healed above the threshold, the Butcher will continue to rage for one minute as the rage slowly consumes their body. At the end of the minute, they immolate in a explosion of raw energy, dealing 1d10 damage per hit die (Reflex half) to all within 30 feet.

Rune of Recovery (Su): At ninth level, a Butcher of Souls unlocks a second rune, as a sort of safety against becoming soulless. If he puts the diamond poultice described in Rune of Defiance in the rune that casted Heal, he charges that rune instead. As he crosses the threshold noted above, the rune will trigger, usually bringing the Butcher somewhat safely above the threshold. This is just as exhausting as using the Rune of Defiance, and imposes the same penalties.

Soul Cleaver (Ex): Once a Butcher of Souls reaches the peak of their power, they reach their final goal - the destruction of souls. Whenever a 10th level Butcher of Souls kills a creature with a soul while raging, the soul is destroyed rather than sent to its designated afterlife.

A Butcher of Souls who stops being chaotic loses the favor of the patron deities of destruction that assist him. While he maintains most of his abilities, if he loses rage, many of these abilities become worthless. Additionally, his soul blade has it's bonus halved (to a minimum of 1).

Playing a Butcher of Souls[edit]

Combat: A Butcher of Souls fills much the same role as a regular barbarian in combat, though positions where they are prone to taking the brunt of the damage are even better filled.

Advancement: A Butcher of Souls will often return to their original class once they have mastered the art of defying death. However, Runescarred Berzerkers, especially those of 7th level or higher, will find this class a boon, since they are capable of casting two of the three spells needed to finish the Ritual of Separation.

Resources: Butchers of Souls have no organization, but stick together.

Butchers of Souls in the World[edit]

Butchers of Souls can be champions of the heavens, bringers of despair, and free-roaming mercenaries. Their only unified goal is to bring destruction.

NPC Reactions: Most NPCs either don't know of Butchers of Souls, or are terrified of them. Since the only way to bring back a destroyed soul is with a Wish or Miracle, many have a deep hatred and fear of the nearly irreversible powers of a Butcher of Souls.

Characters with ranks in Knowledge (The Planes) or Knowledge (Religion) can research Butchers of Souls to learn more about them. When a character makes a skill check, read or paraphrase the following, including information from lower DCs.

Butchers of Souls in the Game[edit]

Adaptation: Butchers of Souls have a variety of places in game. A player may want to take the class so that by the time they fight their archnemesis, they can put them down for good. As an encounter, a powerful (10th level) Butcher of Souls is a huge danger to everyone it can reach.

Sample Encounter: The party has been worn down after an adventure, and spot a city on the horizon. Upon getting closer, it looks very run down, but hospitable enough... and unwittingly, they enter The Bleeding City, ruled by Zilinos, Butcher of Souls.

See The Bleeding City for details.

Zilinos rules over The Bleeding City, a once prosperous urban settlement, now reduced to ruin by his wrath. Zilinos allows the city's people to live their lives relatively undisturbed, making the entire city a somewhat active town carved into the ruins of the old city. However, he has an army of loyal disciples who gather people in the city to fight in the Arena, a grotesque pit carved out of the ruin of the old city hall. Within, Zilinos runs a sort of colosseum for his own amusement, then slaughters the champions when they are deemed strong enough souls for his blade to devour.

An adventuring party who comes across the city may find themselves drafted into the Arena. If they fight those who try to take them in, more will show, though if the entire group of enemies is killed (generally twenty or so, a wave of five followed by a wave of fifteen, each a Butcher of Souls or Fury Mage of 7th to 9th level, Zilinos will have little or no warning if the party chooses to attack. Additionally, the city's people will treat them as heroes, and can give them of most of the information here (DM's discretion for the exact amount).

If they escape being drafted, slaughter every disciple, or simply scout the city quickly enough to buy supplies before the drafting occurs, people who enter The Bleeding City will find the town somewhat hospitable. There are standard mundane accommodations, as well as magic items in black markets (requiring a Gather Information check of 15 or greater). Some high-quality equipment can be acquired, though this is even harder to find (requiring a Gather Information check of 25 or greater), and there is markup varying from 20 to 100 percent compared to market price. However, disciples guard the gates, and so if the party finds they attempts to leave, they will find they are trapped.

The gatehouses, as well as the Arena and a few mostly-intact buildings nearby which house those favored by Zilinos, hold a number of security measures to keep the city's population in. Each has three mundane as well as a magical beacons to alert Zilinos of any concerns, and he has a small group of casters which can provide him with the speed to reach any gate in essentially no time (Persisted Footsteps of the Divine). Those who are caught are either executed on the spot, tortured, or brought to the Arena.

Within the Arena, the party's power will be loosely evaluated, their equipment confiscated, and their hands chained. Each day, they will fight to the death against one of the strongest of the gladiators within - mostly martial enemies of 10th level or so. If they win at least three matches, they will fight Zilinos. When not fighting, they will be kept in iron cells and guarded by ten disciples night and day, each readied to blast any escapees into oblivion.

If the party manages to defeat Zilinos, the disciples will flee, and the city will celebrate. Most of the gladiators will be freed and grateful, or will chase down the disciples. Additionally, twenty thousand gold pieces worth of diamonds and diamond dust can be found under Zilinos' throne, of which the party will be immediately informed. Zilinos also has a collection of magical weapons and armor worth approximately forty thousand gold pieces.

Zilinos, Butcher of the Bleeding City