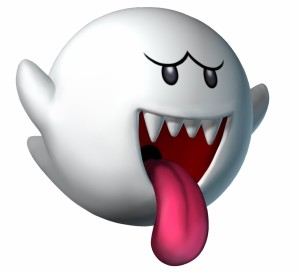 Suddenly a white ghost appears in front of you. you are so shocked and afraid you don't move, while the ghost gets closer

Boos are spirits who aren't the remains of dead beings. Boos are their own species who spring up in dark, abandoned places and spooky areas. Those loyal to Bowser are ruled by the insidious King Boo from the evil Boo's Wood and those who are "allied" with the Mushroom Kingdom are ruled by Lady Bow of the Boo's Mansion in Forever Forest's depths.

Boos tend to frighten their prey with their despair ability and then close down on the shocked opponent to bite them. Boos don't eat their enemies but instead knock them out in order to imprison them or throw them out of their home.

Despair (Su): At the mere sight of a boo, the viewer must suceed a DC 16 Will save or be paralyzed by surprise and fear for 1d4 rounds. Whether or not the save is successful, that creature cannot be affected by the same boo's despair ability for 24 hours. The save DC is Charisma-based.

Unnatural Aura (Su): Animals, whether wild or domesticated, can sense the unnatural presence of a spectre at a distance of 30 feet. They do not willingly approach nearer than that and panic if forced to do so; they remain panicked as long as they are within that range. Any mortal oopponents within 10 feet of a boo must make a will save (DC 18) or be panicked. All evil creatures fighting alongside the boos get a +6 to any will saves.