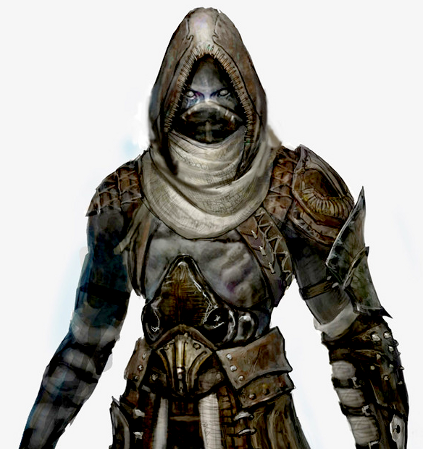 A Blinker in Light Leather Armor.

Blinkers use speed, agility and inert ability to move and transport themselves elsewhere by accelerating their speed to a high point.. They gain combat bonuses with their "blink" ability which comes in handy when facing multiple opponents. They train their reflexes and self control to move away from dangerous traps and stronger foes. Usually a person can only become a Blinker if someone in their family has the ability as it is believed to be genetic. It's exact origin is unknown.

Blinkers are strong with tasks such as theft, assassination, dexterous fighting and sleight of hand tricks but weak when it comes to fighting tank like targets as they can take a lot of damage which reduces a Blinker's speed and surprise advantage. They also often scorn magic since they accomplish their great speed without it. It is very rare for a blinker to be wielding a shield and are instead experts at fighting with two-weapons which makes them naturally ambidexterous. Blinkers automatically gain two-weapon fighting feats if they so choose and progress in two-weapon fighting accordingly (meet base requirements). *This training does not include two-weapon defense/rend etc.*

Races: Elves generally make the best Blinkers. The genetic traits and family structure of elves allows the ability to be passed extremely effectively. The long lifespan provides plentiful time for training and their body size is perfect for harnessing the ability. Their close-knit families also mean it is rare that they are not given at least some training from their eldars and families almost never loss knowledge of their ability.

Human Blinkers are probably the second largest group. While humans shorter lifespans tend to mean they are not as trained in it their blood seems to carry a more potent version of the Blinker Gene. There are also many more humans with the genetics required but no knowledge of or training on their ability.

Orcs and Dwarves are almost never Blinkers. Their blood rarely caries the gene and even if they do their bodies are not suited for the ability.

Alignment: Usually Chaotic. Blinkers rarely respect the law as they are very good at escaping it. They can be Good, Evil or Neutral.

Starting Gold: Varies based on previous work. As DM for guidance.

Starting Age: "Simple" or "As rogue"

Blinkers abilities are not magical but genetic abilities that are unlocked through proper training. As such they can be used in anti-magic and anti-psionic fields. All of the following are class features of the Blinkers.

Weapon and Armor Proficiency: A Blinker is proficient in light weapons and in light armor.

Offensive Blink (Ex): As a move action, a Level 1 Blinker may move 20' Instantly. The 20' is increased 5' every 2 Levels. Blink may only be used once per round. Offensive Blink does not provoke any attack of opportunity.

Blink Image (Ex): At Level 4, twice each hour, a Blinker may blink and re-appear faster than light, effectively making the eye of the enemy think he did not move (As the residual image of the Blinker does not disappear right away). The image will disappear after two rounds or after being hit once. Every five levels, a Blinker may add one more image. You may use this ability five times a day and every 4 Levels, he may use it once more every hour.

Defensive Blink (Ex): At 8th level, the Blinker may evade a blow with the help of a short blink, on the successfull Reflex save DC 20. The use of Blink(Defence) is a swift action, and may be used three times a day.

Blink Charge (Ex): At 10th level, the Blinker uses his Blink speed to increase it's own speed before impact. After starting it's charge and making the required amount of move to charge, the Blinker may Blink to it's normal Blink distance, and on impact, may add 2d8 damage to it's charge, as his Blink accelerated his charge and upgraded it's impact power. Blink charge may be used once per hour.

Chain Blink (Ex): At 12th Level, a Blinker may use this ability to blink towards an enemy, hit him, blink again, and hit another one, up to 4 times to it's Base Attack bonuses. He can only do this skill once an hour, 3 times a day.

Blink Feint/Counter (Ex): At 17th level, the Blinker may attack an enemy head on, and just when the target goes to defend himself and block the attack, the Blinker blinks behind him and attacks, removing the target's DEX AC modifier. This is the Feint version. The Counter version is used as a counter-attack, doing the same as the Feint version on a successfull DC 25 reflex save. The Blinker may use Blink Feint any time during his round. Blink Counter can be used once an hour. Blink Feint can be used on the Blinker's wish.

Blink Clone (Ex): At 20th level, the blinker has mastered use of Blink. Blinkers that can use this skill have mastered skill, reflexes and speed to blink in less than a tenth of a second, and re-blinking again, at the same speed, effectively making two or three "clones" of the Blinker which acts on the Blinker's will, as they are effectively...him. The difficulty to use three clones is DC 35 Reflex save. Blink Clones at level 20 will give their damage to the user and will Last (1+Int Modifier) rounds. Once the Blink Clones dissipate, the Blinker is reverted to normal speed and may not re-activate this skill for 24 hours/After sleeping for a full night as his muscles are effectively stiff, and will hurt the Blinker.

Epic Offensive Blink: The Blinker may now Blink 2 times per round and may move up to 100 ft per Blink.

Epic Chain Blink: The Blinker may now hit up to 6 targets with a Chain Blink and can use one of the Blinks to open a door, hit a lever, etc.

Epic Defensive Blink: The Blinker may now evade an attack with a Reflex save of 15. They can also intentionally hit traps and move out of the way before the effects hit.

Bonus Feat: Select another Feat and add it to your character. Any Feat works with DM approval but Feats to improve attack, speed and Dex Skills are recommended.

Religion: Blinkers generally do not have a strong belief in a deity and usually just follow a racial deity. Those who do have a deity associated with their class generally pick ones that show preference for speed and dexterity over strength or charm.

Other Classes: Blinkers get along well with most classes but can have difficulty dealing with melee fighters and barbarians as they are often judged as cowardly by them for not standing still in a fight..

Combat: In combat Blinkers use their abilities to get into the perfect places to attack a stronger or larger target and stay out of the way of attacks. They also generally start combat by demonstrating their abilities by killing unsuspecting targets with shots to the head, neck and heart.

Advancement: Typically this class should advance to be skilled with Hide, Move Silently, Open Lock and similar skills. This allows for the character to be a highly effective assassin and wait for the right moment to attack.

Daily Life: Those with the genetics needed to Blink do not always discover their ability, training is passed down in the family and there are families who dont know they have the power in their blood. Those who's family does know of their ability often spend a very long time training that power to actually be useful to them. For most it takes decades to even develop basic Blinking abilities and it is extremely stressful. Once the ability is developed as much as it can be through teaching they go out and they can either use their powers to work or take normal jobs and just pass on the power to their children and use it when the must. Those who chose to use it for a living often become assassins, thieves and con men.

Notables: Blinkers are not a group with a lot of notable members. Blinkers tend to keep their abilities secret until they need to use them and frequently kill all those who see them use the power. The ability is also often mistaken for teleportation and it's users as Mages. Those who are considered notable are people who put on their abilities as a display as Arena Fighters or Wandering Adventurers who show of their abilities to kill groups of opponents or intimidate others.

Organizations: Blinkers do not organize in large groups. The ability is rare and those who are are trained in it generally prefer to keep it secret. When they do organize the groups are quite small and most of the members are closely related to each other (Usually Siblings and Cousins.). They primarily work together in secret for the benefit of their family or some other group they support more openly in public life. Another reason they may team together is to train younger family members to use their genetic abilities.

NPC Reactions: Most Blinkers keep their abilities hidden at first and are rarely recognized. Those who do know are generally fearful because they know that a Blinker could kill them with almost no warning. People generally distrust them.

Characters with ranks in Knowledge (Arcana) can research Blinkers to learn more about them. When a character makes a skill check, read or paraphrase the following, including information from lower DCs. The ability of Blinkers is not a magical one but only people with Arcane knowledge generally recognize that as most think it is a teleportation ability.