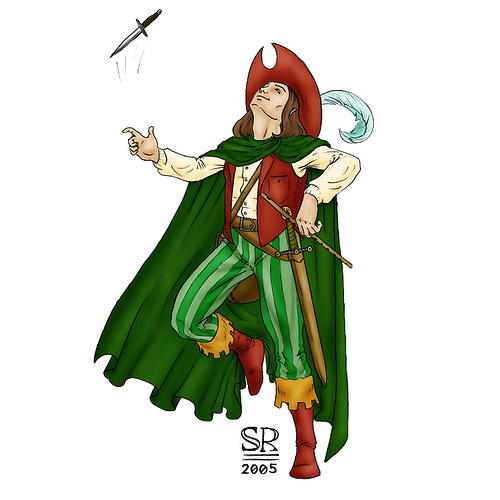 The Bladesong, the finest of the duel arts, the ability to fight surrounded by the melody of the swords. Few things are as graceful as a Bladesong warrior fighting, and even fewer are as deadly.

The Bladesong warrior is a bard who exchanged the arcane learning for a better combat capacity. He studies the Bladesong, the art of creating magical effects through music while fighting in melee. While he gets stronger, he aquires the bladedance, his ultimate technique. With it he can deliver multiple attacks while increasing his and his party's abilities, blocking magic or fascinating his enemies.

All the following are class features of the Bladesong Warrior:

To activate the Bladesong, the character must take a full-attack action and deliver a single melee attack, which will have the desired effect added. Unless otherwise noted, the target will still suffer the Bladesong effect even if the attack misses.

Song of despair (Sp): The warrior strike creates a terrifying sound, frightening the subject of the attack. The target must succeed in a Will save (DC 10 + Bladesong warrior level + Cha modifier) or become frightened for 1d6 rounds.

Rupture chord (Su): Unlike the other Bladesongs, the rupture chord only works upon a successful attack. The attack deals 2 points of constitution damage due to blood loss. Creatures immune to critical hits are immune to this effect.

Note of madness (Sp): This single note made by the Bladesong warrior can drive a creature insane. The target must succeed on a Will save (DC 10 + bladesong warrior level + Cha modifier) or become confused for 4 rounds.

Soundburst (Su): The most powerful Bladesong, the soundburst creates a huge sonic wave with immense power. All creatures in a 20ft-radius circle around the warrior take 12d6 + the character ranks in Perform(Bladesong sword) sonic damage and become deafened for 2d4 rounds. A reflex save (DC 10 + bladesong warrior level + Cha modifier) halves the damage and prevents the deafness. Activating the soundburst costs two daily uses of bardic music.

Musical defense (Su): Starting at the 2nd level, whenever a Bladesong warrior uses his bardic music, Bladesong ability or bladedance, he creates a powerful shield of pure sound, which absorbs incoming attacks, granting him DR 1/magic and elemental resistance equal to his class level. This shield lasts until the warrior's next round for the Bladesong and the bladedance and for as long as he keeps playing his bardic music. This DR improves to 3/magic at the 6th level and to 5/magic at the 10th level.

Bladedance: The Bladesong warrior's fighting style is as beatiful as fluid as a dance. He can take a -2 penalty on all attacks in a full-attack action and make an extra attack with his best attack bonus. Starting at the 4th level, the Bladesong warrior can add special effects with his dance. Whenever he does a bladedance, he can increase the penalty to -6 and spend one daily use of his bardic music to add the effect of a bladedance. At the 8th level, this penalty decreases to -4.

Dance of courage (Su): All allies in a 20ft-radius circle centered on the Bladesong warrior who can see and hear him gets a +2 moral bonus on saving throws against fear and a +2 moral bonus on attack and weapon damage rolls for 5 rounds. This bonus increases to +4 at 8th level.

Anti-magic dance (Sp): The Bladesong warrior can use his dance to end ongoing magical effects around him. He dispels magic as the spell cast by a bard with a caster level equal to his class level. The effect is centered on the Bladesong warrior.

Blossom dance (Su): This is the ultimate ability of the Bladesong warrior. To use this ability, the warrior must make a Perform (Bladesong sword) check. All enemies within a 20ft-radius circle around the warrior who can see and hear him must succeed on a Will save (DC equal to his check result) or become fascinated. If a creature’s saving throw succeeds, the warrior cannot attempt to fascinate that creature again for 24 hours. All allies within the area who can see and hear him gains 2 bonus Hit Dice (d10s), a +3 competence bonus on attack rolls and a +2 competence bonus on all saves. The bonus Hit Dice count as regular Hit Dice for determining the effect of spells such as sleep.

The Bladesong Warrior is a bard who chooses to stop being just a support for the group. His abilities to inflict massive damage with the bladesongs and his improved basic attack and defense can make his withstand a melee fight.

Even though he is not as strong as a fighter, his magical capabilities make him a worthy addition to the battlefield.

Combat: Even though a Bladesong warrior is a better loner than the bard, he rarely adventures without a party, after all, he's still a storyteller and exploring dungeons with his party adds a lot of content to the tales he tells. Due to his skills at helping others, a party would also love to have him with them. A Bladesong warrior usualy plays both a support and a striker role within the party. Using the bladedance, he can improve the abilities of his team-mates, and with the Bladesongs he can both damage and disable the enemies.