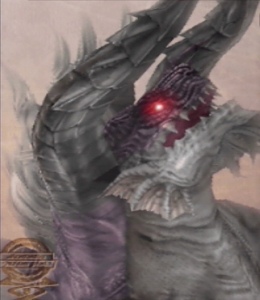 A truly colossal reptile lumbers out from the enormous redwoods. The beast's scales are a metallic violet, and a large fin runs down its back. Its silver-haired head is framed by a pair of segmented horns, and its maw is filled with countless rows of teeth. Its long, fishlike tail easily decimates the towering trees as it rears up on its hind legs and bellows at you.

The Behemoth King is arguably the most powerful of the non-true dragons in existence, possessing levels of force equal to that of a prismatic dragon. It is revered by some as a Guardian of the forest, savagely attacking all those who disturb the balance and sanctity of the wood. The Behemoth King will aid druids of any alignment, should they travel within its domain.

The Behemoth King is 80 feet long from its horns to the end of its tail, and is 20 feet tall. It weighs 35 tonnes. It typically walks on all four legs, although it will rear up from time to time for the purpose of inspiring terror.

The Behemoth King can speak Common, Draconic and Druidic.

In combat the Behemoth King will discern which party members are focused on physical attacks and spellcasting, and respond with the opposing force (ie, will pummel wizards with physical attacks, or rain spells down upon a fighter). Should it note that this strategem doesn't prove fruitful, it will swich tactics, alternating between physical and magical attacks on one or several targets at a time.

Greater Barrier (Su): Once the Behemoth King has been reduced to 2000 hp or less, it automatically creates a powerful energy shield with which it surrounds itself. The field results in the following:

Dispel Magic has no effect on this ability, and an antimagic field will only surpress it for 1 round, after which the antimagic field itself collapses unless the caster makes a DC 100 will save.