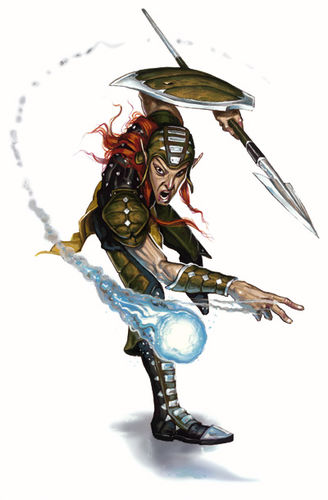 A spear-wielding battle mage in all their glory!

Battle mages are arcane spellcasters—most notable abjurers and evokers—who live for the din of combat, screams of pain, and, especially, the epic destruction wrought by war. The more utilitarian spells of wizards, sorcerers, and bards have little importance to a battle mage; they favor function over form and are drilled only in spells most useful for smiting foes, sowing confusion, and screening allies. A battle mage cares only for success in battle, often as part of an army, or in the smaller series of campaigns favored by adventuring companies

The vast majority of battle mages are graduates of special arcane war colleges. These academies are not for the faint of heart; they follow a grueling course of study more akin to boot camp than a wizardly apprenticeship. Throughout the training, they are taught to wear armor while casting spells that are regularly of a far-higher level than the battle mage can actually cast. The training drills the spells of war into their memory, thereby allowing them to prepare and cast spells of war without needing a spellbook or other implements.

Battle mages are mainly humans or half-elves, but the spiritual strength needed to survive, let alone graduate from, an arcane war college can manifest itself among in any individual. Savage humanoid battle mages aren't uncommon, and some of the more organized societies even set up their own colleges

For adventuring companies, a battle mage provides one thing: brute firepower. Battle mages hone their skills through action, not study, so without prolonged use of their powers they cannot become truly deadly. Good-aligned battle mages are concerned with fighting warlike and/or evil groups, for who better to blast into oblivion than those who deserve blasting! Evil battle mages have little to no constraint on their actions, and adventure solely to gain power.

Because people of every alignment must be prepared to fight for their causes, battle mages of all alignments exist. Any army that uses spellcasters as artillery is a home for a good battle mage.

Weapon and Armor Proficiencies: You are proficient in all simple and martial weapons. You are also proficient with light armor and shields.

Spellcasting: At each level, you gain new spells per day and an increase in caster level (and spells known, if applicable) as if you had also gained a level in an arcane spellcasting class to which you belonged before adding the prestige class level. You do not, however, gain any other benefit a character of that class would have gained. If you had more than one arcane spellcasting class before becoming an ancient bladesinger, you must decide to which class to add each level for the purpose of determining spells per day, caster level, and spells known.

Spellbook: If your spellcasting class relies on a spellbook or similar mechanic, you gain two spells of a level you can cast from the schools of abjuration or evocation. You do not have to pay to scribe these spells into your spellbook, nor do you need to make a Spellcraft check to learn them. It is assumed you developed them during your downtime.

Battle Magic: You have learned how to offset the hindrance armor causes to most mages. Lower the Arcane Spell Failure of any armor you wear or shield you carry by 5% per class level. In addition, if you prepare spells, you may spontaneously convert any prepared arcane spell into any arcane spell you know from the schools of abjuration or evocation, just as a cleric can spontaneously convert their prepared spells into cure spells.

Channeled Metamagic You can apply the metamagic effect from any metamagic feat you know to an abjuration or evocation spell you cast without preparing it beforehand or increasing its casting time.

Elemental Infusion: Your Energy Substitution and Energy Admixture feats are no longer bound to a single energy type. Whenever you apply either of these feats to one of your abjuration or evocation spells, you may select what energy type(s) are being applied at that time.

Metaphysical Sacrifice: You gain the ability to apply metamagic effects from metamagic feats to your spells by taking ability damage instead of increasing the effective level of the spell. You choose which of your ability scores to damage each time you cast such a spell. All damage from a casting of a spell must go to the same ability.

Power Unleashed: The effective caster level of your abjuration and evocation spells are no longer bound by spell level. Thus if you were a 12th-level caster, your fireball spell would inflict 12d6 damage rather than being limited to 10d6. Similarly, your dispel magic spell would gain a +12 bonus on the dispel check rather than being limited to +10.

Metamagic Mastery: You reduce the spell level adjustment of any metamagic feat you use by 1 (to a minimum of +0). If used in conjunction with Metaphysical Sacrifice, this spell level reduction is increased to 2.

Pervasive Magic: You gain a competence bonus equal to your class level on caster level checks to penetrate spell resistance with your abjuration and evocation spells. This bonus stacks with Spell Penetration and similar effects.