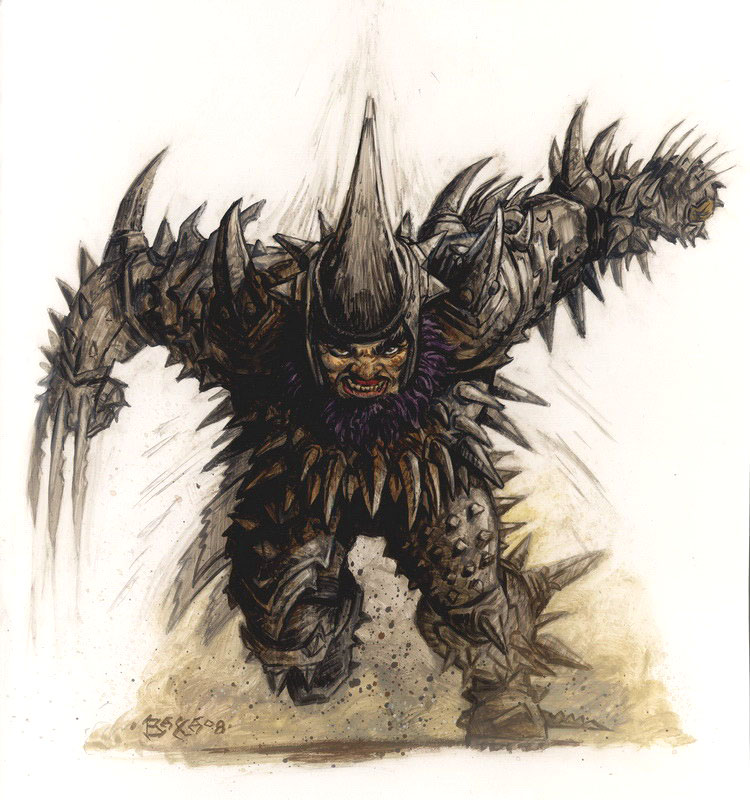 Image of Thibbledorf Pwent by Tom Baxa found in A Reader's Guide to R. A. Salvatore's the Legend of Drizzt

An aged gnome warrior's shiny spiked armor seems to glow under the rising sun. The warrior cuts down everything in its path, using the spiky armor to impale their foes. Their movements are unrivaled for someone in heavy armor. There very figure strikes fear into their enemies. They are a battle hedgehog.

A large troll swipes up a small gnome in menacing armor and stuffs it in its mouth. For a time, it seems that the gnome is dead. Suddenly, the gnome escapes through the troll's throat with their spikey armor. The troll falls to the ground and a gnome wearing the heavy armor of a battle hedgehog crawls out.

A Unique Style of Fighting[edit]

The battle hedgehog is a warrior that wears heavy armor and gauntlets covered in spikes. They have perfected the way to move completely unhindered by their armor, and use their skills to protect themselves and injure their foes. Due to tradition, most battle hedgehogs belong to Small races (ex. gnome or halfling) as the way of fighting has been passed down among select warriors from one generation to another.

Why have you decided to take up this unusual style of fighting? Who trained you to move unhindered by your armor? How did you smith your specially crafted armor? Did you grow as a smith's apprentice? Or, did you find this armor in a dusty attic with a training manual? What is your goal for becoming a battle hedgehog?

You can make a battle hedgehog quickly by following these suggestions. First, Dexterity should be your highest ability score, followed by Constitution. Second, choose the soldier background. Third, choose two daggers, the dungeoneer's pack, and the spiked chain mail.

As a Battle Hedgehog you gain the following class features.

Starting at the 1st level, your movement speed is not decreased when you don't meet the the Strength requirement on heavy armor if you have at least 13 Dexterity. In addition, you ignore the weight of heavy armor you are wearing when calculating your carrying capacity. 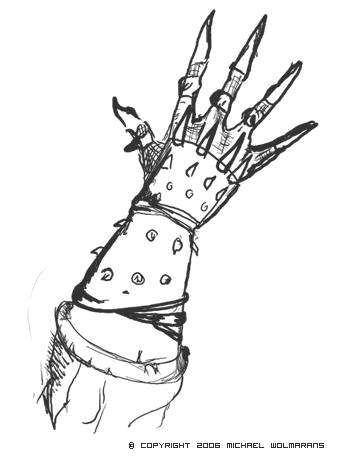 Starting at the 2nd level, you have begun to master the way to protect yourself using your spikes. While wearing heavy armor, you gain a +1 bonus to your AC. This bonus increases to +2 at 5th level, +3 at 11th level, and +4 at 17th level.

At the third level you can choose and preference detailing you style of fighting. These include the Porcupine Preference and the Hedgehog Preference. Your preference grants you features at 3rd level and again at 6th, 10th, 15th, and 20th level.

Starting at 6th level, your unarmed strikes count as magical for the purpose of overcoming resistance and immunity to nonmagical attacks and damage.

Starting at the 7th level, as a bonus action, you can roll up into a spikey ball, causing your AC to increase by +2 when you are in this form. While you are in your spikey ball you cannot use your reaction, take actions, or move. You can uncurl from your ball as a bonus action. When you have pokey defense activated, you can rebuke enemies that hit you causing creatures that hit you with unarmed strikes to take 2d6 piercing damage.

Starting at the 9th level, you have learned how to use feints in order to fool an enemy. As a bonus action, you may confuse a target creature you can see within 30 feet of you, making them think you are going to do something are not. The target creature must make a DC 8 + your proficiency bonus + your Dexterity modifier Wisdom saving throw. On a failure, you have advantage on your melee attack you make against them. On a success, the target is immune to Unusual Maneuvers for 24 hours.

Starting at 11th level, when a creature makes a melee attack against you and misses, as a reaction, you may make an unarmed strike against them if they are within your range.

Starting at the 13th level, you are starting to become more and more like a hedgehog and have gained an increased awareness of your surroundings. Your sense of smell and hearing increase and your perception is also heightened. You have advantage on Wisdom (Perception) checks that rely on hearing or smell. In addition, you gain proficiency with the Insight skill, and if you already have proficiency in it, your proficiency bonus is doubled for any Wisdom (Insight) check you make.

You are staring to become increasing harder to take down as your power grows. Starting at 17th level, whenever you are damaged, you can use your reaction to gain resistance to one of the damage types that damaged you until the start of your next turn. You may use this feature two times, and you regain all uses of this feature when you finish a short or long rest.

Starting at the 18th level, your spines are so sharp that your enemies are afraid of you and your spikes. Whenever a creature that can see you attacks you, as a reaction, you may cause the triggering attack to be made at disadvantage. If the target misses their attack, they have disadvantage on all their attack rolls against you until the start of their next turn.

Battle hedgehogs of the porcupine preference gravitate towards porcupines; they like their laid back fighting style and have begun to mimic it.They like to sit back and hit enemies by shooting deadly accurate spines at range. They are known to be expert marksmen that can deal with just about any situation. Often, enemies may rush a porcupine preference battle hedgehog, and get instantly showered in spines before even having a chance to take an attack.

Starting at the 3rd level, when you choose this preference you can shoot singular spines. In place of an unarmed strike using spiked gauntlets, you may shoot a spine at a target you can see. The spines have a range of 30/60 feet, use your Dexterity modifier for their attack and damage rolls, and deal 1d6 piercing damage.

Starting at 3rd level, when a target hits you with a melee attack, as a reaction you may poke the target with your spikes dealing 1d4 piercing damage to them. This damage increases when you reach certain battle hedgehog levels as shown in the Spike Rebuke Damage table. You may use this feature a number of times equal to your proficiency bonus, and you regain all uses of this feature after you finish a short or long rest.

Starting at the 6th level your porcupine-like nature begins to set in. You gain darkvision for 60 feet, and if you already have darkvision, the range is increased by an additional 30 feet. In addition, you do not have disadvantage on Wisdom (Perception) checks made using sight in lightly obscured areas.

Starting at the 10th level, you have mastered the art of ejecting spines. Your Spike Throw now has a range or 60/90 feet and deals 1d8 piercing damage. In addition, you may now use Spike Rebuke as a reaction to when any creature within 30 feet of you hits you with an attack, ejecting a spine out to hit the target that hit you.

Starting at the 15th level the range and power of your spines know no bounds. As an action, you may shoot a singular spine at a target you can see. The spine has a range of 120/180 feet, uses your Dexterity modifier for its attack and damage rolls, and deals 3d10 piercing damage.

Starting at the 20th level, you have learned how to fling spikes all around you, bombarding your enemies. As an action, all enemy creatures with 30 feet of you must make a Dexterity saving throw equal to DC 8 + proficiency modifier + your Dexterity modifier. On a failure, they take 12d10 piercing damage or half as much on a success. Once you use this feature, you can not use it again until you finish a short or long rest.

Starting at 3rd level when you choose this preference, you gain the ability to shield yourself from attacks. When you are hit by an attack, as a reaction, you may reduce the amount of damage you take by 1d4 + your battle hedgehog level. You may use this feature a number of times equal to your proficiency bonus, and you regain all uses of this feature after you finish a short or long rest.

Starting at 10th level, as an action, you can charge toward a chosen target with a range of 30 feet, moving towards them in a line. The charge's movement does not trigger opportunity attacks. This feature deals 1d10 + your battle hedgehog level piercing damage and knocks Large or smaller creatures prone if they were in the way towards your target or are the target. All creatures hit by this must make a Dexterity or Strength(their choice) saving throw equal to DC 8 + proficiency modifier + your Dexterity modifier. If they succeed, they take half damage and are not knocked prone. You may use this feature twice and regain all uses of this feature after you finish a short or long rest.

Starting at the 20th, you have learned to shift your spikes into a perfect guard, but you can only hold it for so long. When you curl up into your ball for the Pokey Defense feature you may choose to harden your defense to the extreme for a short period of time. Until the start of your next turn, you become immune to all damage. Once you use this feature, you can not use it again until you finish a short or long rest.

Prerequisites. To qualify for multiclassing into the battle hedgehog class, you must meet these prerequisites: 13 Dexterity and 13 Constitution and you must be proficient with heavy armor.

Proficiencies. When you multiclass into the battle hedgehog class, you gain the following proficiencies: simple weapons and martial weapons.