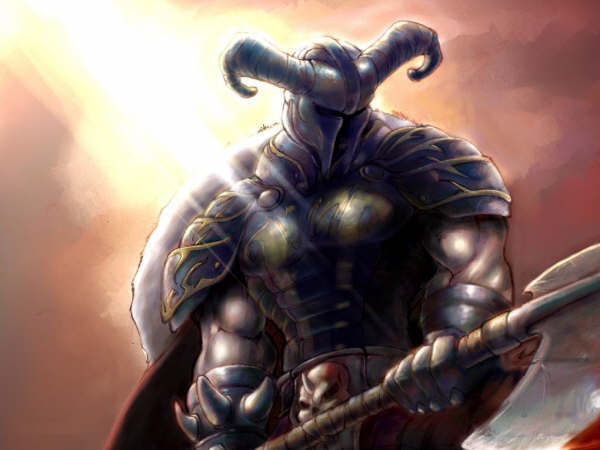 Anyone can be a barbarian; it requires a terrible effort to remain a civilized man.

"My name is Sharptooth of the Wolf Tribe. Your women, lands, and riches are mine."

Playing a Barbarian is actually very easy. In general, you hit things, and they fall down. A Barbarian's action in almost any circumstance can plausibly be "I hit it with my great axe!" As such, a Barbarian character can be a good method to introduce a new player to the game or kill some orcs when you've had a few glasses of brew.

As a Barbarian, you charge into a crowd of enemies and turn on Drowning Pool's Let the Bodies Hit the Floor. You will take many, many hits in doing so, but once the fight ends and you stop raging, your Fast Healing will allow you to go back to full HP relatively soon. Which is good, because nothing makes the party healer irritable like him having to burn all the charges in his wand AND his spells that day for your benefit. Therefore, the only time you may need healing is in the thick of battle, to keep you from actually dying (which is a distinct possibility for you). Nonetheless, if you aren't taking damage in an encounter, you aren't playing your Barbarian correctly.

Races: Anybody can become a barbarian, and in areas with little in the way of civilization, a lot of people do.

Alignment: Every alignment has its share of Barbarians, however more Barbarians are of Chaotic alignment than of Lawful Alignment.

All of the following are class features of the Barbarian.

Rage (Ex): When doing melee damage to a foe or being struck by a foe, a Barbarian may choose to enter a Rage as an immediate action. While Raging, a Barbarian gains a +2 morale bonus to hit and damage in melee combat and may apply any Rage Dice he has to his melee damage rolls. He also gains a +2 to saves, a -2 to AC, and he gains DR X/- with “X” being equal to half his Barbarian level +2 (rounded down). For example, a 1st level Barbarian has DR 2/- while Raging and a 10th level Barbarian has DR 7/- while Raging.

Fast Healing (Ex): Barbarians shrug off wounds that would cripple a lesser man, and have learned to draw upon deep reserves of energy and stamina. At 1st level, they gain Fast Healing 1. At 5th level this becomes Fast Healing 5, Fast Healing 10 at 10th level, Fast Healing 15 at 15th level, and Fast Healing 20 at 20th level. This healing only applies while he is not raging.

Combat Movement (Ex): While Raging, a Barbarian moves faster in combat, and may add his Combat Movement to his speed when he takes a move action to move.

Battle Hardened (Ex): At 3rd level, a Raging Barbarian’s mind has been closed off from distractions by the depths of his bloodlust and battle fury. While Raging, he may use his Fortitude Save in place of his Will Save. If he is under the effects of a compulsion or fear effect, he may act normally while Raging as if he was inside a protection from evil effect.

Sidestep Hazards (Ex): At 5th level, a Raging Barbarian learns to sidestep hazards with an intuitive and primal danger sense. While Raging, he may use his Fortitude Save in place of his Reflex Save.

Call the Horde (Ex): An 11th level Barbarian becomes a hero of his people. He gains the Command feat as a bonus feat, but his followers must be Barbarians. In campaigns that do not use Leadership feats, he instead gains a +2 unnamed bonus to all saves.

Watched by Totems (Ex): At 13th level, a Barbarian may immediately reroll any failed save. He may do this no more than once per failed save.

Primal Assault (Ex): At 15th level, a Raging Barbarian’s may choose to radiate an effect similar to an antimagic field when he enters a Rage, with a caster level equal to his HD. Unlike a normal antimagic field, this effect does not suppress magic effects on him or the effects of magic items he is wearing or holding.

Savagery (Ex): At 17th level, a Raging Barbarian may take a full round action to make a normal melee attack that has an additional effect similar to a mage's disjunction. Unlike a normal disjunction, this effect only targets a single item or creature struck.

One With The Beast (Ex): At 19th level, a Barbarian no longer needs to be in a Rage to use any Barbarian ability.