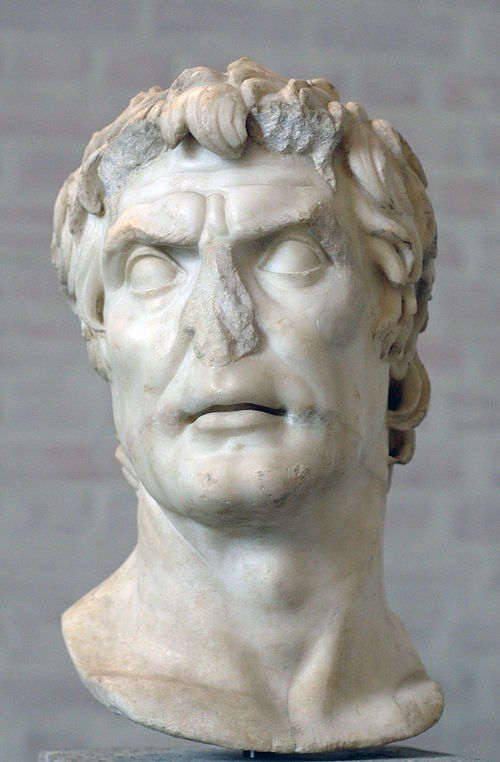 A bust of the Emperor Orodes. Evidence of his orcish heritage was defaced by the jealous last emperor of this Dynasty, Altoni the Cruel.

If the Nikosian Dynasty was known for its preference for goliaths, the Altonian Dynasty (1154-1287) was known for persecuting them. Emperor Mithrad removed goliaths from all positions of influence. All their privileges were revoked and they were relegated to second-class citizens. Many were enslaved and sold to other lands.

During this time, the Alabastrian Empire rose, conquered the lands of the other kingdoms founded by Lucinda. By 1230, it was clear, even to the debased Altonian Emperors, that their star was waning and the Alabastrian star was rising. More fearful of another uprising than Alabastrian invasion, the two Emperors concluded a treaty. Empress Phratia would marry an orc of the Alabastrians’ choice, and their child would be educated in Aligon for ten years before returning to the Second Empire to complete an education there. Phratia agreed, but concerned, managed to avoid childbirth for ten years.

When their son, Phratakes, returned from Aligon in 1250, he was unlike any orc before. He also brought as his advisor, the Deva General Muso, who promptly killed Phratia and attempted to install himself as regent for the young prince Phratakes. Phratia’s husband, Orodes, deposed his own son. Muso and Phratakes fled to the Barrens and Orodes crowned himself Emperor. However, his reign was so cruel and debaucherous that within three years, Phratakes and Muso led a rebellion to retake their crown. Phratakes did try to remake the Second Empire to be more Alabastrian. Within a few years, another rebellion led by a half-orc named Altoni I deposed them. Muso fled, but died in the wilderness and did not return. The Alabastrian Empire decided to leave the Second Empire alone.

Altoni the Cruel rules for a quarter-century. His rule was brutal and paranoid. When he died in 1287, he had no clear successor. His generals fight, with several installing themselves as Emperor for the next 13 years. Finally, a stranger – apparently human – named Vologasia organizes a popular revolt, quells the various factions and founds the new Vologasian Dynasty. The rule of the orcs had ended.