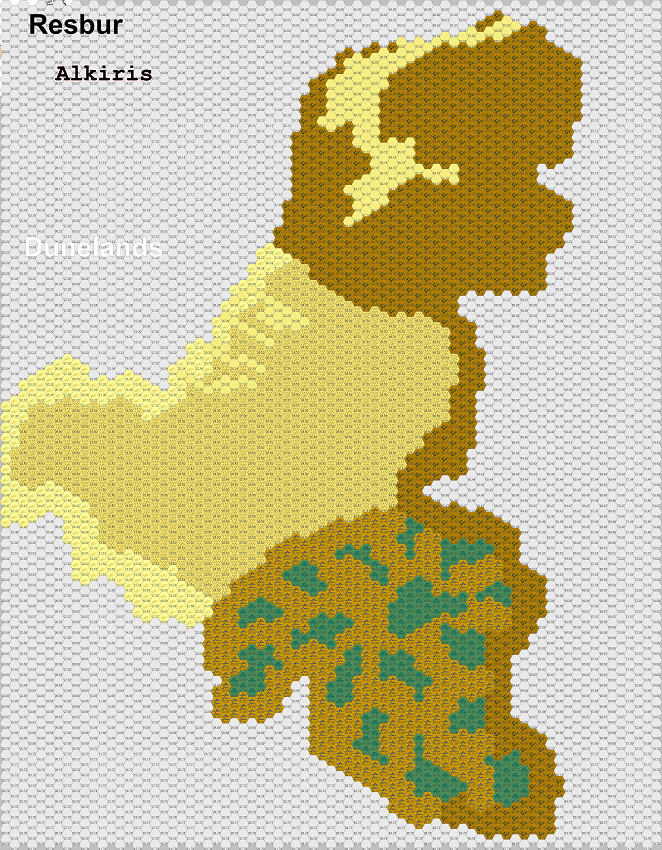 Alkiris is located on the sub-continent of Resbur, and is home to many nomadic tribes. There are many sand and rock related creatures and large trained Bulettes. There is almost no rain in Alkiris, the only place that receives any rainfall is the Southern Jungle. The summers are blistering hot, and the winters are hot.

The official government is ruled by a Military Governor. While he has created many laws, many of the population ignores them and continue's with their nomadic ways. The main actual governments are made of tribes that wander the lands, and the Minotaur cities that lie beneath the deserts. The common languages are Common and Draconic

The races of Alkiris worship the old gods, primarily Avandra, Bahamut, and Kord. There is a temple to Bahamut in the mountain region where the Military Governor is located. All of the citizens could care less about what people believe as long as they help the camps move.

The main raves are Dragonborn in the mountains, Minotaurs in the deserts and Goliath in the jungle. The different races often will pass each other on the roads, and don't care about the others as long as they don't cause harm to the caravans. If a tribe needs help, a wandering tribe will help them, but it might be a while before they are found.

Much like Westus, there are no official guilds that each class belongs to. Over the year tough, three major guilds have sprung up and any class can belong to them. The guilds are...

Fighter Guild The Fighter guild is created from soldiers and caravan guards. All Fighters gain +1 to all intimidate checks.* The members of the Fighter Guild are...

Scout Guild The Scout guild is created from trackers and hunters for the caravans. All Scouts gain +1 to all perception checks.* The members of the Scout Guild are...

If your character is from Alkiris, you can read and speak Draven, and gain a +2 to endurance and athletics.*