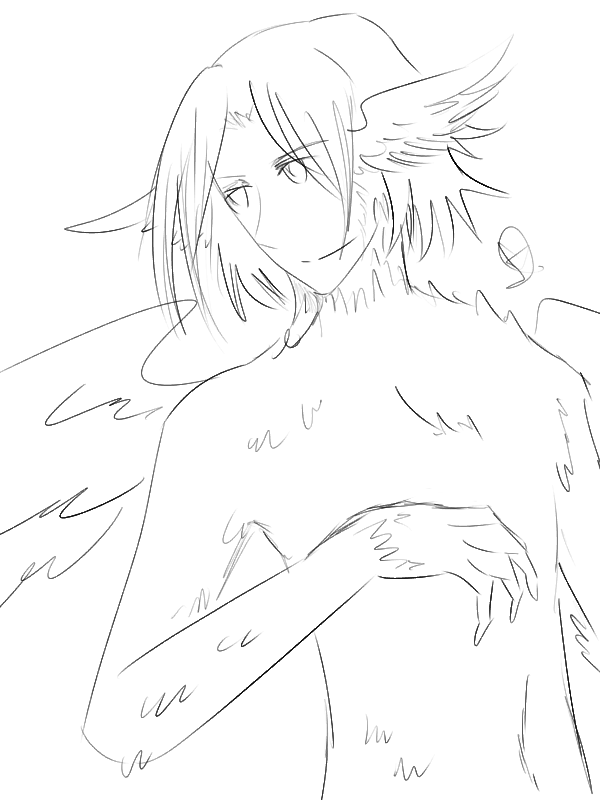 Aeris are humanoids sporting feathers like a harpy. However, they are better at gliding than flying with their small wings, which sprout from the sides of their head as well as from their back. Feathers cover their body up to their chins and forehead, leaving their hair exposed. The feathers also abate to show a rather human pair of hands and feet. Aeris are usually called attractive creatures due to their slim figures and baby-like youthful faces.

Aeris were formerly of a race where they were a creature similar to an elf. They were highly devoted to serving the spirits of nature and gave themselves to war for them. At the culmination of one particularly grisly battle, the spirit of air was captured and imprisoned within the ring of the enemy leader. Though battered and weakened, the aeris pushed on and fought life and limb for their cause. After a great deal of bloodshed, they managed to smash open the enemy's jewelry, thus freeing the spirit. When the enemy was about to smite the aeris to their doom, the spirit of air granted them feathers and the power to manipulate the wind. So, even though they could not truly fly, they triumphed over their enemies with their new powers.

Aeris grow up in the flock they are born to. These flocks are often migratory. They are schooled by the flock's elders. When they are 13, they are taught to hunt and provide for the flock, as they share communal services. At 18, they are given the choice to stay with the flock or leave. Aesir value the flock, freedom, and peace over all else. They are polite to outsiders but are slow to trust. Once you earn an aeris' trust they consider you part of the flock and are fiercely loyal. Those who betray this loyalty are branded a wolf's head, and any may kill and hunt them. Most aeris who leave their birth flock end up eventually making another flock with friends instead. They prefer to freely stay together rather than seek their own fortunes.

Aeris are given their true name at birth by the flock's elders. They will earn a nickname over their childhood and most outsiders will know an aeris only by their nickname. It is a sign of absolute trust to know an aeris' true name. Their true names are a series short, harsh consonants, but their nickname could be an attribute, goal, or a personality trait. There is no difference in names between sexes although some names are more widely used for one sex.

Former elven creatures made avian.
Ability Score Increase. Your Dexterity score increases by 2, and your Charisma score increases by 1.
Age. Aeris are mature at 18 and can live to be 100.
Alignment. Aeris value freedom and peace, so most are chaotic.
Size. Aeris are small and lithe, ranging from five to five and a half feet. Your size is Medium.
Speed. Your base walking speed is 30 feet.
Darkvision. You can see in dim light within 60 feet of you as if it were bright light, and in darkness as if it were dim light. You can't discern color in darkness, only shades of gray.
Good Eyesight. Your eyes were graced with the precision of a hawk. You are proficient with the Perception skill.
Feather Shot. Your feathers are capable of hardening into projectiles to shoot at a distance and can cause serious damage as your natural weapons. As an action, you can make a ranged weapon attack against a creature within 20 feet of you or 60 feet of you at disadvantage. If you hit you deal piercing damage equal to 1d4 + your Dexterity modifier.
Gust. You were granted the power to control the wind by the spirit of air. You know the gust cantrip and can cast it at will. Charisma is your spellcasting ability for this spell.
Small Wings. Your wings are not able to fly due to their size but they can protect you from a nasty fall. As a reaction, when you would take damage from falling, you can buffer your wings and instead take no damage.
Languages. You can speak, read, and write in Common and Auran.