Combine Advisors are the leader of the Combine on Earth. They rule through Dr Breen who is in fact, their slave. They are capable of launching numerous psycic attacks and can levitate other creatures in midair using telekinetic power. They resemble giant worms with no noticeable facial features and robotic arms. 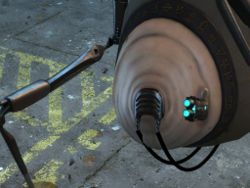 "Oh my god. That thing was hurt, did you see it! I could only imagine what it would have done if..."

Combine Advisors mostly use their psionic powers to render foes helpless, then bring them in to extract their brain and consequently, their knowledge as well. They can use their claws in a fight, although it's rare that they do, mostly because they don't do nearly enough damage to stand against a tougher foe in melee combat. If you are having trouble finding a way to implement such an unbalanced creature into your campaign, you can observe this video taken from gameplay.
View this video for an example of an Advisor's power.

Levitate (Ex) An Advisor is always levitating, keeping its large worm-like body off the ground at all times. This allows them to fly up to 150 ft in the air. This levitation abilaty continues without a needed concentration check.

Brain Extract (Ex) At will, an Advisor can use it's long tongue to forcefully extract an organic creature's brain. The creature must be within 5 ft of the Advisor and it must be helpless (caught by the Advisor's Telekenises) for it to extract the victims brain. This instantly kills the victim and heals the Advisor as many hp the victim had before death. This also causes them to extract memories from the victim.

Mind Ache (Ex) An Advisor can cause any creature within 100 ft to suffer a massive headace. The effected creature takes a -2 on all attacks, saves, and skill checks while within 100 ft of the Advisor.