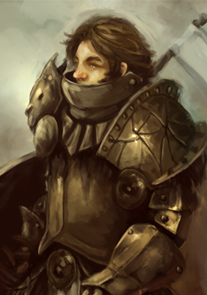 The tank. The brute. The thug. The bruiser. Whatever you call him, he is the warrior standing at the front of every battle. Against dragons, gods, vampires, and demons, his unyielding stance works as a wall to protect his comrades. This is the lot of a Vanguard. Trained from a young age for the rank and file, this soldier took to the defensive arts with an uncanny knack. Vanguards live on the front lines, in an army of hundreds, or a party of just a few. The Vanguard is made to be a part of a larger force, be it a party or an army. He exists solely to act as a buffer, a wall between the enemy and his allies. Alone, he can do no better than any other class. While a Vanguard can begin to deal consistent damage if it is required, this is usually reserved for an emergency.

Races: Dwarves make the most likely Vanguards, being of societies with the most carefully regimented armies, but Humans and Half-Orcs are fairly common among the ranks as well. Elves, Gnomes, and Halflings usually lack the proper dedication to master the defensive abilities.

Weapon and Armor Proficiency: A fighter is proficient with all simple and martial weapons and with all armor and shields (including tower shields).

Cross-Training (Ex): The Vanguard's training gives him a more advanced degree of familiarity and skill with melee and ranged weaponry. Vanguard class levels qualify for feats that usually require a minimum number of Fighter levels, such as Weapon Specialization. These levels stack with actual Fighter levels, so a Vanguard 4, a Fighter 4, and Vanguard 2/Fighter 2 would all qualify for Weapon Specialization.

Intercept (Ex): Whenever a projectile passes within 5 ft of the Vanguard, he can choose to move 5 feet into that space and become the target of the attack as an immediate action. The interception must be announced before the attacker rolls his attack. Vanguards can intercept attacks of both physical and magical nature.

Armor Mastery (Ex): At 2nd level, Vanguards are able to move in their armor so naturally that they reduce skill check penalties by 1 (minimum of 0) and increase the armor's maximum dexterity bonus by 1.

Boulder Stance (Ex): A vanguard knows how to defend himself against harmful spells by bracing himself, rather than dodging. At 3rd level, a vanguard has the option of gaining Spell Resistance equal to his AC instead of a saving throw, vs. any spell that deals hit point damage.

Bulwark of Defense (Ex): Vanguards' precision and skill in controlling the area around them is truly remarkable. From 5th level on, treat all the squares that a Vanguard threatens as difficult terrain. (Each square of difficult terrain counts as 2 squares of movement.)

Nerves of Steel (Ex): At 11th level, the Vanguard has been trained to stand fast in the face of danger, granting +4 vs any fear effects.

Living Wall (Ex): At 14th level, the Vanguard becomes even more skilled in protecting an area. Whenever someone attempts to move into a square within 5 feet of a Vanguard, the Vanguard may take a 5-foot step into only that space as an immediate action, forcing the other person to remain in his original space, ending his move action. If that space is not open, he becomes prone in the Vanguard's space.

Steadfast Mind (Ex): At 17th level, a Vanguard has steeled his mind against anything he may come across, granting +4 to will saves and immunity to fear effects.

Final Stand (Ex): At 20th level a Vanguard can put everything he has into protecting his friends. Once per day, as a swift action, the Vanguard can activate this ability, granting double hit points (current and max), and +6 to his attack bonus. This ability lasts 2d6 rounds. After the last round of Final Stand, your hit points drop by half (rounded down), bringing you back to normal. However, at any time during final stand, if you move, voluntarily or otherwise, the effect ends, reducing your hit points as stated above.

A Vanguard who becomes chaotic may not progress any farther in levels as a Vanguard until he regains a non-chaotic alignment.