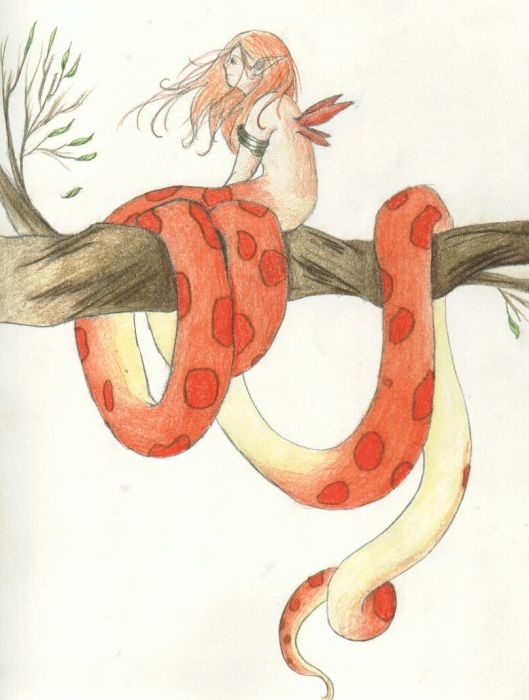 Were-anacondas have two forms, that of a human and of a gigantic snake. In human form, they are indistinguishable from the native inhabitants of South and Central America, with brown skin and dark hair. In snake form, were-anacondas grow from 25 to 30 feet in length. Their width can be as much as 15 inches. Their coloration varies from one creature to the next, but a broken pattern of shades of blacks and browns are typical. Despite its large size, the appearance of a wereanaconda in snake-form is not abnormal as normal anacondas occasionally grow to the same length. A wereanaconda’s eyes have slit pupils in both human and snake form, though this is only slightly noticeable while human.

Combat: Were-anacondas avoid combat unless in snake-form. They attack by dropping on their prey from above, or lashing out vertically at a target. The were-anaconda’s natural abilities for stalking prey gives it the equivalent of the Hunting proficiency. The were-anaconda’s natural camouflage and stealth grant it a base score of 16 in this skill, and they use this ability to gain surprise on their prey, both animal and human.

Once the were-anaconda strikes its prey, it constricts around the victim’s torso, automatically causing construction damage each round. A were-anaconda is long enough to be able to constrict up to two adult humans at one time. Freeing a victim from the snake’s constriction requires a combined Strength of 60 points. Anyone attacking a were-anaconda while it constricts a victim has a 20% change of hitting the victim instead. Though rarely used, the bite of a were-anaconda can inflect its prey with lycanthropy. For each point of damage inflicted with a bite, there is a 2% chance the victim contracts the disease.

Were-anacondas are only affected by weapons with at least a +1 enchantment, or by those weapons made from silver or the hardwood of the mahogany tree, called caobo by the locals. Were-anacondas also have an allergy to guava, and cannot stand the smell. A wereanaconda will not close within 20 feet of a guava tree, and will flee if sprayed with guava juice. The were-anaconda will not return until it has been able to wash off the smell.

Habitat/Society: Hereditary were-anacondas are unknown in the known domains of Ravenloft, but deceitful and malevolent beings of the Demiplane are occasionally cursed to become were-anacondas. Such maledictive lycanthropes can be of any class.

Occasionally a were-anaconda will establish his home near a small village. In this case, the local villagers tend to accept the were-anaconda’s presence, since it drives away other large predators that enter its hunting grounds. At the same time the villagers fear the wereanaconda and may try to placate him with various gifts, including livestock.

As mentioned above, were-anacondas kill or drive off any large predators, including snakes and other wereanacondas, that enter their hunting ground, usually a stretch of river one to two miles in length.

Ecology: Because were-anacondas rarely use their bite in combat, infected Anacondas are very rare. If an individual does become one of the few inflected were-anacondas, he will transform into snake form on the first night of each new moon and remain in that form until the third night of the new moon. During this time the were-anaconda hunts until it has eaten the equivalent of an adult human. As with a normal anaconda, it swallows its prey whole. Once an infected were-anaconda eats it prey, it enters a lethargic period, similar to that described above under the King Cobra. The were-anaconda’s lethargy lasts for six days.

The were-anacondas of Gothic Earth have no society of their own. The were-anaconda lives a solitary life, away from others of its kind and human settlements. Wereanacondas hate large crowds and will never willingly enter a large town or city. Typically they live as hermits in the rain forests of Central and South America. Because they prefer to hunt in or near water, were-anacondas usually make their homes near the large rivers and flood plains of the rain forests.

Maledictive were-anacondas are more common than one would believe. It seems to be a common curse that affects native mystics of Central and South America who fall under the attention of the Red Death.