Vilethrone is one of the essential parts of the Korad Kindom, and where at least half of the immigrants have landed the last hundred years. It is the seat of the Capital, Ecchlastical headquarters and some suppressed trading centras.

Vilethrones is mostly dirt and most of the forest and good soil is deeper in the Isle where there are numerous plains and monsters and even mad settlers turned into barbarian savages. 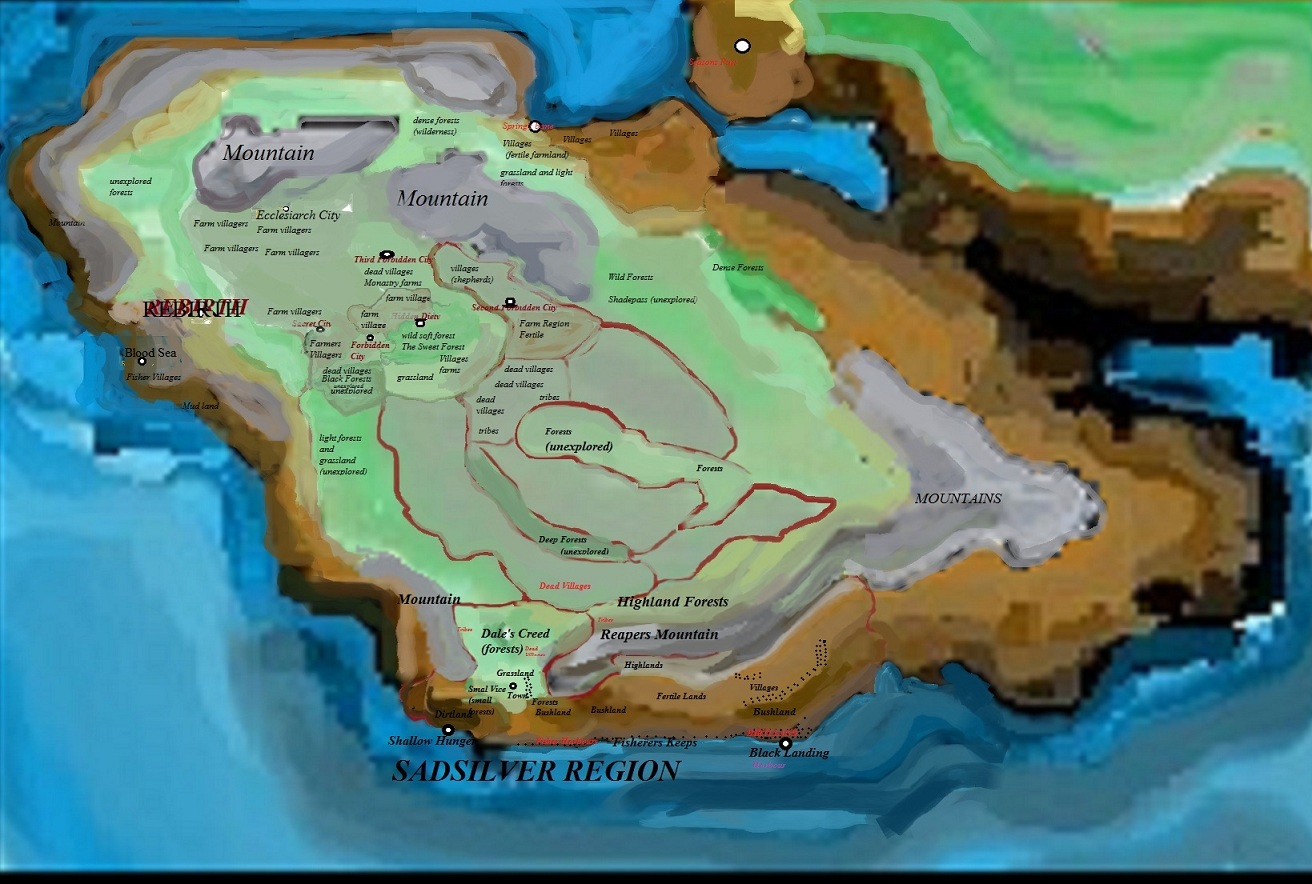 A crude map of Vilethrone

Vilethrone is the isle where some of the first Aeoryrans landed, others where carried away to, Seasons Pass or to Krakens Claw. The people where trapped so they started to build and that is why vile throne has some of the biggest settlements. The immigration increased after settlements discovered eachother, civil began early. There had been violence and murder ever since the first person got on a ship but this was different. Without law, people where at eachothers throat for a piece of food and all the priests went mad. Despite it all the folk managed to grudling overcome their differences with the help of the most cruel and cunning bastards who united and agreed not to destroy eachother. Anyone who wasn't a complete ass got duped in that meeting but it was "peace". Fisherers and peasant traders, build the capital Rebirth for the Monarchy, and some few town on the only solid grounds where you could build anything and the shores around the isle contain harbours for grain, fish and recieving the masses escaping Aeoryoryan but that before the King came and slaughtered the lot and burned his own capital for some reason. It didn't sit well with some of governours, when got the order to close all gates to the city and then burn Ribirth. He asked "but my Lord there are true believers in the city" becouse the reason given was religious, to fight the "heretics". Whatver that meant, no one new. The King replied: "Let God sort them out". The King had enforced feudalism some days before that, the Isle just as other places where split and distrobuted to part time-concripted hunters and tribal hunter-killers who waged civil war against the shepherds and farmers. These men become governours, I think there was a few soldiers among them and the occasional rich farmer. Those that didn't like what happened on the Isle and where powerfull enought to leave, left the Isle and settled on the mainland where formed the great Baronies. Yeah, some still remember and lots of nobles get certain ideas of vengeance from their fathers. The King and The Church conquered the isles cities and turned them into Holy Cities full with priests, monks and the Ecchlestical elite. To feed all these priests citizens that where unimportant enought to be spared and actually wheren't killed where send into serfdom and forced to produce food for the priests and the nobility. Ribirth where turned into one castle, one palace, some cathedrals and the other buildings mausoleums leading to catacombs under the city where most of the former population. Some hundred years later new cities have appeared claimed descent from the first purge, but that seems unlikely. This new lot of tradors are different sort of people. Some cities in Sadsilver seems to welcome and be ruled by these outsiders, I don't know becouse I never set my foot south of Bloodsea.

The Region around Rebirth, ruled directly by the Crown contain two razed cities. Bloodsea and Rebirth, Bloodsea is still a harbour and the path to Rebirth goes between an opening the in mountain chain. Most of the land around the city are farming communities to supply the Kings castle and his army. Rebirth is surrounded by mudplains and some forests that still have monsters in them that occasionally ride the city. The reduction of the cities to castles and such have invited several monsters and dire animals to infest them. The King and the Church only regard this as the true evil of any city.

The Church created tree marvelous cities of Clergical building based on the former cities. They are large and isolated, no one is allowed in except the elite of the Church and most of the populations have vows to never leave. They contain libraries of forbidden knowledge, religous art, universities for will be archbishops, monastries of servitor monks, writing and copying faculities. No actual new research or invention is allowed, but the secret cities advance within the perfection of the conventional. Unfortionatly, they still depend on hundreds of villages around the city that have to feed the holy cities with forced labout. A great deal of the serfs communities within the region are replaced by monasteries farming the land and supplying the cities. They all contain several catacombs filled with dead and monsters.

Hidden Diety, is a lesser city for Priests. It contains many dungeons created as pits or catacombs to bury the dead the Church have killed.

The capital of the Church, which is a meeting ground for the Church elite and entering the forbidden for most outsiders.

Shadepass is an huge, forested plain. The terrain is somewhat passable and open spots of high grass and many patches of green short forests. Shadepass is unexplored, and it's name refers to the fact that no settler have gone beyond the border to the forests that offers s pleasant shade. Shadepass is full of monster and strong and extraordinary animals of all kinds. There are no human live in that forest, that is a fact. Trees are never growing tight but things are growing everywhere.

Blackforest, is a tight growing forest with tall old trees where there are few patches of sun and the terrain is difficult to move through. All settlements near it have failed and been exterminated. The trees are almost as hard as metal and the ground is filled with natural traps. It is full with omnivorious treants and monstrous creatures and dire animals.

Sad Silver is a part of the south coast that is settled by a serie of fisheries and harbours that transport grains from farms as needed across the shores. It is named after the many group suicides that causes many settlements to just dissappear. Sadsilver contains two towns that are capable of secret trade on the black market. They usually not closely monitored by the King and have the shadow goverment of a city states.

Dale's Creed iare the plains in a mountan passage. There are some living settlements here and many dead settlements and the surviviors have turned into savages and live in tribes.

A small town, its large harbour invites many pirates and merchants which basically turns the town into a hiden city state.

A small city, with some secret trade, usually they steal or buy some surplus of food from the farmers which finance a a garrison of soldiers, some guilds and a council.

A pleasant forest much like Shadepass, short trees and easy terrain. It has generally a beutiful nature but it also have harder terrain and tall trees. It contains many monster and dangers.