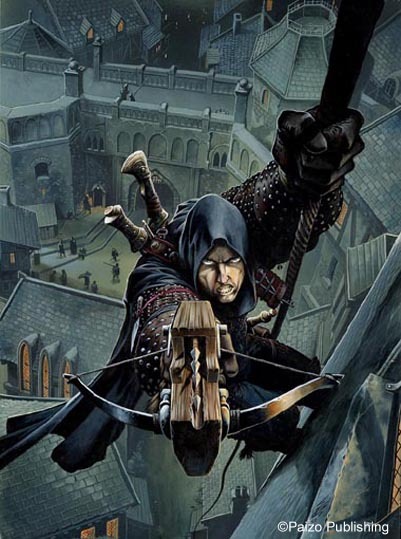 A vigilante aims to dispense some justice on the rooftops.

Vigilantes are willful individuals who take the law into their own hands. They very rarely work alongside proper law enforcement, though they have the same goals in the long run.

The vigilante is an excellent gatherer of information, and his high Charisma can make him an ideal face of the party. Most vigilantes favor ranged combat, where they can harry their foes before moving in for the take-down. Failing that, they try to work their way around the opponent where their sneak attacks can make a difference.

Some vigilantes have a no-kill rule, and leave foes unconscious or bound so law-keepers can come sweep up behind them.

Abilities: Dexterity and Charisma are the most important skills for the vigilante. Dexterity helps with stealth and properly aiming his shots, while Charisma aids his Gather Information, Diplomacy, and Intimidate skills. Strength is helpful when the vigilante engages in melee. Constitution is a useful attribute, as it allows him to survive longer. Wisdom and Intelligence are less important, though Intelligence allows for additional skills.

Races: The life of a vigilante can be taken up by any individual with a sense of justice, regardless of race.

Alignment: Lawful, Good, or both.

All of the following are class features of the vigilante.

Weapon and Armor Proficiency: A vigilante is proficient with all Simple and Martial weapons, as well as the whip, hand crossbow, and firearms if the setting allows for it. He is only proficient with Light armor and no shields.

Sneak Attack: If a vigilante can catch an opponent when they are unable to defend their self effectively from his attack, he can strike a vital spot for extra damage. The vigilante's attack deals extra damage any time his target would be denied a Dexterity bonus to AC (whether the target actually has a Dexterity bonus or not), or when the vigilante flanks his target. This extra damage is 1d6 at 1st level, and it increases by 1d6 every 4 Vigilante levels thereafter. Should the vigilante score a critical hit with a sneak attack, this extra damage is not multiplied. Ranged attacks can count as sneak attacks only if the target is within 30 feet. With a sap (blackjack) or an unarmed strike, a vigilante can make a sneak attack that deals nonlethal damage instead of lethal damage. He cannot use a weapon that deals lethal damage to deal nonlethal damage in a sneak attack, not even with the usual –4 penalty. A vigilante can sneak attack only living creatures with discernible anatomies--undead, constructs, oozes, plants, and incorporeal creatures lack vital areas to attack. Any creature that is immune to critical hits is not vulnerable to sneak attacks. The vigilante must be able to see the target well enough to pick out a vital spot and must be able to reach such a spot. A vigilante cannot sneak attack while striking a creature with concealment or striking the limbs of a creature whose vitals are beyond reach.

Improved Unarmed Strike: The vigilante is considered to be armed even when unarmed—that is, he does not provoke attacks of opportunity from armed opponents when he attacks them while unarmed. However, he still gets an attack of opportunity against any opponent who makes an unarmed attack on him. In addition, his unarmed strikes can deal lethal or nonlethal damage, at his option. His unarmed strike does 1d6 damage.

Improved Grapple: The vigilante does not provoke an attack of opportunity when he makes a touch attack to start a grapple. He also gains a +4 bonus on all grapple checks, regardless of whether he started the grapple.

Combat Expertise: When the vigilante attacks in melee, he can take a penalty of as much as –5 on his attack roll and add the same number (+5 or less) as a dodge bonus to his Armor Class. This number may not exceed his base attack bonus. The changes to attack rolls and Armor Class last until his next action.

Evasion: If subjected to an attack that allows a Reflex save for half damage, the vigilante instead takes no damage on a successful save. As with a Reflex save, he must have room to move in order to evade. Evasion is a reflexive ability. The vigilante doesn't have to know the attack is coming to use evasion, but he can't use evasion when helpless.

Improved Disarm: The vigilante does not provoke an attack of opportunity when he attempst to disarm an opponent, nor does the opponent have a chance to disarm him. He also gains a +4 bonus on the opposed attack roll he makes to disarm his opponent.

Disarming Shot: The vigilante is able to make a disarm attempt with a ranged weapon. The save to avoid this is Reflex based with a DC equal to the vigilante's attack roll.

Iron Will: The vigilante gets a +2 bonus on all Will saving throws.

Interrogation Techniques: The Vigilante gains a +2 bonus to Diplomacy, Intimidate, and Gather Information.

Sundering Shot: The vigilante is able to make a sunder attempt with a ranged weapon. The save to avoid this is Reflex based with a DC equal to the vigilante's attack roll.

Run: When running, the vigilante moves five times his normal speed if wearing medium armor or lighter and/or carrying no more than a medium load, or four times his speed if wearing heavy armor and/or carrying a heavy load. If he makes a jump after a running start (see the Jump skill description), he gains a +4 bonus on his Jump check. While running, he retains his Dexterity bonus to AC.

Aura of Courage: Beginning at 7th level, the vigilante is immune to fear (magical or otherwise). Each ally within 10 feet of him gains a +4 morale bonus on saving throws against fear effects. This ability does not function if the vigilante is unconscious or dead.

Deadshot: The vigilante's marksmanship has improved such that he can add half his Dex modifier to ranged damage rolls.

Improved Evasion: Improved evasion is like evasion, except that even on a failed saving throw the character takes only half damage.

Rope Trick: The Vigilante gains a +4 bonus to his Use Rope checks. He may also treat any whip or suitable length of rope as a grappling hook.

Improved Interrogation Techniques: The bonus to Diplomacy, Intimidate, and Gather Information increases to +6.

Improved Aura of Courage: The bonus against fear effects increases to +8.

Improved Deadshot: The vigilante may now add his full Dex modifier to his ranged damage rolls.

Uncanny Dodge: The vigilante retains his Dexterity modifier to AC at all times, unless immobilized in some way.

Aura of Justice: An upgraded version of Aura of Courage. This aura functions as a Zone of Truth with a 10-foot range centered on the vigilante. It also give any allies within 30 feet of the vigilante a +1 morale bonus on saves and attack rolls.

Perfect Deadshot: The vigilante may now add one and a half times his Dex modifier to his ranged damage rolls.

Improved Uncanny Dodge: The vigilante can no longer be flanked. The only exception is if the character attempting to flank the vigilante has sneak attack and is 4 or more levels higher than the Vigilante.

Improved Aura of Justice: The range of the Zone of Truth increases to 20 feet, and the morale bonus to saves and attack rolls increases to +2.

A vigilante who willingly harms an innocent person loses his Aura of Courage/Justice until he can atone for his actions.

Religion: Vigilantes aren't known for being religious, but it depends on the particular individual.

Other Classes: Vigilantes get along well with anyone who doesn't question their methods. They can get along well enough with rogues, but just because a vigilante doesn't think the law does a good job doesn't mean he abides people breaking it.

Combat: In combat the vigilante is always attempting to flank their opponent. They try to get the ideal position for dealing as much damage as they can, then taking the enemy alive with their whip/lasso.

Daily Life: Vigilantes spend most of their days tracking down outlaws and criminals who have avoided the justice system.

Organizations: Vigilantes, by nature, are averse to being part of an organization. On the rare occasion they do join one, it would most likely consist of other vigilantes, or at least allow them to have complete autonomy.

NPC Reactions: Some view vigilantes as mere troublemakers. Others recognize them for what they are: people dedicated to bringing justice to those who deserve it, regardless of the restrictions of the law.

Vigilantes in the Game[edit]

Vigilantes can be found anywhere there are criminals who need stopping.

Adaptation: The vigilante class could be used for an actual lawbringer, such as an American 1800's sheriff. They could also be a superhero in a modern-day metropolis, or rewritten to be Evil and use their Dominate abilities for their own personal gain.