Don The Valiant charges into the field shouting a battle cry, shield and sword in hand, he slams against his enemy. As he pushes forward he slays nine warriors in his path, he looks to the hills as the enemy flees he says, "Bah! you cowards!" tauntingly. Don's warriors follow after the fleeing enemy, he goes to his king's side and praises him for the decisive victory. Out of the corner of his eye, he sees an archer with an arrow knocked and aiming it at them. He takes a passing warrior's spear and launches it at the archer's chest piercing right through, but not before the arrow hits him through the heart. Having saved the king's life but not his own, Don's mind begins to fade into blackness. Out of the darkness shines a bright light, Don reaches for it and his soul is pulled out of his body, he looks at hand clasped with a woman's hand, strong yet delicate. A woman clad in silver and gold armor, wings of pure white and golden hair wielding sword and shield with strange markings, stands before Don. "A hero, bravest of all the warriors on this field today. I open the gates to Valhalla for you, honored one." She speaks to Don in a voice that makes him feel warm and comforted. Don nods and the woman takes him into her arms, with a flap of her wings they ascend high above the clouds and Don falls asleep to what feels like an endless journey. When Don wakes up again he is standing in front of a large man. He has a giant beard, an eye-patch, golden armor so bright it's blinding, and a golden scepter in his hand with the woman beside him. The winged female kisses his cheek and flies off leaving the scent of sweet apple behind her.

The Valkyrie is a class developed with a theatre of war mindset. This class is complex with many abilities that can turn battles in an instant. There are a lot of mentions and ties to Norse Lore and Mythology, it would be advised to put forth some effort to research so you know what your dealing with. Valkyries themselves have a very strong sense of duty, honor, and authority in the field of battle, at home, or elsewhere and typically inspire reverence and courage in others just by their presence. Valkyries tend to fall mostly along the Good and Lawful axis of alignments but can be anything including evil. So enjoy building and becoming not only a very powerful warrior but one that invokes great awe in her allies and dread in her enemies. 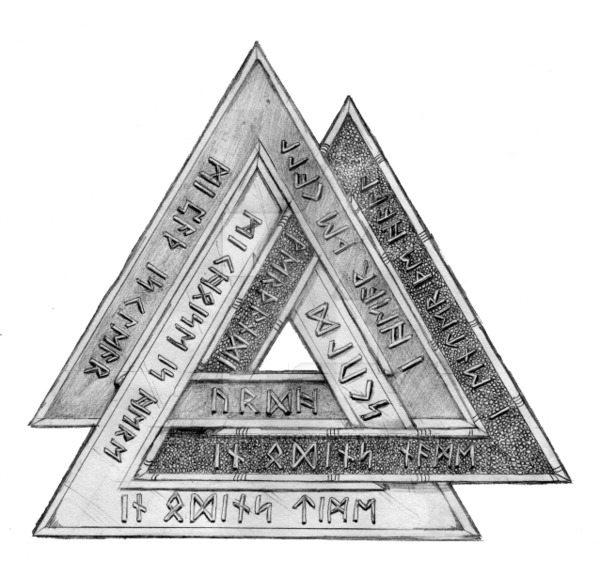 The Valknut (Pronounced "VAL-knoot"), the symbol for life, death, the transition between, rebirth, and Odin

As a Valkyrie you gain the following class features.

Every Valkyrie swears an oath, either to Odin or Freyja. Each of which grant different powers to their Loyal subjects. While both grant their subjects exceptional combat prowess Odin's power leans toward wrath while Freyja's leans towards protection. Your choice grants you features at 1st level and again at 3rd, 6th, 9th, 10th, 14th and 15th.

At 2nd Level you have been granted the ability to sway the aftermath of battle and jurisdiction over the souls of allies in combat. Allies of your choosing can’t have their soul taken by any means or be reanimated as undead without your permission and have advantage on the first death saving throw they make when falling unconscious.

Beginning at the 7th level a pair of Polished Silver Steel feathered wings sprout from your back and can be used to fly. You gain a flight speed equal to your walking speed. You may use a reaction when targeted by an attack or spell to shield yourself with these metal wings giving yourself resistance to the damage from that attack. You gain an additional 10 feet of flight speed at the 13th and 17th level

Beginning at the 11th level, while flying, if you move more than 20 ft in a straight line towards a target and hit with a weapon attack you can roll an additional weapon damage die when determining damage.

When you reach 13th level your flight speed is increased by 10 feet.

Beginning at the 17th level when you use Death from Above you may now roll an additional two damage dice. You do not provoke attacks of opportunity while using the feature as long as you remain in motion

When you reach 17th level your flight speed is increased by 10 feet.

Beginning at 18th level, you can attack thrice, instead of twice, whenever you take the Attack action on your turn.

Upon reaching the 1st level Odin imparts a part of his expertise with Polearms. You gain a +2 bonus to damage and attack rolls with Javelins/Spears/Glaives/Halberds/Lances and Pikes

Upon reaching 3rd level While in Combat, as a bonus action you may scream out Valhalla and choose up to 6 friendly creatures that can hear you. These creatures gain temporary hitpoints equal to your level Times your CHA modifier rounded up (minimum of 1). You have one use of this ability and regain its use on a long rest.

Veteran Maiden of the Spear[edit]

Upon reaching 6th level Odin imparts the knowledge of striking enemies who dare harm your allies unto you. You gain an additional reaction. As a reaction you can make a melee weapon attack against any creature within range of you than has attacked another.

Upon reaching 9th level, Any weapon that ‘Maiden of the Spear’ applies to may now be used as a thrown weapon with a range of 20/60. Up to a number of times equal to your CHA modifier + 1 (min 1), you may infuse a melee or ranged weapon attack using one of the aforementioned types with Thor’s Lightning dealing an extra 3d8 Lightning damage. You restore these uses upon a long rest.

Upon reaching the 10th level you've learned to channel a portion of Odin's wrath. When an ally is knocked Unconscious you may cry tears of blood and swear vengeance. You have advantage on attacks made against the creature you swore vengeance against and penetrate resistance and immunity. This effect expires once that creature is killed or combat ends. You may use this ability once per short rest.

Venerated Maiden of the Spear[edit]

Upon reaching the 14th level Odin grants you skill with the spear that only a true warrior of Asgard may posses. Your can use Glaives/Halberds/Pikes as one-Handed weapons but damage become 1d8 and Javelins/Spears/Lances gain one damage die. Your reach increases by an additional 5ft when using Javelins/Spears/Glaives/Halberds/Lances/Pikes and you gain a third reaction.

Upon reaching the 15th level your wrath against those who would dare go against your judgement manifests itself in a twirling tornado of fire. As an action you may summon a swirling vortex of Golden Asgardian fire. The vortex has a 15ft radius, deals 10d8 fire damage and affects only creatures that have attacked a creature you consider to be friendly. The area within the vortex is heavily obscured for all creatures within. Upon entering the vortex the creature make a DC 20 Dexterity saving throw or be trapped within the vortex. Once a creature it trapped in the vortex it takes 10d8 fire damage, It takes the same 10d8 fire damage if it ends it turn within the vortex. A trapped creature can use its action to make a DC 20 Strength saving throw to escape from the vortex, upon success the creature is launched 1d10 feet in a random direction from the edge of the vortex. The vortex must be maintained as if it was a concentration spell and can be moved 30ft, along with any creatures trapped within, as a bonus action. You may use this ability once per long rest.

Maiden of the Sword and Shield[edit]

Upon reaching the 1st level Freyja imparts a part of her expertise with the Sword and Shield. When you roll a 1 or 2 on a damage die or dice for an attack you make with a shortsword/longsword, you can reroll the die and must use the new roll, even if the new roll is a 1 or a 2.

At 3rd level as a bonus action you may whisper the name of Freyja’s great Hall. You may choose a number of creatures equal to you CHA modifier that you can see. A silver glow envelops them and they gain a +2 to AC for 1 minute. Your CHA modifier determines the number of uses for this ability. You regain all uses on a Long Rest.

Veteran Maiden of the Sword and Shield[edit]

Upon reaching 6th level Freyja imparts more of her expertise with the Sword and Shield. You gain an additional reaction. You may use a reaction to give the benefits of your shield to an adjacent creature for your choice.

Your power over life and death in the battlefield now extends to your very strikes. At 9th level, when you hit with a melee weapon attack you may choose to deal an extra 3d8 radiant damage and heal any friendly creatures of your choice within 15 feet an amount equal to half the radiant damage dealt. You may use this ability a number of times equal to your CHA modifier + 1 (min 1). You regain all uses after a Long Rest.

Upon reaching the 10th level you've learned to channel a potion of Frejya's protective nature. As an Action you approach an unconscious creature and cry golden tears that seep into their wounds. The creature regains their level plus their Constitution modifier in hit points. You may use this ability once per short rest. You must be adjacent to the creature to use this feature on them.

Venerated Maiden of the Sword and Shield[edit]

Upon reaching the 14th level Freyja grants you skill with the sword and shield that only a true warrior of Asgard may posses. As a bonus action you can bash an enemy with your shield. The shield is treated as a weapon you are proficient in and uses your STR modifier for attack and damage bonuses. It deals 1d8 + STR damage on hit and the target is forced to make a CON saving throw with a DC of 8 + your prof + your STR or be stunned until the start of it’s next turn.

Upon reaching the 15th level your devotion to protecting your allies has grown so strong that Freyja has taught you how to summon the great hall of Fólkvangr itself. You summon an ethereal hall whose dimensions cannot exceed 100ft x 60ft x 60ft. Any creature of your choice within the hall cannot be charmed or frightened and gains 2d8 hitpoints at the start of each round and when the hall is summoned. The hall lasts for 1 minute. You may use this ability once per long rest.