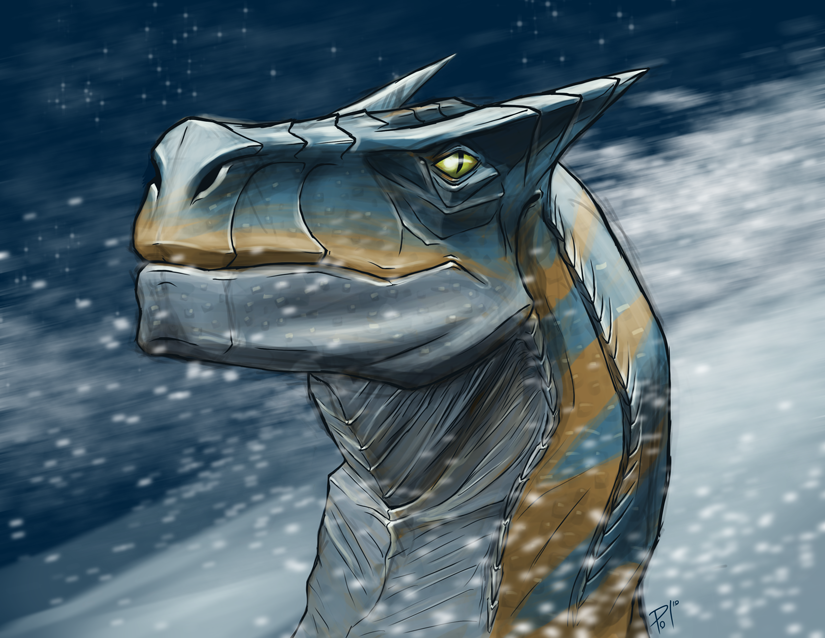 You see, rounding a large hill that offers respite from the swamp, a large tan-colored lizard. It roars at you, its eyes bulge madly, and it begins its approach, tossing aside a basking gator as though it was a small twig.

The Tigrex is a powerfully built beast with bulging muscles and scaly hide as thick as Bulette plate. Like most wyverns, the Tigrex has two back legs, a long thick tail and a two front arms which also are its wings. Though unable to spew fire or lightning from its mouth the powerful jaws are known to be able to snap through Plate-Mail like an axe snaps a twig. Its wings have developed into long forearms covered in thick scales and its hands have become more pronounced with long hook-like claws made for puncturing the thick hides of its prey and holding on. It often has unusual colourations across its hide ranging from pink and red to purple and blue and anything in between. Though technically still able to use its wings to fly, their purpose has been diminished and they are used primarily to glide.

A Tigrex's den is often high up on cliffs or mountains, where they have a good view of the surrounding area, and are often inaccessible to those unable to climb near sheer rock surfaces. On some occasions, a Tigrex will invade a Dragons lair and kill it so that it may have the lair for itself. In these circumstance change the Tigrex's treasure reward to that of the dragon it killed.

The Tigrex can speak Draconic but will tend not to speak to lesser beasts such as humans. It has an incredibly defined personality and believes that it is the very manifestation of the majesty of brutality.

In combat, the Tigrex is a brutal fighter with no regard for honor. It will attack opponents who have their defenses down at any opportunity and will not cease attacking an individual who has surrendered. Unlike many creature of higher than animal intelligence, the Tigrex abhors strategy and tactics, preferring an brutal bare-knuckle fight to any form of ambush or trickery. As such, the Tigrex often roars loudly before battle. Only when extremely hungry will a Tigrex employ any kind of stealth.

Poor Flying: Because the Tigrex's wings are so devolved and small, they cannot be used to properly fly. On top of all of the problems faced by a creature with Poor flying maneuverability, the Tigrex cannot increase its altitude by any means and decreases in altitude by a rate of 5 feet per minute.

Strange Hide: (Ex) The Tigrex's hide is highly resistant to magic and energy, affording it Spell Resistance 20 and Damage Reduction 15 against all forms of energy (acid, cold, electricity, fire, or sonic.)

Scattering Overrun: Should the Tigrex's Overrun check exceed the defenders by more than 10 points, the defender is hurled 15 feet, plus 5 feet per size category smaller than the Tigrex, plus 5 feet per 5 points the Tigrex beat the Defenders check past the initial 10, forwards or to the side (Tigrex chooses which direction they are thrown), reaching a height 2/3's the distance traveled and taking appropriate falling damage. In addition, the Tigrex can make an overrun check for each opponent within his reach along his path. Any failed checks against opponents who are not the primary targeted opponent do not get to react and attempt to knock the Tigrex prone.

For example, a Huge Tigrex makes a charging overrun attack against a group of 4 adventurers, one of whom is a gnome. He targets the Gnome, who is the furthest away. On his path he would cover two of the humans before the gnome. He rolls his dexterity opposed by their strength. The Tigrex rolls 1d20+20 (+8 Dex, +8 Size, +4 Improved Overrun) against the defending 1d20+2 (+2 Str) The first human rolls a natural 14+2 (16) and the Tigrex rolls a natural 1+20 (21) meaning the human falls prone but did not get thrown away. The second human rolls a 12+2 (14) against the Tigrex's 15+20 (35) meaning the Tigrex beat the opposing score 11. The human is launched 25 feet to the Tigrex's right, reaching 16 feet in height and taking 1d6 falling damage which he is entitled to a tumble check to negate. The gnome rolls a strength check at a -3 (-4 for size and +1 for strength) and gets 6-4+1 (3) against the Tigrex's 16+20 (36). The Tigrex beat the Gnome by 33. After the initial 10 required to toss the Tigrex beat the Gnome by 23. The Gnome is hurled an extra 20 feet on top of the 15 base and the 15 for being 3 sizes smaller than the tigrex and is launched 50 feet backwards and reaches 33 feet in height, dealing 3d6 falling damage.

Fast Healing 2: (Ex) Because of the Tigrex's enhanced metabolism and improved clotting platelets and scar forming tissues, it has Fast Healing 2.

Adrenaline Surge: (Ex) As a free action at any time, though often after taking damage, the Tigrex can release an adrenaline surge. This increases the Tigrex's Dexterity by 10 and its Strength by 6. It also increases the Fast Healing rate from 2 to 4. This effect persists for 2d6+8 rounds after the Tigrex activates it. It may not flee during this time and must make all actions possible to kill its attackers. The Tigrex can perform this action once per day or after any 4 hour period of uninterrupted rest. After the Adrenaline Surge has worn off, the Tigrex has been known to flee once it has realized how much damage it sustained while it was unable to stop fighting.

Adrenaline Overflow: (Ex) Adrenaline Overflow activates when the Tigrex reaches anywhere between 20 and -20 HP (Any hit that brings a Tigrex from above 20 HP to below -20 HP in one hit negates this ability). Adrenaline Overflow lasts for 1d10+4 rounds and increases the Tigrex's Dexterity and Strength by 10 and gives it the effect of being under a Haste Spell as well as allowing it to reach any negative HP value without falling unconscious or dying. At this point, the Tigrex cannot flee and must fight until it dies, compelled by its killing nature. Even if the Tigrex's Fast Healing would bring its HP value back above -10 the overload of adrenaline, as well as the combination any number of performance and aggression enhancing hormones released by its pituitary glands, kills the Tigrex after the determined number of rounds.