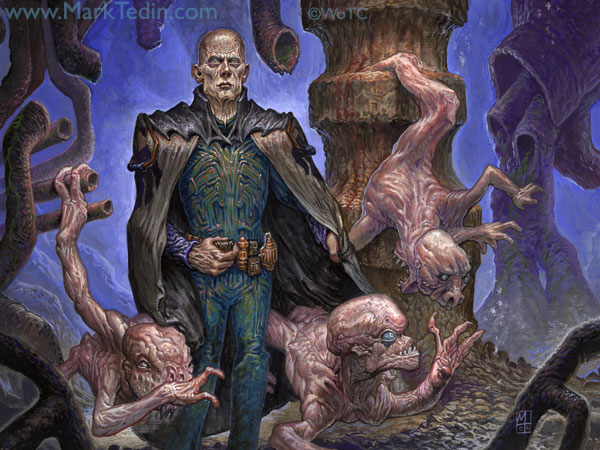 These twisted creatures were literally bred to die, ensuring their masters an unlimited supply for their human sacrifices.

Over time these masters learned to put them to over use, as well as the torturous, and disturbingly swift assimilation of captured slaves; regressing in a matter of days to become Thrulls themselves.

Thrull is an acquired template which may be applied to any corporeal humanoid, monstrous humanoid, Giant, or outsider with intelligence 3 or greater. Thrulls who become undead retain their Thrull Template.

Thrulls will usually attack solely with any natural weapons they possess, even if superior manufactured weapons are available.

Twisted Nature: Thrulls do not die if their ability scores are reduced to 0 or less. Instead, they treat any score of 0 or less as though they had a non-ability, or a score of --, until that ability is raised to 1 or greater. If the Thrull has any special abilities which were previously based on this non-ability score (likely intelligence or charisma), they may continue to use those abilities, but take a -5 on any DC, or d20 roll regarding that ability.

Indentured fortitude: +4 bonus on fortitude saves against poison, disease and paralysis. -1 on all saves against spells, spell-like abilities and supernatural abilities.

A Thrull character may choose, in lieu of taking a level in any character class, to gain a d8 hit die. this hit die grants 2 skill points, all poor saves, and +1 BAB.

-1 Additionally, a creature with character levels which becomes a Thrull immediately loses 3 levels, but may continue gaining levels normally if they choose.

Thrulls are not advised for player characters.