Three-headed hydras are the youngest and weakest of hydras and are referred to as "baby hydras." They are known to stay to themselves, but they have been known to ambush their fair share of small caravans every now and then. Usually sly and sneaky, they will try to flee if the fight is brought to them, or they will try to make themselves look tougher than they really are, a common mistake for those who aren't aware of this trick. 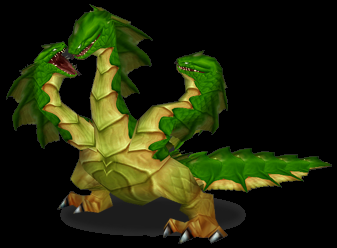 A typical three-headed hydra fights amongst itself

A three-headed creature covered in dull gray, brown and green scales suddenly leaps from the brackish water and snaps at your face.

Hydras are reptile-like monsters with multiple heads. A hydra is gray-brown to dark brown, with a light yellow or tan underbelly. The eyes are amber and the teeth are yellow-white. It is about 10 feet long and weighs about 2,000 pounds. Hydras do not speak.

Hydras can attack with all their heads at no penalty, even if they move or charge during the round.

A hydra can be killed either by severing all its heads or by slaying its body. To sever a head, an opponent must make a successful sunder attempt with a slashing weapon. (The player should declare where the attack is aimed before making the attack roll.) Making a sunder attempt provokes an attack of opportunity unless the foe has the Improved Sunder feat. An opponent can strike at a hydra’s heads from any position in which he could strike at the hydra itself, because the hydra’s head writhe and whip about in combat. An opponent can ready an action to attempt to sunder a hydra’s head when the creature bites at him. Each of a hydra’s heads has hit points equal to the creature’s full normal hit point total, divided by its original number of heads. Losing a head deals damage to the body equal to half the head’s full normal hit points. A natural reflex seals the neck shut to prevent further blood loss. A hydra can no longer attack with a severed head but takes no other penalties.

A hydra’s body can be slain just like any other creature’s, but hydras possess fast healing (see below) and are difficult to defeat in this fashion. Any attack that is not (or cannot be) an attempt to sunder a head affects the body.

Targeted magical effects cannot sever a hydra’s heads (and thus must be directed at the body) unless they deal slashing damage and could be used to make sunder attempts.

Fast Healing (Ex): Each round, a hydra heals damage equal to 2 + the number of its original heads.

Weakened Head Regrowth (Ex): Although a three-headed hydra can regrow heads just like more powerful forms, it can only regrow 1d4-1 (limit 1) heads per encounter.

Skills: Hydras have a +2 racial bonus on Listen and Spot checks, thanks to their multiple heads.

A hydra has a +8 racial bonus on any Swim check to perform some special action or avoid a hazard. It can always choose to take 10 on a Swim check, even if distracted or endangered. It can use the run action while swimming, provided it swims in a straight line.

Feats: A hydra’s Combat Reflexes feat allows it to use all its heads for attacks of opportunity.

These reddish hydras can breathe jets of fire 10 feet high, 10 feet wide, and 20 feet long. All heads breathe once every 1d4 rounds. Each jet deals 2d6 points of fire damage per head. A successful Reflex save halves the damage. The save DC is 10 + 1/2 hydra’s original number of heads + hydra’s Con modifier.

Fire attacks cannot prevent a Pyrohydra’s stump from growing new heads (since a Pyrohydra has immunity to fire), but 5 points of cold damage does.

These purplish hydras can breathe jets of frost 10 feet high, 10 feet wide, and 20 feet long. All heads breathe once every 1d4 rounds. Each jet deals 2d6 points of cold damage per head. A successful Reflex save halves the damage. The save DC is 10 + 1/2 hydra’s original number of heads + hydra’s Con modifier.

Cold attacks cannot prevent a Cryohydra’s stump from growing new heads (since a Cryohydra has immunity to cold), but 5 points of fire damage does.