A Covenantblade is formed from a celestial being empowering the warlock with an inner light of their very own. The patron could be an angel, a seraphim, a cherub, or some other celestial creature. Empowered as a crusader your divine sword in hand the covenantblade marches on. 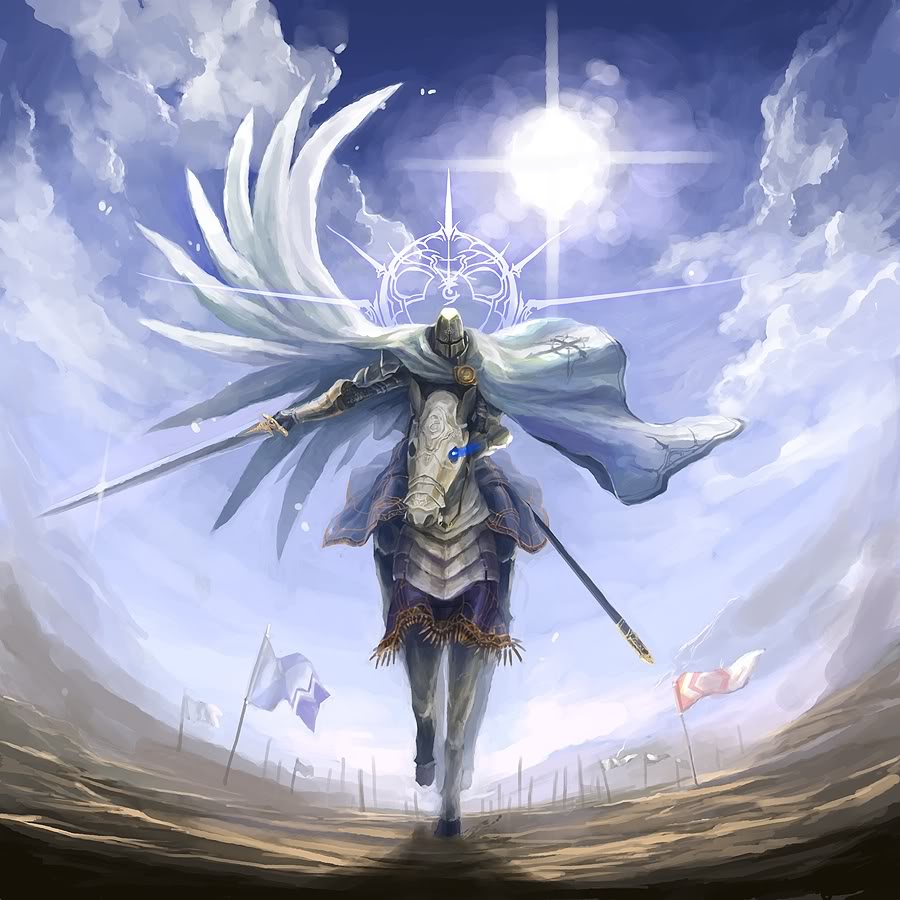 The crusader seeks to expand their lords reach with every breath.

The following spells are added to the warlock spell list for you.

At 1st level, you gain proficiency in martial melee weapons. Also you learn the cantrips Blade Ward and Sword Burst these cantrip does not count against your total known cantrips.

Also at 1st level, your Empowered touch can heal wounds. You have a pool of healing power that replenishes when you take a long rest. With that pool, you can restore a total number of hit points equal to your warlock level × 5.

As an action, you can touch a creature and draw power from the pool to restore a number of hit points to that creature, up to the maximum amount remaining in your pool.

Alternatively, you can expend 5 hit points from your pool of healing to cure the target of one disease or neutralize one poison affecting it. You can cure multiple diseases and neutralize multiple poisons with a single use of Relieving Grace, expending hit points separately for each one.

This feature has no effect on constructs.

Finally at 1st level, a covenantblade can touch their own held weapon as a bonus action and infuse it with celestial energies. A weapon blessed like this remains powered until the end or your next turn. The effects are that this weapon now does an additional 1d6 of radiant damage on a successful attack roll. Additionally the wound glows as if under the effect of the light cantrip. This action may be taken a number of times equal to the CHA (Min 1) + Proficiency modifier (Min 1) this resets half way after a short rest or fully after a long rest this power grows in strength at level 5 (2d6) 10 (2d8) and 15 (2d10)

Starting at 6th level, you can use an action to protect those near(30ft) and dear to you up to your warlock level plus proficiency modifier. When you do this your weapon shatters to dust and flows surrounding your chosen targets. Attacks made against these targets have disadvantage. This effect lasts for 1d4 rounds. During this time the Covenantblade weapon is unusable and any successful hits on you requires a concentration check. On a failed save the weapon dust scatters and no longer provides protection. You still get your weapon back at the end of the duration. This may used twice per long rest.

At 10th level, though you may not be of divine blood your pact has let the celestial energies change you. You now age slower at a rate of one year for every ten, also you may no longer be magically aged. Additionally you are immune to poison and disease. Also by using a bonus action, you can manifest a pair of angelic wings from your back. While the wings are present, you have a flying speed of 60 feet. The wings last until you're incapacitated, you die, or you dismiss them as a bonus action.

At 14th level, you have obtained enough power from you patron that you have become a living saint. Your damage dealing spells now can deal radiant damage in addition to any damage type it does (however without an extra die, but another type of damage being dealt). Additionally as an action you can awaken the power inside you causing your skin to glow from within, this glow lasts for a minute and during this time your movement speed is increased by 10ft. You may also make an extra attack while you are in this state and while in this state your attacks are treated as if under the effect of the ability "The Radiant Light" Once you use this ability you suffer a level of exhaustion and may not do so again until you have completed a long rest.

You may call forth two weapons and gain proficiency with both

You may use Relieving Grace at range 30ft

When you choose the Pact of the Blade at 3rd level, you substitute you CHA modifier instead of STR or DEX when using your Pact Weapon

Pact of the Chain: Familiar Variant[edit]

Whatever creature you summon is effected by your light. These creatures can use your Relieving Grace for you.