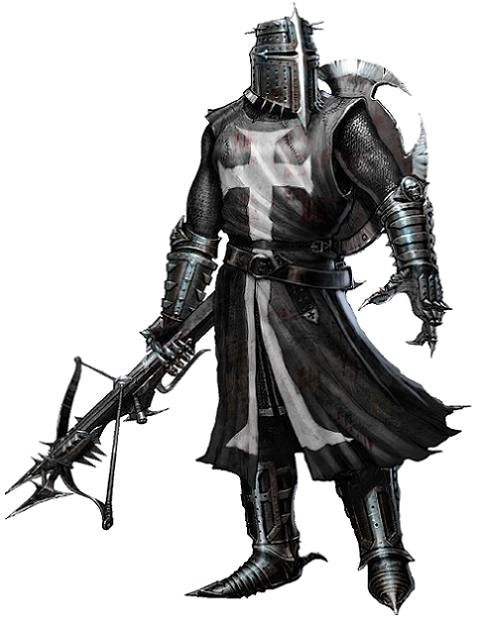 A black knight prepped for battle...

Black Knights are a vicious breed of fighter who are typically servitors of evil necromancers or are themselves dabblers in the blackest of arts. Many naturally decide to become blackguards as they fully embrace the wickedness within. Fighters of any race may become black knights, but humans, dwarves, tieflings, and half-orcs are the most notorious candidates.

All of the following are features of the black knight's fighter substitution levels.

Intimidating Demeanor (Ex): You are treated as being one size category larger for purposes of determining the area you threaten regarding the use of the Intimidate skill, as well as for defending against bull rush, overrun, or trip attempts. You may also use your Strength modifier in place of Charisma when using the Intimidate skill.

Demoralizing Glare: You may use Intimidate as a swift action, but only for the purposes of demoralizing. This feature costs 2 skill points to learn, much like a skill trick.

Mutable Anatomy (Ex): You have delved into the dark recesses of necromancy and learned how to shift your internal organs around in order to make yourself less vulnerable to attack. This makes you significantly more resilient against precision damage, giving you a 75% chance to ignore the extra damage caused by such attacks. This immunity diminishes by 25% for each additional precision attack made by the same attacker, however, to a minimum of 0% after three successful strikes. This ability stacks with other similar traits to a maximum of 100%. In exchange, all future hit dice are reduced one step regardless of what classes (prestige or otherwise) you choose to pursue.