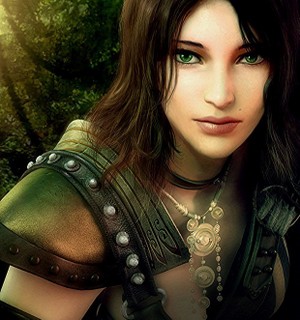 A Sylvan Knight, posing for a portrait. (See the note on Wiki Media)

A Sylvan Knight is a warrior of the fey, and the forest. The human who seeks to burn their forest, or the outside who seeks to claim it are their sworn enemies, and as such they are gifted with the abilities to control plant and wildlife, even choosing to take an animal shape at times.

Sylvan Knights are middle-field classes. They can take a small amount of punishment, and dish it out as well. They are not particularly grand spellcasters, but the spells they know can prove useful to aid them, and their allies. Sylvan Knights respect the natural, and the unnatural evenly, but when one threatens their home, and what they believe, an enemy is made, and hunted down ruthlessly.

Abilities: Strength, and Wisdom are the two primary factors for a Sylvan Knight. Strength affects their combat prowess while Wisdom affects their ability to cast, and maintain any Druidic spells they know. Dexterity and Constitution are wise investments while Intelligence and Charisma can tend to suffer.

Races: It is uncommon for any but elves, fae, and half-elves to join the Sylvan Knight class, though there are rare exceptions.

Alignment: A Sylvan Knight must be Neutral on the Lawful/Chaotic axis, though they are free to choose from the Good/Neutral/Evil axis.

A Sylvan Knight takes a more middle-ground combat and divine spell caster ground. They are the Paladin of the Fae, in essential speech.. All of the following are class features of the Sylvan Knight.

Weapon and Armor Proficiency: A Sylvan Knight may use all Simple, and two Martial Weapons of their choice, so long as the material they are made with comes from their own plane. An Outsider's weapon, or a weapon made of another plane's materials is forbidden to the Sylvan Knight. A Sylvan Knight may wear Light, or Medium Armor, and may carry a shield (except Tower Shields.) Armor does not effect their ability to cast divine spells from the Druid list.

Nature's Oath (Ex): A Sylvan Knight swears an oath to defend the natural plane upon which they exist. Abiding by someone destroying, without good cause or reason, anything created naturally causes the Sylvan Knight to lose her prepared spells for the day, and to be fatigued for 1d4 hours after witnessing the desecrating act.

Friend of the Fae (Ex): Fae feel a kinship to Sylvan Knights, and unless provoked are always Neutral, or Friendly to any group traveling with a Sylvan Knight.

Mission of the Fae (Ex): Sylvan Knights whom take the Leadership feat may freely pick from fae at the same level they would have as a normal cohort at sixth level, and on.

Hunter of the Outsider (Su): Sylvan Knights gain the ability to distinguish Outsiders non-natural at 10th level. This ability lets them see through any disguise, or physical change. However, a magic dispelling affect, or a magical change that removes the Outsider trait/type disguises the Outsider from the Sylvan Knight just as effectively.

Blood of the Fae (Su): Sylvan Knights gain the Fey sub-type at 15th level, making them immune to magical aging and the detriments of age. Unless they suffer the age bonuses and penalties before gaining this ability, they no longer suffer the penalties associated with aging, but gain the benefits just the same.

A Sylvan Knight who violates their alignment, or Oath one too many times (DM's discretion, but the third allowed destruction of nature tends to be the limit.) loses their divine spellcasting ability, wild shape ability, and their connections to the fae. Sylvan Knights may atone through the Atonement spell.

Religion: Sylvan Knights tend to worship the Gods and Goddesses of the natural world, though some explicitly revere the Fey and nature itself.

Other Classes: Sylvan Knights are often at odds with those who push for industrialization, and other such harmful effects. As such, they do not tend to get along well with classes other than Rogues, Bards, Druids, Wizards, and Sorcerers.

Combat: Sylvan Knights tend to the middle-ground of combat. Sometimes they enter combat, and sometimes they remain back, assisting with druidic spells and healing.

Advancement: Sylvan Knights don't have much room for advancement, but may further themselves through the Druid class.

Sylvan Knights in the World[edit]

Sylvan Knights are more often than not wanderers, or stoic protectors of a particular piece of land where fey live. As such, it is somewhat rare to have them join adventuring groups, but not so rare as to be impossible. A Sylvan Knight would work well amongst a group of Fey adventurers.

Daily Life: Sylvan Knights tend towards their own personal beliefs, their chosen profession does not define who they are as a person.

Organizations: Sylvan Knights do not tend to gather in groups, and as such are seen as a primarily solitary group of people.

NPC Reactions: Most NPCs see them as slightly different versions of Druids, though those who seek to industrialize and extend men's reach find Sylvan Knights a large, and painful thorn in their side.

Characters with ranks in Knowledge (Nature) can research Sylvan Knights to learn more about them. When a character makes a skill check, read or paraphrase the following, including information from lower DCs.

Sylvan Knights in the Game[edit]

Sylvan Knights are a less restrictive version of the Druid with some minor editing to give them some prowess between the choice of melee combat, and spell-casting ability.

Adaptation: Sylvan Knights adapt as easily as Fey do in most campaigns.