While many who dabble in the arcane become adept at beckoning monsters from the farthest reaches of the planes, none are more skilled at it than the summoner. This practitioner of the arcane arts forms a close bond with one particular outsider, known as an eidolon, who gains power as the summoner becomes more proficient at his summoning. Over time, the two become linked, eventually even sharing a shard of the same soul. But this power comes with a price: the summoner's spells and abilities are limited due to his time spent enhancing the power and exploring the nature of his eidolon.

Summoners spend much of their time exploring the arcane arts alongside their eidolon. While their power comes from within, they rely heavily on their eidolon companions in dangerous situations. While a summoner and his eidolon function as individuals, their true power lies in what they can accomplish together. 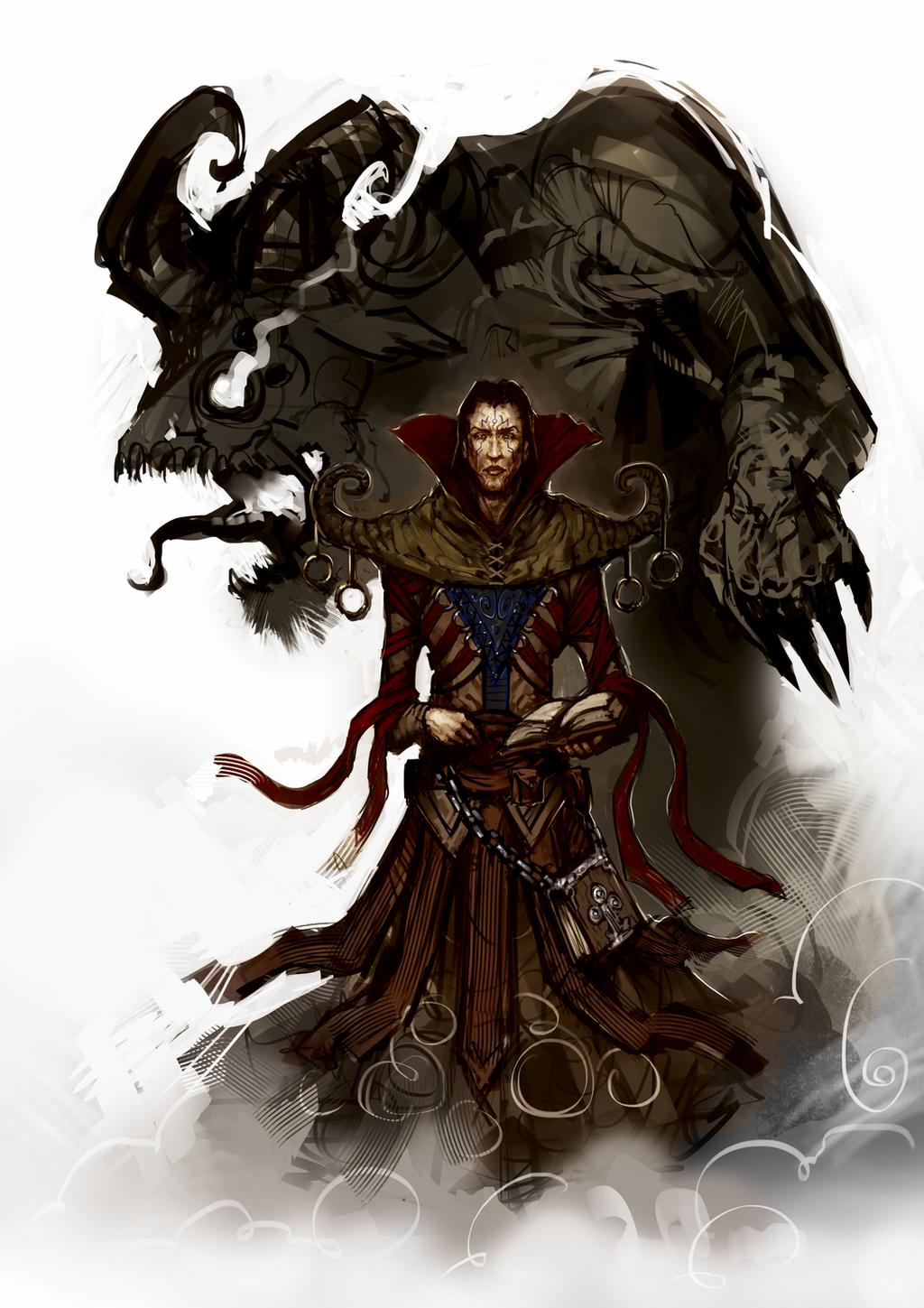 A summoner and his eidolon.

As you make your character, spend some time thinking about what your eidolon looks like. What is the link between you and it? What is your eidolon's personality? Does it prioritize protecting you over protecting your party members?

You can make your character quickly by following these suggestions.

As a Summoner you gain the following class features.

At 1st level, you are linked to a powerful outsider called "eidolon". You can summon it through a ritual that takes 1 minute to perform, or as an action using a 1st level spell slot or higher to summon it instantly. You can communicate with it telepathically (without using any action), as long as you are on the same plane. Your eidolon acts on its own initiative but must obey any verbal or telepathic commands that you issue to it. Any spell effects that can be affected by self-harming actions will also be affected when the eidolon harms its summoner. It cannot wear armor or wield weapons unless it has the appropriate evolutions.

The eidolon's physical appearance is up to the summoner, but it always appears as some sort of fantastical creature and must respect its evolutions (legs, tails, tentacles, etc.) The appearance of the eidolon can be changed each time you can change its evolutions. The eidolon also bears a glowing rune that is identical to a rune that appears on the summoner's forehead as long as the eidolon is summoned (you may also choose to always keep the rune, even if your eidolon isn't summoned). While this rune can be hidden through mundane means, it cannot be concealed through magic that changes appearance (such as polymorph).

Your eidolon's starting ability scores are dependent on rolling or point-buy system, but it gets a -2 debuff to all of it. It has a base armor class of 8 + its dexterity modifier. The eidolon starts with 6 + its constitution modifier hit points. Each time you gain a summoner level, it gains hit points equal to 1d6 + its constitution modifier. Your eidolon also has a number of hit dice (d6) equal to your summoner level, which it can use when it does a short rest (or when you do one, if it's not summoned).

Your eidolon has a base speed of 25 feet. It has the same alignment, languages, and proficiency bonus as you, and you chose one saving throw and one skill that it become proficient with. While creating your eidolon you must chose one creature type from the following options : aberration, celestial, dragon, elemental, fey, fiend, plant, undead, or monstrosity. You are able to change your eidolon type, saving throws and skills, each time you can change its evolutions.

At 1st level, you chose 1 of the 5 possible base forms for your eidolon, which determines its starting evolutions. Once you've made your choice, you can't exchange these evolutions for different ones, but you can remove them.

You have learned to master the school of conjuration, but you can also cast spells from the other school of magic. You can see all spells you are able to learn from the summoner spell list, available at the bottom of this page.

At 3rd level, you know one cantrips of your choice from the summoner spell list. The "Cantrips Known" column of the summoner table shows how many you know at each level.

The "Spell Slots per Spell Level" column of the summoner table shows how many you have at each level. To cast a spell you know, you must expend a slot of the spell's level or higher. You regain all expended spell slots when you finish a long rest.

Charisma is your spellcasting ability for your summoner spells since the power of your magic relies on your ability to project your will into the world.

You can cast any summoner spell you know as a ritual if that spell has the ritual tag.

You can use an arcane focus or a component pouch as a spellcasting focus for your summoner spells.

Starting at 2nd level, you have 1 evolution point that you can spend to improve your eidolon stats and grant it new features and powers. The "Evolution Points" column of the summoner table shows how many you have at each level. You can change evolution points you already spent each time you level up and each evolution can only be selected once, unless otherwise stated.

Starting at 5th level, you can enter a trance to start sharing your senses with your eidolon as an action. While in trance, you perceive through all the senses of your eidolon. You also lose your own sight and hearing, but you still feel all other sensations. The trance is interrupted if your eidolon is unconscious, more than 1 mile away from you, or on a different plane than yours. Whenever you take damage while in trance, you must make a constitution saving throw to maintain it (DC=half damage taken). You can also end it manually at any time (no action required).

Starting at 7th level, your eidolon learns to do multi-attacks. The first time it uses the attack action on its turn, it can attack with 2 natural weapons at the same time. It can use this feature a number of time equal to your charisma modifier and you regain expended uses when you finish a short. Both these numbers increase by 1 when you reach 11th, 15th, and 18th level.

At 20th level, you and your eidolon share a true connection. While within 100 feet of your eidolon and on the same plane, you gain the following benefits :

As a conjurer, you have forged an incredibly strong connection with your eidolon.

At 3rd level, your eidolon gains a +6 bonus to hit points and each time you gain a summoner level, it gets an additional +2 hit points.

At 6th level, you get +1 evolution point to increase your eidolon's power even more. You also get another one for every 3 summoner levels you get. (9th level, 12th level, etc.)

At 14th level, your eidolon gains a +1 bonus to armor class, attack rolls, and all damage rolls.

As an arcanist, you have learned to syergize your magic with your eidolon's power.

At 3rd level, you can regain some of your magical energy while resting. Once per day when you finish a short rest, you can choose expended spell slots to recover. The spell slots can have a combined level that is equal to or less than half your summoner level (rounded down).

At 6th level, when afflicted by a spell and your eidolon is within 50 feet of you, you can choose to have it affected by that spell as well. If you stop being affected by this spell, the eidolon also stops being affected. You cannot share multiple spells at the same time using this feature.

At 14th level, when you cast a spell (excluding cantrips) targeting someone within melee range of your eidolon, it can use its reaction to attack him with one of its natural attack.

As an eidolist, you master mounted combat on your eidolon.

At 3rd level, you get the mounted combatant feat and can now ride your eidolon. When summoned, it now has a saddle on his back that takes the appearance of your choice. When you gain this feature, your eidolon can no longer have the wings evolution and lose it if it already has it.

At 6th level, you gain proficiency with light armor.

At 14th level, you have to choose whether you prefer to master offensive or defensive manoeuvres. You must chose one of the follwing buffs :

To qualify for multiclassing into the summoner class, you must meet these prerequisites: 13 charisma.

When you multiclass into the summoner class, you gain the following proficiencies: simple weapons, simple ranged weapons, intimidation, and nature.