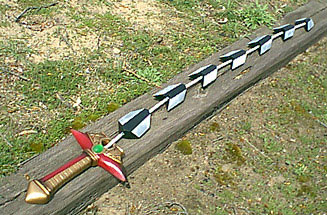 The snake sword is both sword and whip.

The Snake-Sword appears as a normal longsword with odd chevron grooves up its blade, and functions perfectly fine as one, as a martial weapon. However as a move action one can toggle it into its second form, the blade falling apart into a segmented, bladed whip.

As a whip it has extended reach (15 ft. for medium characters, +5 increase or decrease per size), and all the abilities of a whip except it only deals lethal damage and is not inhibited by the limitations of piercing +1 armor or +3 natural armor. In addition, unlike most other weapons with reach, you can use it against foes anywhere within your reach (including adjacent foes).

Using it as a whip does not provoke an attack of opportunity, just as if you had used a standard weapon.

You can make trip attacks with as a whip. If you are tripped during your own trip attempt, you can drop the Snake-Sword to avoid being tripped.

When using it as a whip, you get a +2 bonus on opposed attack rolls made to disarm an opponent (including the roll to keep from being disarmed if the attack fails).

You can use Weapon Finesse to apply your Dexterity modifier instead of your Strength modifier to attack rolls with a whip sized for you, even though it isn’t a light weapon for you. Proficiency in whips counts as the appropriate exotic weapon proficiency in the whip form of the Snake-Sword.

Snake-Swords require complex materials and care. On a natural 1, the cables and gears get stuck, and it is unable to switch forms until reset with a DC 15 Craft Weaponsmithing check, as a standard action.