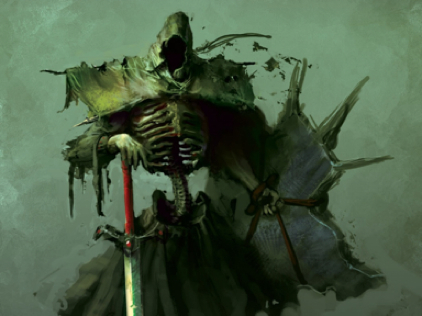 A shrouded skullguard outfitted with sword and shield.

At first sight, the skullguard may appear to be nothing more than skeletons in armor, but they wield a tactical intelligence that would make the strictest generals proud and horrified. Born from the corpses of august soldiers and appraised commanders, they retain all their tactical experience and knowledge from when they were still alive, but mostly lack any other kind of intelligence and thus are the ultimate soldier. They wear black armor adorned with the a skull insignia that represents their order. Those who underestimate their power are the first to die.

Skullguard is a acquired template that can be applied to about any humanoid or monstrous humanoid skeleton that could wield manufactured weapons and armor while alive (provided that the flesh stripped from its skeleton upon creation) and here after referred as the base creature.

The creation of a skullguard requires a powerful necromancer with at least the skulls of those who were experienced in warfare while alive such as soldiers, mercenaries, assassins and the sort. The necromancer must animate the skull along with the rest of the skeleton (be it a composite of from many different corpses if needed) and then cast the spell awaken undead or another spell that brings intelligence to such undead. Awaken the skeleton will be capable of arming itself with any weapon it could use alive. From there the necromancer must train the skeleton himself in specific martial formations, maneuvers or tactics in which it did not already know or acquire the assistance of some one else to train the skeleton instead (such as an Undead Lieutenant.) Once the skeleton is trained, it is given the armor of the skullguard and recruited into the necromancer's ranks.

The training of a Skullguard will take between a month to a year depending on the type of training.

Hit dice are changed to d12's, but the creature retains the hit points it already had.

Add +1 natural armor to the base creature, this stacks with all other forms of armor.

The base creature retains all special attacks.

The base creature retains all special qualities it had and gains the following.

Bone Replacement (EX): A Skullguard can replace any bone in its body that is severely damaged or destroyed with the exception of the skull with the same type of bone from another corpse of the same size and kind. Replacing bones heals 1d4 damage to the skullguard and is considered a full round action to per source in which the replacement bones are taken from.

A Skullguards gains a number of ranks with in the class skills of the base creatures class equal to the number of months of training devoted to its creation.

A Skullguard retains all feats of the base creature and gains Combat Expertise if trained for more then six months as a bonus feat, even if he or she doesn't meet the prequisites.

Any, usually the same as the base creature.

Equal to the base creature +2.

Same as base creature.