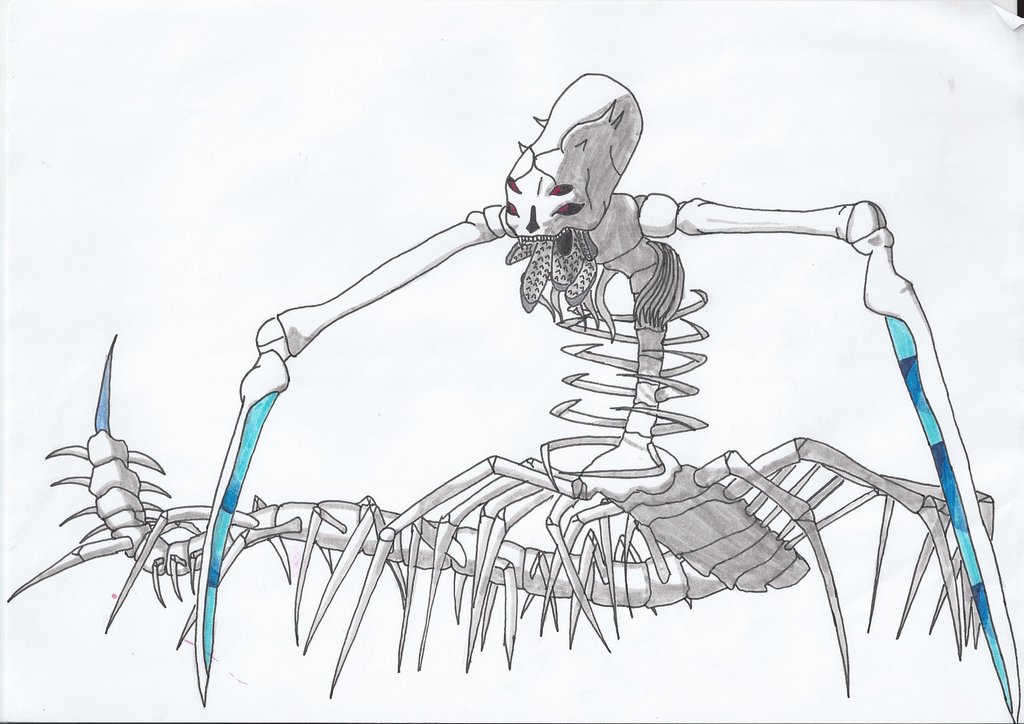 You finally find the room the screams were coming from only to find dead bodies scattered around the floor, some beheaded. The room is large and empty, and as you investigate it you hear quiet "clicking" sounds. You only realize you are not alone as a gargantuan creature descends upon you from the ceiling, and your ally's decapitated head flies towards you..

Skull Reapers are undead guardians of immense size and strength. The lower half of it's body appears like a centipede, as numerous legs made of rib bones sprout from it's long spine. It's torso is made up of different bones, and it's two arms extend like some sort of preying mantis, but it's scythes are much, much stronger. The head is long and alien, with a large mouth made up of three separate jaw bones, two split in half, and it's empty sockets glow with red, nearly unnoticeable light. It makes quiet clicking sounds as it moves. Whether this is intentional or because of it's manufactured joints is unknown. Only the most powerful of necromancers dare to create this beast. It's menacing appearance causes weaker prey to flee, but the Skull Reaper's true power is in it's dozens of legs, which propel it forward at incredible speeds. It often uses it's magical ability to cling to ceilings and other structures to lie in wait for naive explorers, and then descends upon them from above.

Skull Reapers are unintelligent, but extremely clever. They know how to hide despite their size, and will often plunge from a ceiling or cliff to attack enemies, or jump out of a pool of water to surprise their prey. Some have been known to lay still in the open to appear as a pile of bones before striking foes.

Death Attack: Ex: Skull Reapers have a death attack similar to an Assassin's, except that they can only use it to kill, and they may use it an infinite number of times a day (Fort DC 32 or die). Creatures killed by a Skull Reaper's Death Attack are beheaded if they have heads.

Unhampered Climb: Su: Skull Reapers have the supernatural ability to cling to any vertical or horizontal surface with no penalty. While they cannot climb on ceilings, they will jump towards it and then cling to it upside down to await their prey.

Lie in Wait: Su: A Skull Reaper's ability to attack unknowing foes is why it is so dangerous. If a Skull Reaper can get off a successful Death Attack it can easily take out a party member quickly. Skull Reapers that stay completely still for 1 hour gain a +35 to Hide and Bluff. Allowing it to appear as a pile of bones or dead bodies, or even lie in the shadows of a room undetected until a naive adventurer comes too close.