Isn't it strange how something as soft and beautiful as a flower can become a symbol of fear? This is the way of the Shade Maiden. Leave no trace, save for death, and soon people will begin to fear things they have never feared before. -Attina, Elder Shade Maiden


A man on the run wanders through a bustling market place. He's far from home, far from the treachery he committed against his lord. No one will ever find him here, it'd take months of travel just to reach this city, let alone find him among the countless citizens. He decides to relax for a moment, spend some of his ill-gotten coin. A young woman approaches him, selling beautiful and exotic flowers he had never seen before. He isn't one for delicate ornaments like flowers, but these catch his interest.

She offers him a bright violet flower. He sniffs it, and its sweet aroma fills his nostrils. He thanks her and moves on, thinking nothing of the encounter. As time passes, however, he becomes filled with a sense of dread. He remembers stories told to him in his youth, of men with a price on their head turning up dead with nary a wound on their body, and the purple flower, lying innocently on their cold bodies. Superstitious people blame these deaths on Shade Maidens. But they can't be real, can they? They were a boogeyman, a legend, a story told to keep people from stepping out of line.

When night set, he fears returning to the small cottage he purchased to hide in, for fear that he was being pursued. He wanders the city, turning left and right through its winding streets until even he himself doesn't know where he is, and finds himself at a cheap inn. He buys a room, paying in coin and giving the innkeep a false name, and tries to rest. Once in his room, he feels his dread intensify, screaming at him, warning him that he's being watched.

Shaking, he draws a shortsword and faces the door of his room, awaiting an assailant. He waits an hour, then two, then three. No one comes through. As he turns around, finally ready to give in and rest, he sees the flower girl in his room once again. She's holding a small dagger, no more than a few inches long. Not enough to kill a man in a head on fight.

"Who are you?" he yells, but is met with no response. The woman's face changes, as her magical disguise melts away, revealing the grey skin of a dark elf. She approaches him, each step she takes seemingly moving her three times the distance they should.

It is only once she is close enough to strike that she replies, simple and to the point;

"The contract is complete."

Shade Maidens are specially trained assassins, stemming from a tradition originating from the Underdark. They are female dark elves, with some exceptions. They operate meticulously, and with great secrecy. The source of their power is the ability to enchant magical flowers that wilt in the sunlight, but thrive in the Underdark. These enchantments range from the power to mark someone for death, to the power of mind control. They receive contracts given to them by male operatives known as Dread Brothers, who accept targets and payment on behalf of the Shade Maidens. Shade Maidens are stoic, stealthy, and unconcerned with the morals and politics of the surface world, loyal only to their Underdark house and to other Shade Maidens.

The training to become a Shade Maiden is brutal, involving simulations of torture and interrogation, extreme food and sleep deprivation, and isolation in dangerous wilderness. This cruel method of teaching is meant to harden them against the dangers of the surface world, and keep them from ever revealing the secrets of the Shade Maidens to anyone who might capture them. Once their training is complete, they must undertake one last, dangerous task, and that is the ingestion of a potion containing the petals of an enchanted red flower. This potion is a poison, especially deadly to men, and the risk in its consumption is a show of loyalty. 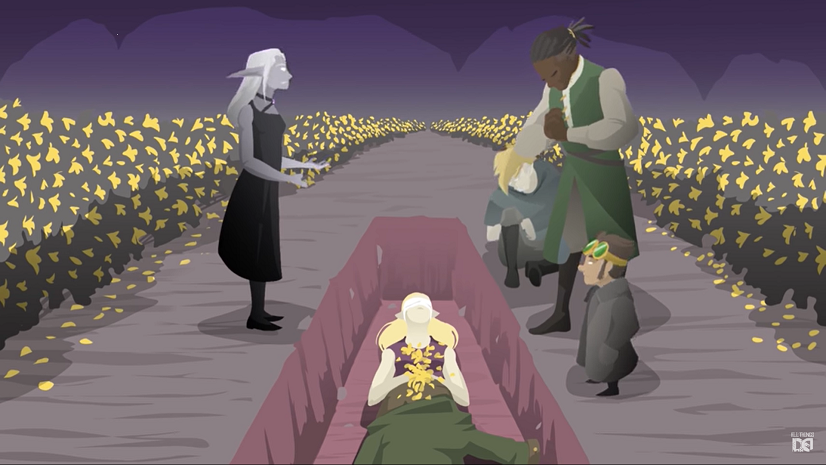 Shade Maiden buried among the flowers, Art by All Things DnD

When creating a Shade Maiden, take into consideration your relationship with the order of assassins that you came from. Are you still actively involved with them? Have you betrayed them, and abandoned your order to set out on your own? Did you steal the potion that empowers Shade Maidens and secretly gain their powers for yourself?

You can make a Shade Maiden quickly by following these suggestions. First, Dexterity should be your highest ability score followed by Wisdom then Constitution. Second, choose the Assassin background. Third, choose the leather armor, a dagger for the simple weapon, and a rapier for the finesse weapon, and the burglar's pack.

All Shade Maiden abilities listed as "floral enchantment" require the expenditure of materials. Each ability corresponds to a different flower. These flowers are not ordinary flowers, but a special family of magical flowers originating in the underdark. A Shade Maiden must cultivate and protect her inventory of enchantable flowers and potions made from said flowers.

As a Shade Maiden you gain the following class features.

Beginning 1st level, you have the ability to enchant purple Underdark flowers, and create potions from them as an action. You must expend one purple Underdark flower and one first-level spell slot to enchant a flower. You may also expend one purple flower and two first level spell slots (one one second level spell slot) to preserve the enchantment in a potion. As a bonus action, target a single creature within a five-foot radius, if a creature smells the flower or ingests the potion, they must pass a constitution save based on your spellcasting DC, or receive the Mark of Death.

Once marked for death, a faint purple aura visible only to shade maidens surrounds the target, and if they are successfully hit by a weapon enchanted by the Enchant Dagger ability, add the appropriate damage dice to the base damage. The bonus damage is counted as magical damage. The mark of death remains for 24 hours at 1st level, 7 days at 5th level, 30 days at 13th level, one year at 17th level, and indefinitely at 20th level. The mark lasts until either it expires, the target is killed, or the curse is removed by Pink Floral Enchantment (Cure Mark). The Mark of Death may also be removed by a Wish spell. The mark of death only works on creatures who are medium or smaller, and does not affect undead or celestial creatures. The Mark of Death has no effect on other Shade Maidens.

Starting at 1st level, up to three times per day, as a bonus action you may enchant a dagger or a small improvised weapon capable of piercing or slashing damage for up to one minute. If you successfully attack someone with the mark of death using an enchanted weapon, add 4D8 necrotic or psychic damage to your attack, in addition to your base damage dice. This bonus damage ONLY applies to creatures currently afflicted by the Mark of Death.

As you level up, the damage done by attacking people marked for death with an enchanted dagger will increase. The duration of the Mark of Death will also increase.

Beginning at 1st level, you gain the ability to sense creatures afflicted by the {{inpage|Purple Floral Enchantment (Mark of Death). When in your line of sight, they are surrounded by a faint aura. You can sense anyone with the mark of death who is within 300 feet, but not discern their exact location.

This ability may be used once per day times the number of Shade Maiden levels your character has. As a free action, you may activate Shade Stride and add 10 feet to your movement speed for one turn while in sunlight, or 30 feet while in darkness. While the Shade Stride is active, all attacks of opportunity against you are done at a disadvantage. You may use Shade Stride to clear a gap or chasm that is less than 30 feet in length without using an acrobatics or athletics check.

You know the eldritch blast cantrip and one other cantrip of your choice from the [Trickster Spell List].

You gain access to spells of different level as a multiple of your Shade Maiden level divided by two. For example, at level 2 you have access to first level spells and catrips only, and at level four second level spells become available.

Spell save DC = 8 + your proficiency bonus + your Wisdom modifier

Beginning at 2nd level, you gain the ability to make strangers forget you. Once per day, you may target another character within 5 feet of you. If that character fails a Wisdom save of your spellcasting DC, they will forget any interaction they had with you in the past 24 hours. This ability takes effect 10 minutes after the target fails their wisdom save. If they met you less than a day ago, they will forget you entirely and will have a gap in their memory that can only be reversed by a Wish spell.

Beginning at 7th level, you can attack twice, instead of once, whenever you take the Attack action on your turn.

Beginning at 5th level, you may expend one 1st level spell slot to enchant a pink Underdark flower. A person who smells it's aroma is cured of the Mark of Death.

Starting at 9th level, you may expend one 1st level spell slot to enchant a yellow Underdark flower or two 1st level spell slots to preserve the enchantment as a potion. Target a single creature within a five-foot radius, and any creature who smells the flower or ingests the potion must pass a Wisdom save based on your spell save DC, or be mind controlled for ten minutes. During this time they may not take any actions, other than carry out commands made by the Shade Maiden. In initiative, the commands are issued and carried out on the turn of the character who is under mind control. During the duration of the spell they may channel the Shade Maiden's abilities, including Enchant Dagger, all her spells, and Floral Enchantments. The mind control is broken if the Shade Maiden is attacked and fails a concentration check. The Yellow Floral Enchantment has no effect on other Shade Maidens.

Beginning at 11th level, you may magically extend the effects of floral enchantments outward over a great distance. The range of your floral enchantments increases from five feet to thirty feet. This applies only when the Shade Maiden is using a flower, rather than a potion made from that flower.

Beginning at 15th level, once per day you may extend your Forget Me Now ability to any range of time from 24 hours to 365 days.

At Level 20 no one is safe from your enchantments. Your Mark of Death becomes indefinite and will not expire not matter how long the target has had it, until either they are killed or it is removed manually. Undead, celestials, and creatures size large and greater are affected by the Mark of Death. Any creature will less than 100 HP is instantly killed if you successfully attack them with the Enchanted Dagger ability while they are afflicted by the Mark of Death. They get no death saving throws.

Prerequisites. To qualify for multiclassing into the shade maiden class, you must meet these prerequisites: 13 Wisdom or 14 Dexterity and 13 Intelligence.

Proficiencies. When you multiclass into the Shade Maiden class, you gain the following proficiencies: light armor, simple weapons, and finesse weapons.