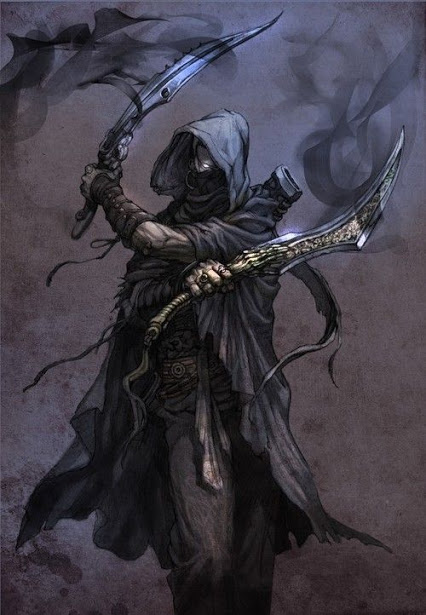 A shade borders the realm of death. Neither alive nor undead, a shade merely exists, calling upon the shadowfell for its existence.

The shade gains a Deflection Bonus to AC equal to the base creature's HD/4 (minimum +1, round down) while in shadows.

The shade, while in shadows, gains a bonus to all attack and damage rolls equal to the base creature's HD/4 (minimum +1, round down).

The Shade, while in shadows, gain's a luck bonus to all saves equal to the base creature's HD/4 (minimum +1, round down).

All existing Extraordinary, Supernatural, and Spell-like abilities remain unchanged. Add the following to the base creature's Spell like abilities:

SRD:Invisibility: 1/day, caster level equal to 1/2 the Base creature's HD (round down).

Add the following to the base creature's special qualities:

No Metabolism(Ex):a shade doesn't have a metabolism and doesn't need to eat, sleep, or breathe, nor does it age. A shade gains all the appropriate immunities one would have for not having a metabolism, such as immunity to fatigue, exhaustion, ingested poisons, death from aging, etc.

Regeneration (Ex): The shade gains regeneration to the base creature's HD/4 (minimum +1, round down). This fast healing only applies when the shade is in a shadowy area.

Shadow Jump(Ex): The shade can travel through the essence of shadow, pulling him through an entirely different dimension to instantaneously arrive at its destination. While in a shadowy area, the shade may teleport, with nothing more than a thought, to another shadowy area it sees within 120 plus 10 feet per the base creature's HD of its current location. The Shade must have line of sight to the destination to use this ability, and it is activated as a move action. This can be used once per day per four HD of the base creature (Minimum 1, round down)

Shadow Stride(Ex):At 16th level, the Shade is able to teleport once per day without error, or plane shift to the Plane of Shadow

Flight(Ex):A shade can fly at its base land speed (newly adjusted one if in shadows) with perfect maneuverability. The shade loses this ability out of shadowy conditions, if this would cause the shade to fall, reduce the damage to 1d6 max.

Spell Resistance(Ex):Shades are resilient to magic, so receive a spell resistance equal to 11 plus base creature's HD

Cold Resistance(Ex):A shade has a Cold Resist of 5 plus the base creature's HD (max 20)

Light Sensitivity(Ex):The shade, a being melded of the essence of shadow, does not react well to being placed in light. It takes a -2 penalty to its Strength, Constitution, Dexterity while in lighting conditions brighter than shadowy. Also, The shade has a vision range limited to 120 ft under these lighting conditions. The shade cannot see anything past 120 ft while in bright light, and instead of seeing the sky or horizon, as one normally would, the shade sees nothing but black beyond this vision border. However, if a shade is capable of casting Wish (or Miracle), it can wish for this ability to be removed. This wish costs the shade experience pints sufficient to lower its HD by two and put its experience total at the minimum for its current level. For example, a 17th level shade casts the wish to remove this flaw, and it loses Exp sufficient enough to place its total at the minimum required for 15th level. A shade must do this for himself, he cannot cast wish out of a scroll or other item, nor can it have another creature cast wish for it. A shade may still make other wishes, but for most shades, their primary goal in their pursuit of power is to remove this burden from themselves.

Light and Fire Aversion(Ex):Shades are not able to cast spells with the 'fire' or 'light' descriptors, this can still be avoided by effects such as Energy_Substitution. Spells that allow you to choose the energy created can still be cast (such as SRD:Energy_Ball), but fire and light options are prohibited still.

The shade gains +8 to hide and move silently while in shadows. Also in a shadowy area, a Shade benefits from the Evasion feat.

By HD or Character Class

As a variant, level loss can replace the light sensitivity as the limiter of the shade's power. Shades created without Light Sensitivity do so at +8 LA.