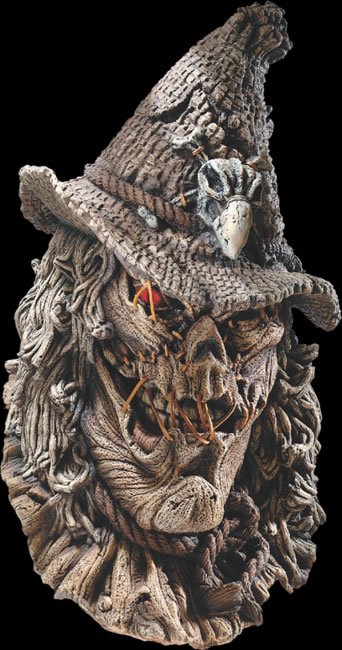 One of the many forms a Scarecrow can be given by its creator.

Scarecrows are magically animated constructs created by Wizards and other masters of secret lore to guard important places or treasure. Scarecrows possess just enough awareness to follow orders. Single-minded, they ignore all but the most obvious dangers.

A scarecrow is often found in an outdoor setting, while at rest it is indistinguishable from a standard non-animated scarecrow, and many times will be commanded to lie in wait until potential threats are near enough to suffer its full attacks. Scarecrows will often start off using it's Cowering Gaze on potential spell-casters, and then use its Cowering Claws on those that engage it in melee combat. If others continue to attack it with ranged weapons it will attempt to use its Cowering Gaze on them to keep the attacker from causing harm. Anyone who wields or uses fire on a scarecrow will find the monster's full attention drawn to it, as the scarecrow tries to disable them from using the fire against them.

A character knows the following information with a successful Arcana or Nature check.

DC 20: A scarecrow is given "life" by an animating spark from the Elemental Chaos. This spark is not a soul or an independent creature, but the raw vitality that gives the scarecrow the power of movement and a glimmer of sentience.
DC 25: A scarecrow's creator has complete control over its actions. Without its creator present, a scarecrow tries to obey its last orders to the best of its ability.

Scarecrows can be encountered with a wide variety of other beings they have been commanded to serve, or work with.