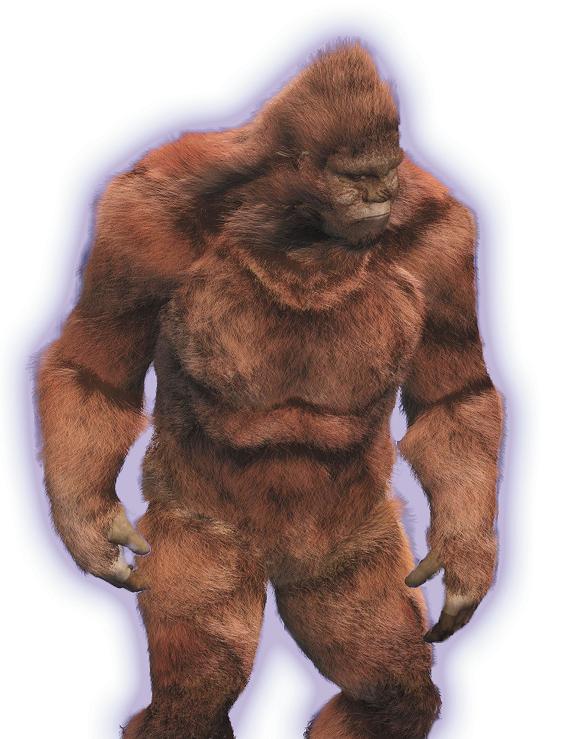 The sasquatch is a large ape-like creature that stands between 6–9 feet tall, and weighing between 350-500 pounds. It is normally covered in dark brown or deep black hair. Although fur coloration between them will change given their habitat. Although those that dwell in swamps will have dark reddish hair (often called skunk-apes). Regardless of the habitat they all share the same statistics. They have large eyes, a pronounced brow ridge, and a large, low-set forehead; the top of the head is rounded and crested, similar to the sagittal crest of the male gorilla. Sasquatch have a strong, unpleasant smell that can nauseate the strongest stomachs. They have huge oversized feet that leave enormous footprints which have earned them the nickname bigfoot. They are mainly nocturnal and omnivorous.

These hulking brutes are the leaders of the family clans they live in. Only 2 or 3 Stompers tend to live in one group. Their rage and violence is often the driving force in a Sasquatch family.

The Sasquatch Tosser tends to watch prey from a distance, hurling stones in order to drive off intruders or to weaken them so others in the group can close for the kill.

Sasquatch Wailers are known for the horrid mournful cry they loose as they enter battle. Those who hear the sound say it reminds them of a baby crying for its mother, or the sound of a wounded animal.

Sasquatch will hurl themselves mindlessly into combat, smashing and stomping enemies until they flee or die.

DC 20: Although normally peaceful, sasquatch are highly territorial and protective of their families. If they feel threatened, or find intruders within their habitats, they will attack to protect themselves and their families. Sasquatch dislike most other hominids, and make their homes far away from them. Still many generations tend to remain in the same areas, and if other humanoids move into those places they soon find themselves in conflict with them. Sasquatch many times will observe intruders for a while until they determine it is a good time to attack and drive them off. Often people will find evidence of these observations in the form of huge footprints and tufts of stray hair. While sasquatch are not highly intelligent they are adept at remaining hidden. They will make their homes in secreted caves or woodland nests, that they can easily conceal when needed. Also they will eat their own dead, and then bury what remains deep beneath the ground in order to hide their presence.

Sasquatch live in small family groups of up to half a dozen members. Sometimes they will be captured (or Dominated) and kept as wild guardians in certain natural locations.