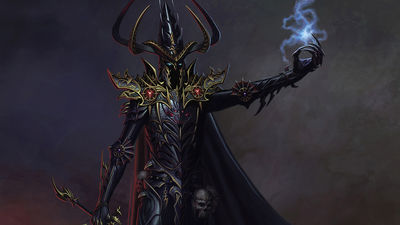 "An elder evil from the void. He stands about 15 ft in the air, covered in His dark, ornate armor. He appears humanoid, but few know if he truly is. Dark silvery eyes pierce through his helmet and send a freezing chill through even the most malicious of hearts."

Long ago, mad wizards seeking infernal power created what is now known as a Saraneth Gate. This Gate allowed the wizards to peer into the Void, the place between the Planes. What they did not expect was for something to come through. Rotund'jere broke through the Gate into this material world. Surrounded by such petty beings as mortals, He conducted a great war against all life. He was curious about the powers of mortals and allowed a select few to fight for him. The Great War ravaged on for years, powerful magic was used to create new creatures of His own design which added to the calamity of the war.

The Planes began to fear Rotund'jere, especially the Upper Planes. They decided to work with the mortals and provide a decisive strike against Rotund'jere. The first attack of the Upper Planes was a complete catastrophe. Rotund'jere not only slaughtered 4 Celestial Paragons, but managed to climb into the Upper Plane and injure Sol in his own domain. It is unknown how Rotund'jere was defeated, perhaps his arrogance. But He was caught off guard in his fortress of Hightower and was severely injured by the remaining Celestials and armies of mortals. Rotund'jere's own army was fighting the mortals when He was cornered by the advancing Celestials and elite mortals of Dark Element, in His last moments He turned on His own armies and started to decimate everything he could see. He swore the end of all life on this Plane and the Upper Plane. He was defeated and entombed a deep within a mountain in the Northern Waste.

It should also be noted that it is very taboo to speak His name aloud. He is only to be referred to as The God-slayer or His Dark Presence. It is believe by many, that every time his name is spoken, the ice around his tomb cracks ever so slightly.

Rotund'jere prefers to use spells over any other combat. He will only use his claws for deliberate and malicious attacks on weak creatures.

Staff of Hightower (Ex): A dark artifact crafted by His Dark Presence. When activated, the staff sends out a Death Pulse. A bright red wave of energy is emitted out in a circle around the staff with extreme force. Any living creatures within 50 ft of the Death Pulse must make a DC Fort 40 or have all their flesh ripped from them and become an Angel of Decay in 1d4 rounds and follow the ability of Create spawn.

Divine Scourge (Su): Once per day as a swift action, the God-slayer can cause all divine spellcasters and extraplanar outsiders within a 1,000-mile radius to become sickened for 1d4 hours. An affected creature must succeed on a DC 53 Fortitude save or take 66 points of vile damage.

Nondetection (Su): The God-slayer is immune to all divine divination spell effects.

Create Spawn (Su): A living creature of size Huge or smaller slain by His Dark Presence becomes an angel of decay in 1d4 rounds. Spawn are under His command remain enslaved until its death. They do not possess any of the abilities they had in life.

Lord of the Dead (Su): The God-slayer can command almost any undead creature within 200 feet of it as a free action. Undead of up to 40 HD are automatically commanded, whereas undead with 41 or more HD are allowed a DC 72 Will save to resist being commanded. Undead creatures with class levels get a +20 circumstance bonus on this save.

Heartstopper Aura (Su): All living creatures within 50 ft. feel their hearts struggle to continue beating. Those effected gain five negative levels for as long as they remain in the area unless they have some protection against negative energy effects. Living creatures that have 10 or fewer Hit Dice are slain and rise as Lyrynths in 1d4 rounds.

Regeneration (Ex): Weapons that are both good and epic deal normal damage to Rotund'jere, as do spells with the good descriptor, and effects that channel positive energy, like certain alternate usages of undead turning.