In those darkest moments, as the light dims from your eyes, you realize it's not the world fading out, but the Reaper fading in.

For whatever reason, Death chose you to be one of their many loyal servants. You speak to them rarely, but you always know when they call for you. After all, dying once before has already made you a part of their domain. 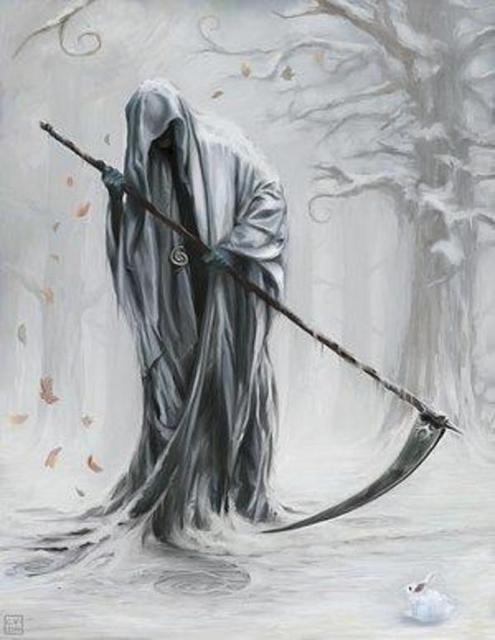 A reaper in a white cloak while holding their scythe.

Death doesn't choose just anyone to work for them. What did you do to garner their attention? Any alignment will do -- did you slaughter a village? Or did you die to save one?

You can make a Reaper quickly by following these suggestions. First, Charisma should be your highest ability score, followed by Dexterity. Second, choose a background that matches what you would have been before you died and became a Reaper. Third, put proficiency in Intimidation and Perception.

As a Reaper you gain the following class features.

Beginning at 1st Level, you gain the most recognizable tool of a Reaper: the Death Scythe. Taking the form of a martial melee weapon of your choice (most often a Scythe, which deals 1d8 slashing damage, with the versatile(1d10) and reach properties, though not always). This weapon appears spectral, shedding dim light in a 5 foot radius, has the finesse property (or if the weapon you chose was Heavy, it no longer has that property) and can be summoned during a one-hour ritual, which can be preformed during a Short Rest. You are proficient with this weapon, which deals an additional amount of necrotic damage equal to your Reaper level on a hit. It can be dropped or set down, but cannot be lost or permanently destroyed for any reason. Should it go more than 30 feet from your person, it will appear back in your hands unless taken to another plane. If it manages to be destroyed, it will reappear in your hands after a Long Rest. Once you create your weapon through this trait, you can make it disappear or reappear as a bonus action, or you can take a short rest to change the type of weapon. Damage from this weapon counts as magical (if in the area of antimagic--such as the antimagic field spell, it functions as a regular weapon of its type) gains the additional following properties at the following later levels:

Starting at 5th Level: Your Death Scythe now can make two attacks instead of one when you take the attack action.

Starting at 10th Level: Your Death Scythe now has a critical range of 19-20.

Your clothes may have been considered many things: emo, unfashionable, and uncomfortable under strong heat. But that all stops now. Beginning at 1st level, an ethereal robe of Death has been bestowed upon you. It materializes as a fine black hooded cloak draped around your person with flowing sleeves and coattails. Your AC becomes equal to [10 + Dexterity modifier + Charisma modifier]. It can be taken off, but cannot be lost or permanently destroyed for any reason. Should it go more than 30 feet from your person, it will appear back around your shoulders; if it manages to be destroyed, it will reappear around your shoulders after a Long Rest. These qualities are permanent. Your garb gains the additional following properties at the following later levels:

Starting at 5th Level: Your cloak grants Superior Darkvision out to 120 ft. Additionally, you have advantage on all intimidation rolls against any creature that can see your face.

Starting at 10th Level: Your cloak becomes a misty, black, almost entirely incorporeal robe that falls around your shoulders and drapes to your feet. This shroud grants you the following benefits:

• You can evoke the mists within the shroud to cast Speak with Dead without requiring material components or expending spell slots. You can use this feature a number of times equal to your Charisma modifier (minimum 1) per long rest.

You are sworn and beholden to Death. Thus, you shall obey his threefold commandments:

• Do not attack first. If you must attack second, ensure your foe cannot attack third. Reapers attack only in self-defense. They are not assassins. But if you must strike a foe, do so to destroy them utterly. Ensure they do not live to regret crossing you.

• The balance of Life and Death is to be maintained at all costs. Reapers largely dislike any magic that affects the ebb and flow of these two forces, especially those that turn the tide in Life's favor. Thus, they dislike healing magic, though they understand it as a necessity. But the line is drawn at reanimation. As the saying goes, 'The dead are dead. There is no changing that.' Reapers view magic that reanimates and resurrects those Death has claimed as his own to be foul, heresy of the highest order. There is nothing they will not do to put these abominations down, and have an even lower opinion of those who would cast such spells.

• You are dead, and the Dead do not love. While not (technically) dead, Reapers are the children of Death. And the dead have no use for earthly attachments, often owning only what is absolutely necessary and associating with others only when they must. This is by far the most flexible of the commandments, as exceptions have been made in the past, but worldly attachments are still strongly discouraged. A Reaper can have friends, but loving a mortal is strictly forbidden.

If you stray too far from the commandments, each long rest you will gain 1 point of exhaustion that cannot be removed until you seek repentance from Death itself. If Death accepts you as a faithful reaper again, your points of exhaustion may be removed all at once or slowly (once per long rest), at the DM discretion.

At 2nd level your connection to life and death allows you to heal or injure living and dead creatures. You gain the ability to cast the following spells using your Reaper Points as shown below.

At 3rd level, you are starting to exhibit tenancies similar to that of Death itself. You can spend 2 Reaper Points as a bonus action to temporarily become incorporeal, and can pass through solid objects until the end of your turn. You cannot end your turn inside of a solid object, and if you do, you take 1d6 force damage and are ejected out of it near the closest opening. Additionally, you still take normal damage from any attacks while in this form. You can also see into the Ethereal Plane, and at 20th level, you can enter or leave the Ethereal Plane as an action, allowing travel through the Ethereal Plane.

Upon reaching 3rd level, Death grants you the ability to locate life. Reapers may use their inner sight to find a creature on the same plane of existence. You can close your eyes and spend 1 minute concentrating to see all living creatures within 30 ft of you as faint spectres. This feature lasts for 1 minute can be used a number of times equal to your Charisma modifier. You regain all expended uses after a long rest. You gain the additional benefits at the following levels.

Beginning at 11th level: The distance is increased to 90 ft. Additionally, you gain the ability to castlocate life (the locate creature spell, except the range is 1 mile, and it only affects living creatures, so it cannot find constructs or undead) once per day, without expending a spell slot. You regain the ability to do so after completing a long rest.

Beginning at 17th level: The distance is increased to 120 ft. Additionally, you can cast locate life twice per day, rather than once. You also gain Truesight out to 60ft.

Death is hard to kill. Beginning at 5th level, when you drop down to 0 hit points, you can instead choose to drop down to 1 hit point. You may use this feature once per long rest. Additionally, you gain proficiency in Death Saving Throws and no longer age.

At the 7th level, you've become used to death. You are now resistant to necrotic damage.

A Reaper is undeterred by conditions of the flesh. Beginning at 9th level, you gain immunity to poison damage and the poisoned condition. You also cannot be affected by any disease.

Death has a grand and spacious house, and you can summon the part which you have leased your soul to. Beginning at 14th level, You can spend 10 Reaper Points to cast the 7th level spell Mordenkainen's Magnificent Mansion, and it takes the form of Death's domicile.

And upon the Pale Horse rode Death. At 15th level, you gain the ability to cast Find Greater Steed once a day without any material components or spell slots. You will always receive the same pale horse which uses the statistics of a Nightmare. The Steed has a True Neutral Alignment.

Beginning at 18th level, you cannot be surprised and no attack roll has advantage against you while you aren’t incapacitated. Whenever an attack is attempted by a creature, you hear what seems to be a deep-toned church bell.

Dead men tell no tales, and you know why. At 20th level you become one of Death's closest Reapers, and have acquired the ability to transform into the Avatar of the Grim Reaper for 1 minute. While transformed, you gain the following benefits:

• You grow to a height of 10ft while your face is replaced by a haunting white skull veiled in shadow, with piercing green beads for eyes.

• Your scythe grows in size to suit your new form and all damage dealt by the scythe (including it's necrotic damage) is doubled for the duration of the transformation.

• You gain resistance to bludgeoning, piercing and slashing damage.

• Whenever you reduce a creature to 0 hit points during this transformation, you regain 5 Reaper Points.

You can only access this form once per long rest.

Prerequisites. To qualify for multiclassing into the Grim Reaper class, you must meet these prerequisites: Dexterity 13, Charisma 15