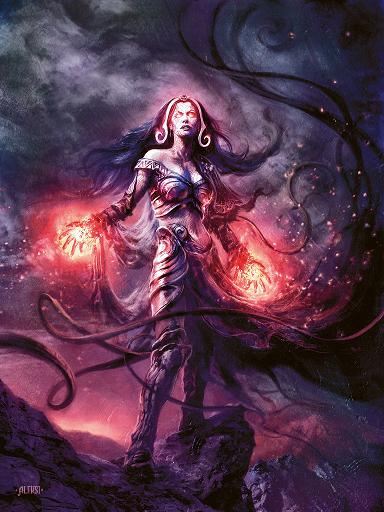 Planeswalkers are the source of an infinite energy, called the Planeswalker's Spark. This Spark allows them to absorb the mana of a plane, and use it as though it were a tool or weapon. Planeswalkers are able to traverse the planes freely, and without restriction; this is called Planeswalking

Adventures: New Planeswalkers adventure for any number of reasons; some to gain the wit and quick thinking of a deceptive advisor, some to gain the power to rule an entire plane, and some just for the fun of it. Being Immortal, Planeswalkers have a long time to hone their abilities, and strive to learn something from every experience.

Characteristics: Planeswalkers are, in essence, walking magical forces, making them masters of wielding a power greater than them. They can use these powers to manipulate the very plane around them, and often use this to their advantage. Although no more than their race, they have an infinite amount of time to master any skill. Most Planeswalkers prefer to use their mana from a distance, but there is the occasional one who likes showing the true power of mana up close and personal.

Alignment: Planeswalkers are free spirits by nature, and unbound by any rule or law. Good Planeswalkers generally do their best to help people, or even a plane. Their methods can be anywhere from Godliness to the most irrational of them. Evil Planeswalkers use their limitless power to try and obtain more, often in the sense of domination or control. Being what they are, they can hide their alignment very well. A Planeswalker whose spark ignites in the midst of an adventure may not be Chaotic, and retain their alignment. However, this new sense of ‘freedom’ often leads to a change in thinking.

Background: Planeswalkers are engulfed in their new found profession without their knowledge, and most definitely without them asking for it. A Planeswalkers spark will ignite when it seems darkest, and this is usually when the Planeswalker is about to die. They are usually shifted to someplace safe, which is more than often on a different plane. Most join adventuring parties to become skilled enough to return home, but often find themselves attached to their adventuring party in some manner, so they usually stay until the end. Planeswalkers treat one another just as one god would to another. They respect each other, acknowledge their existence, and mostly leave one another alone.

Races: Although Planeswalkers are often portrayed as being human, not all Planeswalkers are. Although humans are more adept at each plane, become attuned to a mana color faster, and master their skills quicker, they are often the most flawed, their downfalls often being greed or pride. Planeswalkers can be any race under the sun; they retain all special abilities granted by their race and extend their language to the extra planar languages. Few non-humanoids have been planeswalkers, or they simply are recognized as such. Certain races do align with certain colors of mana easier than others.

Planeswalkers are not your average combatant. They can battle on the front lines, or even from behind safety. All of the following are class features of the Planeswalker.

Royalty Points: Royalty points are, in essence, the amount of mana you have collected for the day. You have a Points limit per day, your starting limit is 8, and every even level after, you add d6 + Wis modifier, and every odd level you get d8 + Wis modifier. You can only use up to your level + 1 points at a time for any attack or enchantment.

Immunity: Planeswalkers retain any immunity they had from their home plane, indefinitely. (Example, a Planeswalker who comes from a plane covered in deserts is comfortable in hot weather, similar with an arctic plane but with cold.)

Uncontrollable: Until the Planeswalker is level 12, they don’t have full control over the use of their mana. This unpredictability is similar to that of a Wild Mage’s Wild Magic, except it is using mana points instead of spells per day.

Favored Mana Color: At 2nd level, a Planeswalker chooses one of 5 mana colors to be their favored mana color. You gain Bonus’s when you use/have your favored color of mana. (See Table below)

Planeswalker Fail Safe: At 5th level, if damage would reduce a Planeswalker to -10 Hit Points for the first time per day, instead he is reduced to -9 and is planeshifted 2d8 + Wis modifier spaces in a safe direction. Loose half current Royalty Points.

Unlocked Potential: At 8th level, and every 4th level afterwards, a Planeswalker has reached a turning point in their experiences. Double maximum Royalty Counters after added d6 + Wisdom modifier. Royalty Counter spending limit is now your level + 2 (level + 3 at 12, level + 4 at 16, and level + 5 at 20.)

Loved Mana Color: At 10th level, a Planeswalker chooses one of his favored mana colors to become his Loved Mana Color, and gains additional Bonus’s when using/having that color of mana.

Master of Mana: At 12th level, a Planeswalker looses Wild Magic. Any Mana Color that is not his Hated or Loved color is considered favored. After increasing your Royalty Point Cap, divide this number by 5, representing the 5 mana colors. From your hated mana cap, reduce it by half, add half of that to your loved mana color, and redistribute the remaining points to any pool of your choice. (Example: Total of 500 Royalty Points, 100 Blue, 100 Green, 50 Black, 125 White, and 125 Red)

Master of Planes: At 12th level, a Planeswalker may planeshift as a free action. He also understands, speaks, reads, and writes all languages.

Ultimate Spell: At 15th level, a Planeswalker can now tap the true potential of any mana color, allowing him to use its ultimate spell. (See Table below)

Timeless Body: At 18th level, a Planeswalker no long ages as regular mortals do as their body is infused with the magic that flows within them. (as Timeless Body )

Religion: Planeswalkers hold no religion or god above themselves. Most out of arrogance, and some out of an equal respect for each one; if they worship one, they are most often of their native plane, and most definitely one that is not known in the plane they travel.

Other Classes: Although Planeswalkers are usually arrogant, they respect each other party member equally, knowing all too well the importance each class will make in combat. It is often this knowledge of their necessity that aides them in accepting others more readily.

Role: Planeswalkers are generally either witty enough, or tough enough, to handle most encounters on their own. This takes experience however. Most prefer to stay in the middle or back, supporting the group in anyway they can. They usually enchant the weapons, armor, and even persons of the party. If the right color, they can even heal, hide, or enlarge their companions. Although many would prefer to take it solo, they often are forced into groups, but prefer it because it can, in essence, extend their control.

Advancement: Most Planeswalkers see perfection as the only thing. Given their immortality they have forever to hone their skills. Most eventually train in the ways of a Wizard for their spells(which they can cast any number of times per day by using Mana.) Some however see physical perfection as something required, and therefore become Fighters or Monks (Exempt Alignment Restrictions).

Planeswalkers are more than often in the midst of a different profession when their spark ignites. A new Planeswalker without any form of defending himself is most vulnerable unless they have a group to help protect them. Once they are powerful enough they break from their adventuring party and often travel on their own.

Daily Life: A Planeswalker spends his sleepless days wandering the planes to accomplish some greater cause. Like Jace, he may decide to act in part of an organization greater than himself. Others pursue personal goals, like obtaining more power or finding a foe worthy of their power.

Jace Beleren: Curiosity has always gotten the better of Jace Beleren. As a magical prodigy, he delved into lessons of sorcery deeper than the other students in mage academies, and succeeded to the point that even his instructors were suspicious of him. As a specialist in mind magic, he uses his abilities to gaze into the minds of others, discovering even closely guarded secrets. This practice has lead him into danger more than once. In fact, his mind magic has helped him discover the existence of planeswalkers and of worlds beyond his own, opening his eyes to an even greater scope of secrets.

Liliana Vess: Beautiful, cunning, and ambitious to a fault, Liliana Vess is quietly one of the Multiverse's most magnetic dangers. Liliana's dark charisma is undeniable—she's agelessly striking and sharp as the edge of a razor. Liliana Vess's most formative experience was her pact with demonic forces. As Liliana faced the limits of her human lifespan, her health and power were waning. She contacted powerful demon lords, and one dark deal later, she was restored to her height of power and beauty. Today she appears to be in her 20s, but in truth she's over a century old.

Organizations: If Planeswalkers ever come together for much of anything, it is usually something greater than all of them threatening the Planes and the Multiverse alike.

NPC Reactions: Since Planeswalkers can hide what they are, their reception is based on race and attire.

Characters with ranks in Knowledge(Planes) can research Planeswalkers to learn more about them. When a character makes a skill check, read or paraphrase the following, including information from lower DCs.

Planeswalkers in the Game[edit]

Planeswalkers as NPC can act as antagonists, or can even Planeswalk a party to a different plane for many different reasons. As a PC, their main objective is to master their powers and find out more about what they are. They are capable of just about anything, given that they can multi-class out the ass...

Adaptation: Planeswalkers can fit into any campaign as long as the DM is willing to accept a completely new aspect of gameplay. They can be powerful spell casters or skillful warriors. Choose a subclass , to gain partial level bonuses that are relevant in flavor to your color choice, such as spells per day for blue, or red, rogue skills or life drain for black, or combat or druidic skills for green for example

Sample Encounter: Jace Beleren comes to the party to either retrieve an item for the Consorteum, or ask for their help in doing similar. Jace is a master of mind and illusion spells, so if they initiate combat they will have to face clones and illusions far more powerful than they imagined. It is possible for Jace to erase their memories, the DC to resist is 40.