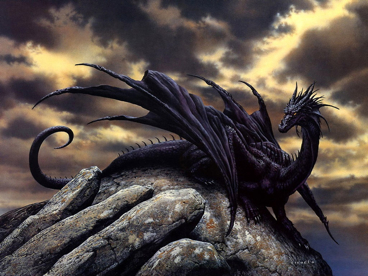 A phantom dragon caught in a rare sunlit moment.

In the fog you feel eyes upon you as if you're being watched. A shadow here, a wind there, then nothing. Perhaps it was your imagination... wait, do you hear breathing behind you?

The Phantom Dragon is often confused with the ghosts of other dragons. However, they are of real flesh and blood. They are inherently from the material plane, but often are found shifted onto the ethereal plane. They are chaotic creatures, curious of others yet paranoid and easy to alarm. They creep on others, hiding in banks of mists to observe others, subtly influencing them through tricks and distractions if need be.

Good-aligned Phantom Dragons usually play harmless pranks, or help others avoid danger by quietly guiding their path within the mist. Evil-aligned Phantom Dragons use the mists to sow discord and confusion. Most, however, simply wish to be quiet, curious observers of the events of others, and all of them like to filch away unguarded or dropped treasures for their lairs. This usually begins rumors of a place being haunted or cursed.

A phantom wyrmling’s scales are dark gray with a clear shiny coating that is very reflective. As the dragon approaches adulthood, its color deepens slowly to a darker, haunting pitch, though it retains a thin clear coat over it's colored scales. Very old dragons develop a smoky dark blue tint to the edges of their scales. Able to burrow, they have large claws and small, plated scales. The pupils of its eyes fade as a dragon ages, until in the oldest the eyes resemble glowing pale green orbs.

Most phantom dragons shun battle, escaping if found out. The best fight is a battle where the opponent does not know where it is, or even what it is. It employs fear tactics with it's Improved Ghostly Appearance and it's fear aura to drive off opponents. If corners, or facing opponents capable of pursuing it into the ethereal, it uses it's breath weapon, a line of force. Only when guarding their lairs do phantom dragons become vicious, and stand their ground.

Breath Weapon (Su): Phantom dragons has one type of breath weapon, a line of force energy.

Ghostly Appearance (Su): As a free action a phantom dragon may cause it's appearance to shimmer and take on the appearance of a frightening, ghostly form of itself. This is an illusion, with a caster level equal to the HD of the dragon, and blurs its form enough to provide concealment as noted for its age. In this form any fear effects it uses, including it's frightful presence, have their DCs increased by 1, and +1 circumstance bonus to intimidate per age category. Its appearance may fool others into thinking it is a ghost. If visible a Will save with a DC equal to 10 + 1/2 HD + Cha to reveal it to still be material, but does not negate the concealment.

Ethereal Sense (Ex): Similar to their distant cousins, the Ethereal Dragons (Draconomicon), they can 'see' into the ethereal plane. However, their senses are less refined, and can only sense ethereal creatures while on the material plane as if by blindsense, out to 60 ft. On the ethereal plane they can see out to the range of their darkvision.

Improved Ghostly Appearance (Su): A juvenile's ghostly appearance improves. Its Ghostly Appearance now can disguise its form as the ghost of something else. Those who see the dragon's Ghostly Appearance instead see an illusion (phantasm) of one of their own kind, in suitable frighteningly ghostly fashion, unless they succeed on a Will save against the DC 10 + 1/2 HD + Cha to recognize it as a dragon. The phantom dragon may choose to reveal its true form if it desires.

Regardless of appearance, the save DC for fear effects rises by 2. This supersedes the +1 bonus of Ghostly Appearance.

For the rare times it is visible, a phantom dragon flying overhead is marked by its distinctive profile. It's wing membranes are mottled, nearly transparent at some points and a dusky matte black at others, giving it a tattered appearance that seems almost impossible to fly with. The leading edges of the wings are fringed or scalloped near the tips, and exceptionally long alar thumbs, like the black dragon. The trailing edge of the wing membrane joins the body ahead of the back legs.

On hatching a phantom dragon's wings are entirely transparent. Over a course of a week it's own unique pattern of dark and clear blotches forms. Each pattern is unique for each dragon, like a fingerprint.