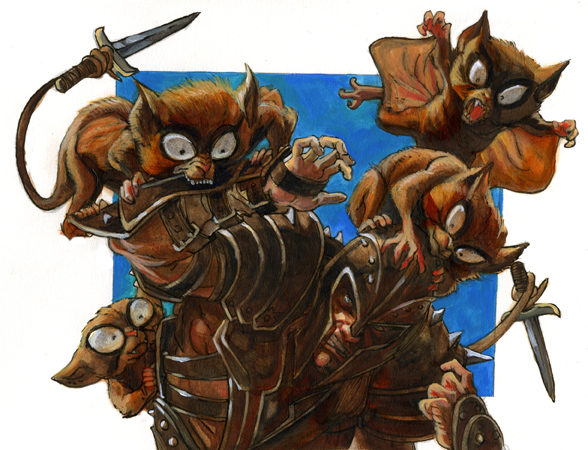 Phanatons defending their territory against an adventurer.

The phanaton look like a cross between raccoons and monkeys. They are roughly halfling-size and have 4-foot long tails that can grasp objects. They are even able to manipulate these tails clumsily. For example, when fighting in the trees, a phanaton often wraps its tail around a branch for support. In addition, phanaton have membranes of skin stretching from arm to leg. They can spread these membranes and glide from branch to branch. Phanaton speak their own language, as well as Common and Fey.

Phanaton prefer to eat fruits and vegetables, though they may eat meat. They are especially fond of the taste of spiders, and often hunt them for food. They are the traditional enemy of the aranea and other spider-kin, and attack them on sight.

Glide (Ex): Phanatons can glide, usually from branch to branch, due to the loose skin between their arms and legs. The horizontal distance a phanaton can glide is equal to three times the result of a Jump check. If starting from a high place, as from a tall tree, add the starting height to the phanaton's height when calculating distance. While gliding, a phanaton must spread his arms and legs to catch the air; he cannot fight, cast spells requiring somatic components, or do anything requiring two hands. They have a maneuverability of Clumsy and are incapable of gaining altitude. Phanatons take no damage from falls of any height, provided they can use their gliding ability and have enough room to land safely.

Favoured Enemy (Spiderkin)(Ex): All phanaton are considered to be expert spider killers, with spiders and spider-type monsters as their automatic favoured enemy like the ranger class ability. When in combat with these monsters, the phanaton gains all applicable bonuses, fighting as a Ranger of a level equal to its Hit Dice.

Opposable Tails (Ex): Phanatons can grasp objects and can use their tails to wield light weapons as if they were an off-hand, with a -4 penalty. However, the phanaton can take the Multiattack feat to remove this penalty.