This variant of the keeps a lot from the other Nymph class on this site, however, this variant was to more greatly embrace the Nymphs grace and ability to charm other races. The variance comes in the Nymph Traits.

Nymphs are nature’s embodiment of physical beauty, and they guard the sacred places of the wild. They are so unbearably lovely that even a glimpse can completely enamor an onlooker. Most nymphs hate evil and any who would despoil the wilds for any reason. A nymph’s demeanour is wild and mercurial. Like nature, she embodies both great beauty and fearsome danger. She can be kind and graceful to mortals who revere the wild places of the world but is also quick to strike against mortals who take more than they need or who treat nature thoughtlessly. Most nymphs are bound to a glade, or pool of some kind, however, there are a few that wander the Feywilds and the prime material unbound. 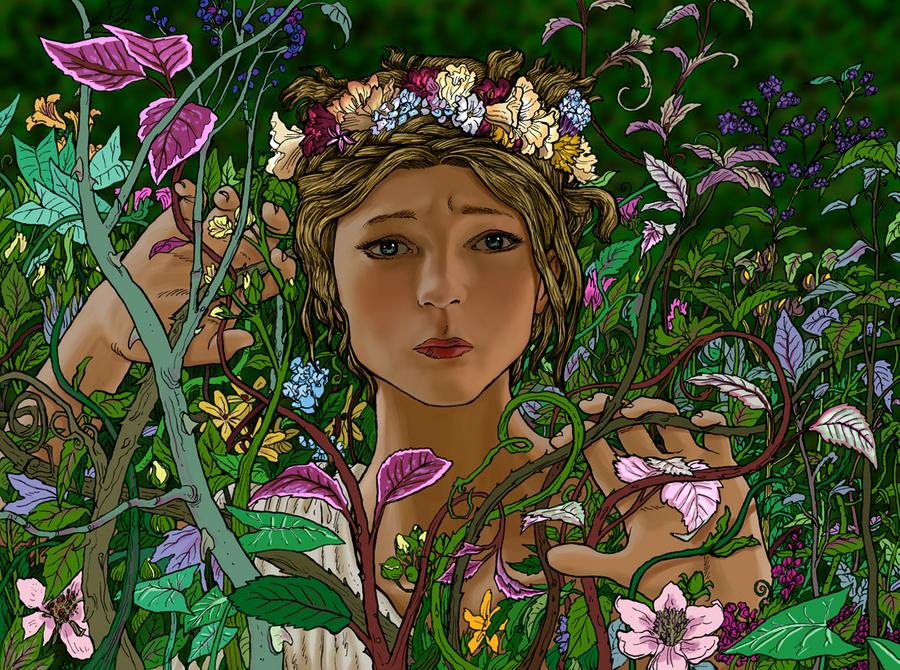 The personality of a nymph is also a reflection of nature. Nymphs are mercurial creatures who may act with kindness, but are also quick to strike against those who tread on nature by acting greedily or thoughtlessly. As caretakers of the woods, they favor deep forests and often shun the other races. However, due to their playfulness, curiosity and carefree nature, the strongly individual nymph can be found all over supporting a wide variety of different causes.

Nymphs, unless they choose to do so, do not reproduce, but are rather generated by the beauty of the natural world. The beauty of a nymph is so difficult for the mind to comprehend that the brain of an onlooker often simply stops processing visual stimuli to avoid sensory overload. Nymphs are not merely reflections of their environment but are intimately intertwined with it. If the home of a nymph is burned, used as a dumping ground, or otherwise despoiled, the nymph may fade away or become twisted. Similarly, if a nymph is injured, the beauty of the surroundings is likewise diminished, and if a nymph is killed, the area will become twisted and wither.

Although the nymph may embody a forest or some larger aspect of nature, a nymph's home is a particularly secluded and pristine area, such as a grove, a pool, or a hilltop. Nymphs will defend this area against all intrusion. Nymphs will often use non-lethal force at first unless given reason to believe the intruders have ill-intent or if they reply with deadly attacks of their own.

Friends of nature, such as druids or rangers, may be given an opportunity to explain their presence, and if there is a good reason, maybe offered aid.

Nymphs have several names. Their first name is in the fashion of the nearby civilization. Their secret name is in Sylvan and usually has to do with nature (river, wind, deer, jaguar, willow, spring, etc). Many Nymphs choose to have a "last name" to reflect their personality (such as a Nymph of the Tree named Tyrande Whisperwind).

This variant of the keeps a lot from the other Nymph class on this site, however, this variant was to more greatly embrace the Nymphs grace and ability to charm other races.
Ability Score Increase. Your Charisma score increases by 2, and your Dexterity score increases by 1.
Age. Nymphs age at the same rate as elves, reaching physical maturity by age 20. Once they reach adulthood, they do not physically age further and cannot die of old age, however, most will usually choose to 'return to nature' at around 700 years of age.
Alignment. Nymphs tend towards chaos and goodness, but can be of any alignment.
Size. Nymphs are slightly shorter and lighter than elves. Your size is Medium.
Speed. Your base walking speed is 30 feet. You also have a swim speed of 30 feet.
Nymph's Charm. You know the friends cantrip. When you reach 3rd level you can cast the charm person spell once with this trait and you regain the ability to do so when you finish a long rest. When you reach 5th level you can cast the suggestion or enthrall spells once with this trait and you regain the ability to do so when you finish a long rest. Charisma is your spellcasting ability for these spells. If the target is not attracted to females, or is a child, the spell fails.
Darkvision. Accustomed to twilit forests and the night sky, you have superior vision in the dark and dim light. You can see 60 feet in dim light as if it were bright light, and darkness as if it were dim light. You can't discern colour in darkness, only shades of gray.
Fey Ancestry. Your creature type is considered to be both fey and humanoid. Additioinally, you have advantage on saving throws against being charmed, and magic can't put you to sleep.
Earthly Grace. Your grace allows you weave around attacks with grace. When you aren't wearing armor, your AC is 12 + your Charisma modifier. A shield's benefits apply as normal while you use your natural armor.
Languages. You can speak, read, and write Common, Elvish, and Sylvan.