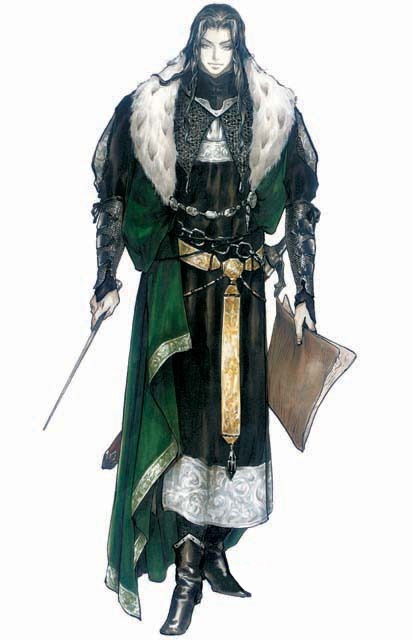 (Mathias Cronqvist, from Castlevania Lament of Innocence, this is not mine, it is Konami's character, and depiction. It's purely for aesthetics!)

A Noble Warrior encompasses a suave, charismatic character who doesn't slack for combat either.

Abilities: Charisma, and Strength are the most important abilities to a Noble Warrior, while Dexterity and Intelligence are often second-hand abilities they can rely on.

Races: Any race with an established hierarchy, nobility, or royalty may have a successful group of Noble Warriors. Mostly Humans tend to become Noble Warriors, however.

Nobles are typically either charismatic, or feared. As such, they are often gifted, and charismatic individuals who are capable of higher learning due to a more extensive amount of gold or influence. All of the following are class features of the Noble Warrior.

Weapon and Armor Proficiency: Noble Warriors gain Simple, Martial, and two Exotic Weapons of their choice in proficiencies. Noble Warriors have no proficiency in armor, or shields, and use of either interferes with their abilities and movement.

Nobility's Mantle: The Noble Warrior adds his/her Charisma bonus (if any) to his/her AC. In addition, a Noble Warrior gains a +1 bonus to AC at 5th level. This bonus increases by 1 for every five Noble Warrior levels thereafter (+2 at 10th, +3 at 15th, and +4 at 20th level).

Noble Aura: Heirloom Sword (Su): Noble Warriors gain an Aura spell at 1st, 4th, 8th, 12th, 16th, and 20th levels. They may activate an aura as a standard action, and it lasts until they are knocked unconscious, or they enter an area where magic is rendered ineffective. Auras do not work in Nullify Magic zones, and only may be function as one at a time, activating another aura cancels your previous one. Auras apply to the Noble Warrior emanating them as well. Noble Aura: Heirloom sword gives a +2 bonus to Attack rolls to all allies within 20 feet of the Noble Warrior. This bonus is raised by +1 at 10th, 15th, and 20th level each.

Empathy / Demoralize (Ex): Noble Warriors gain the Empathy (If Good-aligned), or Demoralize (If Evil-aligned) powers as if a Psion of his/her Noble Warrior level. These abilities can only be used once per day, and require a full-night's rest to be regained. These powers do not give the Noble Warrior the Psion Sub-type, as they are powers recreated through their own intelligence and charisma. You can not augment these spells, the Save DC is 10 + CHA modifier + 1/2 Noble Warrior's level (Minimum of 1, maximum of 15.)

Noble Aura: Coat of Arms (Su): Coat of Arms gives allies within 20 feet a +2 to AC, this bonus to AC does not apply to Touch, or Flat-Footed and functions as a miscellaneous modifier. This bonus increases at 10th, 15th, and 20th levels by +1 each.

Royal Aura: Fire / Cold (Su): A Noble Warrior makes a choice between Fire, or Cold damage at 12th level. When they choose this, they may only use this aura, not the other. Their choice grants them immunity to either Fire, and fire-based damage, or Cold, and cold-based damage for all allies within 20 feet.

Hope Is Not Lost / Despair of the Enemy (Su): Noble Warriors of 14th Level gain the Ressurection spell as a daily use Ability if they are good-aligned, or the Power Word Kill spell if they are evil aligned. These spells function as they would for an appropriate level spell caster. No material components, or costs are exhumed by the Noble Warrior, but they are exhausted for the next 1d6 hours, a full night's rest is required to recharge this ability. This ability -is- subject to a full day's worth of cool-down before you may use it again, whether you commit to a full night's worth of rest or not.

Royal Smite (Ex): Noble Warriors at 20th level who use their Smite ability successfully add their Charisma Modifier in damage a second time.

Ruler's Aura: Magical Barrier (Su): All allies within 20 feet of the Noble Warrior gain a +5 to saves VS. Magical effects.

A Noble Warrior who ceases to be Lawful no longer benefits from the bonuses of the Noble Warrior class, though they still benefit from the weapon proficiencies of the class.

Bonus Feats: The epic Noble gains a bonus feat (selected from the list of epic feats) at levels after 20th.

Religion: Noble Warriors of Good, Neutral, or Evil alignments are typically prone to fond worship of gods who bless their followers with wealth, or good luck.

Other Classes: The Noble Warrior finds itself a target of some ridicule until they prove their worth in battle to Fighters, Paladins, and Clerics. They can typically get along somewhat with Rogues, Rangers, Wizards, and Sorcerers. They rarely, if ever, get along well with Druids, thanks to their differing opinions on the world around them.

Combat: Noble Warriors are melee combatants, though they can take very little punishment before being forced to retreat. As such, they are best at hit and run tactics, and using their charisma, and intelligence to outwit opponents.

Advancement: Noble Warriors can advance easily into most skill-based melee classes. Multi-classing into a spell-caster class gives them the ability to do a more permanent stream of damage to their enemies when they are forced to move back from the threat of their foes.

Noble Warriors in the World[edit]

Noble Warriors are a more charisma-based Rogue, granting the party a face character with whom they can venture without losing too much in the combat area.

Daily Life: Noble Warriors as a group tend to be lush, or dramatic. They have a flair for overdoing things, and indulging far more than is healthy. As such, they spend much of their day absorbed in their own personal pleasures, whether good or evil.

Notables: Anell Raestri, Human Noble Warrior, Queen of the coastal "Queendom" of Cairuoni, a well-known pirate, though she is told to be a fair and just leader.

Organizations: Noble Warriors tend to comprise Royal Courts, and Nobilities all over the worlds they inhabit. As such, they are quite common to gather together.

NPC Reactions: Noble Warriors tend to receive a great berth of respect, and sometimes admiration. As such, most Noble Warriors take special care to invest in Sense Motive as a skill, as most of a population will act the same way towards them, no matter their true thoughts.

Characters with ranks in Knowledge (Nobility and Royalty) can research Noble Warriors to learn more about them. When a character makes a skill check, read or paraphrase the following, including information from lower DCs.

Noble Warriors in the Game[edit]

Noble Warriors are a more charisma-oriented version of a Rogue class, while not giving into Sneak Attacks, or off-hand methods of greed or glory gaining. As such, they make a great face character for any group of players, or an excellent NPC.

Adaptation: Any type of nobility, or royalty can adapt well to the Noble Warrior class.