The dragon figurine, made from marble, stood there, silently watching the bypassers. No one cared about him. Then a tiefling came, picking him up from the ground. "Now, now, what do we have here?" Rieta, the tiefling asked, now inside her home "This should be worth a fortune." Then the figurine jumped out of her hands, enlargening himself. He came to life. "Tulvir." said the dragon "And who are you, my saviour?..." 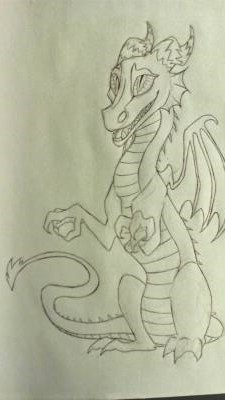 Nacre dragons are small, 3' tall dragons, who inhabit the Astral Plane. They, in some aspects match the Astral dragons(example: their appearance, their diet). Every one of them is linked to his/her own Figurine of Wondrous Power. One's 1' tall figurine closely resembles the actual dragon. The figurine can be activated 4 times a day, for a maximum of 4 hours. Destroying the figurine makes the Nacre Dragon lose its link to the statue, even if repaired, or a new figurine is made. They do not age like normal dragons, nor they gain benefits or penalties from aging. They live for 800-900 years, then go into deep "slumber" for another 800-900 years, to be reborn from their carcass. They do not have memory of their previous life, unless they spend years meditating, then they can recall pictures.

Nacre dragons usually prefer wizardly casts, but there have been sightings of spellthieves amongst them.They prefer to talk out themselves out of combat, or if they have to fight, they mostly use spells. For spells, use the rules and usable spells of the given class

Nacre Dragons should be NPCs, or ultimately semiPCs, because they can be overpowered. Figurines shouldn't be given to PCs in adventures.