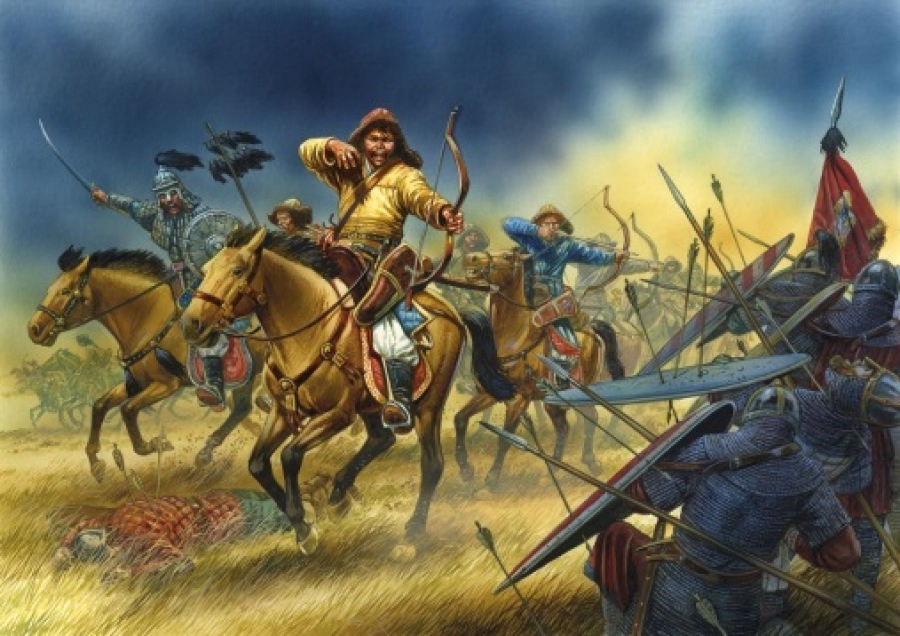 A powerful ranged warrior who holds an unbreakable bond with his or her mount.

The mounted archer excels in combat at a distance, combining skill, speed and accuracy with deadly efficiency. This warrior style originated with the Mongols conquering most of Asia, and is still utilized with deadly force today.

Abilities: Dexterity is vital to the mounted archer, as their prowess with the bow and ability to ride their mount effectively. Wisdom and Strength also benefit many class skills, with Strength allowing her to wield composite bows. Lightly armored, the mounted archer benefits greatly from a high Constitution similar to most classes with low or average hit dice.

Race: Humans, Elves, and Halflings are the most common followers of the mounted archer. Dwarves and races that dislike horses or mounts almost never are mounted archer's.

Archer’s Aptitude: They excel at archery at the expense of combat with other weapons. While wielding any bow, the mounted archer substitutes her Base Attack Bonus (BAB) with her Archery Attack Bonus (AAB). A mounted archer also uses her AAB in lieu of her BAB for the purpose of qualifying for archery feat. Finally her Mounted Archer levels are applied as fighter level for the purpose of accessing feat in the Weapon Focus tree.

Therefore a 2nd level fighter (BAB +2) / 2nd level Mounted Archer (BAB +1, AAB +2) would qualify for either Weapon Specialization (Longbow) and Shot on the Run, assuming she had the prerequisite feat(s).

Battlefield Tactics: At 4th level, a Mounted Archer has advanced knowledge of combat tactics. If she studies the current combat situation for 3 rounds, she and her allies get a +2 to attack rolls for the entire encounter. If she studies the battlefield before a battle, she gets an additional +1 to her attack roll bonus, and automatically notices tactically useful information about the area as if she had made a DC 15 Spot or Search check.

Improved Battlefield Tactics: At 9th level, a Mounted Archer has even more advanced knowledge of combat tactics. If she studies the current combat situation for only 2 rounds, she and her allies get a +3 to attack rolls for the entire encounter. If she studies the battlefield before a battle, she gets an additional +2 to his attack roll bonus, and automatically notices tactically useful information about the area as if she had made a DC 20 Spot or Search check.

Heal Mount: Once plus her Wis mod, a mounted archer of 9th level or higher can use heal mount as a spell-like ability.

Special Archery Ability: [10th/14th/18th level] The archer learns unusual maneuvers with the bow and arrow, such as ricocheting arrows off walls or peppering her enemies with a barrage of arrows. At 10th, 14th, and 18th, she may select one of the following special abilities; unless otherwise noted, each special ability can be selected only once:

Archery: The mounted archer can select an additional feat from the Archery class feature. Archery can be taken multiple times.

Barrage: (Rapid Shot, and Manyshot) This ability can be used once per day as a full round action to lay fire to an area. Barrage effects a designated 60ft cone, allowing the mounted archer to make one attack against each creature within the target area at her highest BAB -2. This ability can be taken multiple times to increase the number of daily uses.

Devastating Strike: When wielding any bow in which she has Weapon Focus or Improved Critical, the damage multiplier for critical hits increases by x1. Also, should any attack you make with a qualifying weapon deal 50 or more damage in a single attack the DC to avoid death by massive damage is increases from 15 to 20.

Eagle Eye: While wielding a bow you are considered to be one range increment closer your target for all attack rolls made outside of your first range increment. In addition aim, point blank shot, sniper attack, sneak attack, and skirmish are now effective out to 60ft.

Hunter’s Shot: (Prerequisite: Survival 12 ranks) The mounted archer can take a shot that ignores natural armor. This special ability may be used a number of time per day equal to three plus the mounted archers Wis mod.

Mighty Draw: ( Str of 15 or higher ) The mounted archer is consider to have +4 Str for the purposes of wielding a composite bow

Pepper Shot: (Prerequisite: Rapid Shot) You can use a full round action to pepper a target within 30ft. When doing so make a single attack roll at a -4. Then roll damage as normal plus an additional 4d8 of piercing damage. A successful attack deals full damage and dazes the target for 1 round. If you miss with this attack and have 10 or better on your D20 roll daze is negated but you still deal have damage. This attack expends 5 arrows. Creatures with evasion are afforded no protection from this attack.

Piercing Strike: When wielding any bow in which she has Weapon Focus or Improved Critical, the net threat range is increased by 1, and is allow to take ten on rolls to confirm crit.

Ranged Flank: On a successful attack made with a bow against a target within 30ft, you may declare a ranged flanking position. You are therefore treated as though you occupied the nearest square adjacent to the target for the purposes of determining whether or you or and allies are flanking the target, so long as you maintain a position that is known to and within 30ft of the target. You may only use this ability once per round, and only against one target at a time.

Ricochet Shot: As a standard action the mounted archer can attempt to strike a target within 30 feet with a Ricochet Shot, allowing her to ricochet her arrow off a nearby surface so that the arrow strikes from an angel that negates cover (even total cover) and shield bonus. This ability can be used at any time provide there is a hard surface nearby (ex. Stonewall) and a conceivable flight path. This attack uses the archers highest base attack bonus –2.

Volley: As a full round action an archer with this special ability can make an attack against a target who is within line of site but at least four range increment out with a -4 penalty to his attack. This negates all other ranged penalties.

Bow Aptitude: Any weapon specific feat applied to a certain type of bow can be changed to another type of bow after an hour of practice.

Improved Greatbow Proficiency: The mounted archer can now use composite greatbows while mounted but not regular greatbows.

Mastered Battlefield Tactics: Starting at 15th level, a Mounted Archer has masterful knowledge of combat tactics. If she studies the current combat situation for only 1 round, she and her allies get a +4 to attack rolls for the entire encounter. If she studies the battlefield before a battle, she gets an additional +3 to her attack roll bonus, and automatically notices tactically useful information about the area as if she had made a DC 25 Spot or Search check.

A mounted archer's mount is treated as a magical beast, not an animal, for the purpose of all effects that depend on its type (though it retains an animal’s HD, base attack bonus, saves, skill points, and feats).

Mounted Archer's Mount Basics: Use the base statistics for a creature of the mount’s kind, but make changes to take into account the attributes and characteristics summarized on the table and described below.

Bonus HD: Extra eight-sided (d8) Hit Dice, each of which gains a Consitution modifier, as normal. Extra Hit Dice improve the mount’s base attack and base save bonuses. A special mount’s base attack bonus is equal to that of a cleric of a level equal to the mount’s HD. A mount has good Fortitude and Reflex saves (treat it as a character whose level equals the animal’s HD). The mount gains additional skill points or feats for bonus HD as normal for advancing a monster’s Hit Dice.

Natural Armor Adj.: The number on the table is an improvement to the mount’s existing natural armor bonus.

Str Adj.: Add this figure to the mount’s Strength score.

Note that even intelligent mounts see the world differently from humans, so misunderstandings are always possible.

Because of this empathic link, the mounted archer has the same connection to an item or place that her mount does, just as with a master and his familiar (see Familiars).

Share Saving Throws: For each of its saving throws, the mount uses its own base save bonus or the mounted archer’s, whichever is higher. The mount applies its own ability modifiers to saves, and it doesn’t share any other bonuses on saves that the master might have.

Upgraded Mount: The mounted archer's steed strengthens and reflects the inner soul of its master. Unicorn - (good aligned only) mounted archers will see their mount acquire a unicorn horn and some spell like abilities. The Unicorn will have a 40 ft good aura around it that acts as a continuous prayer spell. It will also be able to cast cure moderate wounds 3/day. Pegasus - the mount will sprout wings and obtain a fly speed of 100 ft (good). Hippocampus - the mount will acquire aquatic traits including being able to breathe underwater and a swim speed of 60ft. Nightmare - (evil aligned only) the mount turns black and it's eyes become flames. It acquires the Smoke ability. The smoke doesn't obscure the nightmare or the mounted archer's vision.

Greater Teleportation: The mount can act as if its cast teleport, greater once per day.