A woman with a muscular physique burst through the front line, wielding a great sword as if it were a knife.

An obese man blocks the path in a narrow street, his body a wall to all who wish to harm his allies.

Massers are individuals who have, for whatever reason, gained larger than average bodies. Massers use their above average sized bodies to assist them in combat, be it protecting others or dealing damage. This class is heavily combat focused, but allows for unique role-play opportunities as a literally larger than life individual. 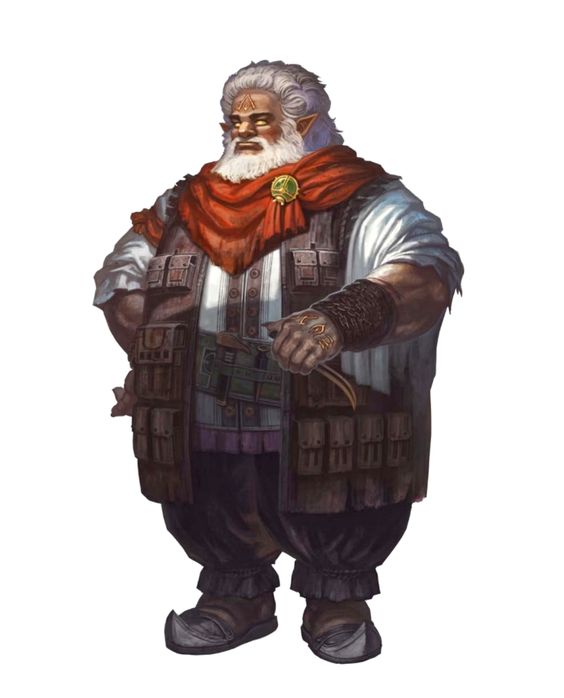 Think about why your character packed on the pounds to over come obstacles. Was your character raised by giants and aims to emulate them? Is your character a horrible glutton that found being an immovable object to be advantageous. Whatever the reason, you're big and often an "mass"ive obstacle to those who oppose you.

You can make a Masser quickly by following these suggestions. First, Constitution should be your highest ability score, followed by Strength. Second, choose any background that fits your character's story.

As a Masser you gain the following class features.

Be it due to your Hard Muscles or Layers of Fat, your body is naturally protected. Starting at 1st Level, you have an Unarmored Defense = to 10 + Your Constitution Mod + Your Dex Mod. Due to your massive size, you are incapable of wearing armor. However, you may use shields.

At 1st level, you chose a Body Type. Choose between A Muscular Body Type or A Fatty Body Type, both detailed at the end of the class description. Your choice grants you features at 1st Level and again at Level 3, Level 7, Level 11

At 2nd level, you may choose to stance your size in order to occupy the space that a Large Sized Creature would. While doing so, you occupy a 10x10 space rather than a 5x5 space. Your size classification is still medium, you simply occupy the space of a large creature. You may do this without the cost of an action. However, the space you choose to occupy must be empty before doing so.

Starting at 5th Level, you may attack twice upon taking the attack action.

Starting at 6th level, you may use your size to scare others. Gain Proficiency in Intimidation, or double your proficiency bonus if already proficient. As an action, you may direct your attention to a target within 30 ft. This target must make a Wisdom Saving Throw against a DC equal to 8 + Proficiency Bonus + Strength Modifier. On a failure, the target has the Frightened condition.

Starting at 9th level, you gain confidence after you come to realize that your an intimidating force to others. You and allies within 10 ft of you gain immunity to the frightened condition.

Starting at 10th level, you can move around to cause the ground to crack and break. As an action you, step heavily to destroy the ground that you move across. All terrain that you traverse becomes difficult terrain to everyone but you. This ability may work in conjunction with Max Occupancy.

Starting at Level 13, you weight becomes a weapon itself. As an action you may make an attack roll using your body as a weapon. Use your proficiency bonus + Strength or Constitution modifier to hit. On a hit, you deal damage = to you masser level + either your constitution or strength modifier. The target is then knocked prone. You may only use this ability once per short or long rest

Starting at Level 14, your size is comparable to that of a large creature. Whenever you take an action to grapple a target, you may grapple up to Huge sized creatures. Creatures medium sized and smaller have disadvantage on Acrobatic (Dex) and Athletics (Str) checks against the grapple, and you no longer have disadvantage on Athletics (Str) checks to grapple larger creatures. As a bonus action, you may choose to impress your weight onto medium and smaller sized targets which you grappled. Dealing your Strength or Constitution Modifier's worth of damage unto the target.

Starting at Level 17, you have become truly massive. You may now choose to stance yourself occupy the space of a huge creature without the use of an action. If creatures occupy the space you wish to occupy, you may use a bonus action to use your size to push them out of the area. This ability functions in conjunction with Crushing Weight.

At the 20th level, you have reached peak size and with it gained your own gravitational field. You are so massive that your sheer presence can effect things around you. As an action, you may selectively draw in nearby medium and smaller creatures, and equally sized items within 15 feet to your own body. Creatures must make a Strength Saving throw equal to your 20 or be forcibly moved 10ft closer to you. If this effect results in them colliding with you, the target takes 2d6 bludgeoning. If the path of a ranged attack that is not targeted toward you travels within 15 ft of you, you may use your reaction to cause the attack to go off course and negate the attack.

You have gorged yourself in order to pack on those fatty pounds. You've mastered your heft to impede your enemies and protect yourself and your allies.

Your excess fat comes from life giving food, which seems to have made you a little hardier than most. Starting at 1st Level, Add 2 additional HP to your maximum HP. Upon each Level Up, add 2 additional points to your max HP. Additionally, after each long rest, you gain Temporary HP equal to your Masser Level.

At level 11, you can take all sorts of damage. While using Hunker Down, you gain immunity to non-magical Bludgeoning, Piercing, and Slashing damage; as well as resistance to all other forms of damage.

At Level 15, your fat is as protective as any armor. Add your proficiency bonus to the armor class granted to you from your unarmored defense.

You've carefully sculpted your body into a muscular temple. Making you capable of hitting a lot harder than most.

This Isnt Too Heavy

You're capable of making massive feats of movement thanks to your enhanced strength. At 3rd level, your long and high jump distance are doubled. Also, you may take a bonus action to dash. Also, if you travel at least your move speed toward an enemy while dashing, you may make one melee attack as part of the same bonus action.

Nothing can stop you momentum. At 7th Level, when you move at least half you movement speed you may enter the space on which a large or smaller creature is standing. When this happens, the creature is forced to move to the nearest adjacent space. Additionally, the target must make an acrobatics check against a DC = to 8 + Proficiency bonus + your strength mod. On a fail, the target falls Prone. This effect may be used on objects such as door, weak walls, barrels, etc to break through them. Deal damage on objects you are trying to break with this ability equal to 3 times your Athletic(STR) Modifier.

Starting at 11th level weapons are seemingly weightless compared to your strength. You may dual-wield 2 two-handed weapons at the same time. Additionally, once per round you may double your strength modifier on the damage of one of your attacks.

Starting at 15th level, your hits always carry a hefty force. When you roll a damage dice, you may roll it twice and take the higher number.

Staring at 18th level, you force behind your attacks is devastating. Once per turn, you may roll an extra damage dice on one successful attack.

Prerequisites. To qualify for multiclassing into the Masser class, you must meet these prerequisites: 13 Constitution and 15 Strength

Proficiencies. When you multiclass into the Masser class, you gain the following proficiencies: Athletics, Intimidation