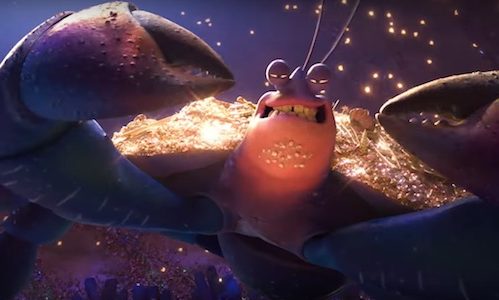 You aren't fabulous enough to be a threat in his eyes

The demigod struggled to get to his bearings as he crawled up the overgrown Bard's back... fingers grasping at the coins and treasures he laid upon, before collapsing. At which point the cocky creature began to spin, loosening his grip...

Maneater Crabs are huge, amphibious, dangerous magical beasts with capacity for speech. They possess an attraction to treasure not unlike that of dragons, and keep their hordes close: attached to their back as decoration and protection, often fawning over their own appearance. Maneater Crabs, sometimes called Glitterback Crabs, are fond of attacking travelling ships to raid them for valuables. They are known to be cruel as well, sometimes capturing those from the ships they destroy to take back to its lair, either enslaving them as admirers or interrogating them about potential sources of loot that may be crossing through the area. Most prisoners are eventually eaten.

Maneater Crabs speak whatever language is local to the seas they live in, usually Common.

A Maneater Crab typically stays on the move, attacking foes with its claws while remaining out of reach as it confidently dances around its prey. It will usually attempt to Swallow Whole someone it sees as weakened or someone who poses a significant threat such as a magic caster. If it has only one or two foes who are much smaller than it, it often prefers to toy with them before killing them.

A Maneater Crab never, ever willingly parts with any of the treasure attached to its back. Anyone who removes said treasure earns the immediate focus of the crab's anger and attacks.

Snatch (Ex): A Maneater Crab can choose to start a grapple when it hits with a claw or bite attack, as though it had the improved grab special attack. If the crab gets a hold on a creature three or more sizes smaller, it squeezes each round for automatic bite or claw damage.

Swallow Whole (Ex): A Maneater Crab can try to swallow a grabbed opponent of a smaller size than itself by making a successful grapple check. Once inside, the opponent takes 2d10+18 points of crushing damage plus 10 points of acid damage per round from the crab's stomach. A swallowed creature can cut its way out by using a light slashing or piercing weapon to deal 40 points of damage to the stomach (AC 20). Once the creature exits, muscular action closes the hole; another swallowed opponent must cut its own way out. A Maneater Crab's stomach can hold 2 Huge, 8 Large, 32 Medium, 128 Small, or 512 Tiny or smaller opponents.

Rend (Ex): If a Maneater Crab hits with both claw attacks, it latches onto the opponent’s body and tears the flesh. This attack automatically deals an additional 4d12+14 points of damage.

Bioluminescence (Ex): When in the dark, a Maneater Crab's body glows in vibrant patterns over its shell, limbs, head, and antennae. These patterns can be pink, blue, purple, red, or green, and are unique to each Maneater Crab. The bioluminesence often shines through its horde shell creating an eerie glow over its back. A Maneater Crab has some control over its bioluminescence, able to shut it off when hiding (but not when asleep) or flash certain colors; this grants the Maneater Crab a +4 to Intimidate Checks in the dark at its discretion.

Horde Shell (Ex): A Maneater Crab keeps its horde attached to its back, a treasure pile that spans its entire back shell. This provides it an extra layer of armor, granting it a +10 to its AC (included in the stats above) and is a great source of pride for the crab. If its horde is ever significantly damaged or removed, it flies into a manic rage (that reduces its Charisma to 16) until its horde shell is repaired or restored. A Maneater Crab holds a long standing grudge against anyone who gets away with damaging its horde.