The 30 foot wide cylindrical room is barren save for the unimposing 3 foot tall gnome standing in the center wearing rather eccentric clothing adorned with red and orange flame-like motifs. His belt filled with small red balls in little holders, pouches and flasks filled with varying colours of liquids. The room appears to faintly glow at certain pivotal points in the structure, mysterious runes adorning the brick surface.

Mad Blazer Joral McGee is a crazed gnome with crazed fixation with fire. He stands barely 3 feet tall with bright red spiked hair and blue hair. He wears burnt clothes and his own personal utility belt. It has containers for his multitude of Necklaces of Fireballs that he uses as grenade-like weapons. The belt has two holsters on either side of his hips for his main weapons; a pair of wands. To his left, a Wand of Dispel Magic and to his right, a Wand of Fireball. The back of the belt is reserved for his potions and his spell component pouch (Full of Guano!).

In combat, Mad Blazer Joral McGee is nearly always encountered in his own chamber. If he is not encountered in his chamber (Described below), he will immediately cast Greater Teleport to return back to his chamber. In his chamber, his "Inner Sanctum", Joral will fight any intruders with an array of fire magic and trickery. At even spaces around the chamber, Joral has scribed explosive runes in an evenly spaced out pattern of 20 foot distances, curving with the room. Joral will use these inscriptions to his advantages when dealing with outsiders, using his Wand of dispel magic to intentionally fail the dispel check and activate the runes.

Joral's main concern will be controlling the battlefield. If he knows that people are entering, he will already have spells active upon his person (fire shield (warm), overland flight and spell turning). Joral will start off any battle by casting wall of fire across the center of the chamber. He will then either use his Wand of Dispel Magic to cause Explosive Runes to explode so that they'll damage the most amount of enemies, or will use his various amounts of fire spells to deal multiple damage to multiple enemies at once.

Joral's main method of movement will be flight, meaning he will move upto at least half his speed each round to keep airborne. In order to hamper land based movement, Joral will cast Grease when appropriate. If the intruders move through his wall of fire, then Joral will try to use an explosive fireball (Either heightened or not) to push his opponents back through the fire. If Joral begins to run low on spells, he will begin to use his Necklace of Fireballs in order to cause explosions. If he is grappled, however, he will cause them all to detonate at once by activating one on his person. Due to being a fire creature, he will take no damage from this action. Joral will also fall back onto the use of his Wand of Fireball to deal damage against opponents.

Joral will attack casters first and then move onto others, due to his foresight at the power of a caster. Casters will be often the main target of Joral's fire energy chain lightning or scorching ray attacks. He does this to ensure that he can keep his forcecage active without it being disintegrated and so that they can't combat his other spells. 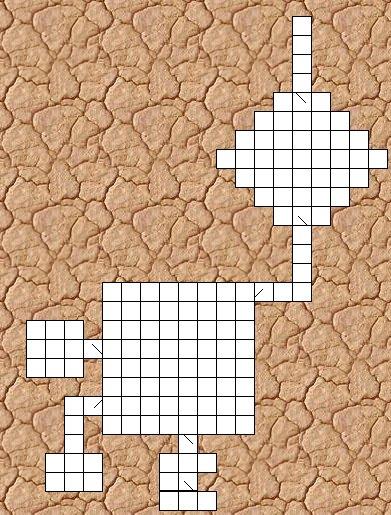 Joral's Chamber is a five roomed 'home' located on the side of a volcano. The entrance is made to look like a cave that has been covered with rocks, but a small creature can easily slip in between small gaps of the rockface. Despite the cave-like exterior, the interior is smooth marble floor with a red tint. The walls are all smooth and tiled with a beige rock colour. The initial entrance is a 20 foot long corridor, 5 foot high and 5 foot wide. This area is warded with a permanent alarm effect, which alerts Joral mentally if he is currently inside. The end of the corridor ends in an iron hatch that opens inwards. If Joral is not currently in, the hatch has a metal bar across the breadth of it that does not allow it to be open without an appropriate strength check. The hatch is open while Joral is currently inside his Chamber and is used to circulate air from the outside into the Chamber.

The first room is cylindrical with a 20 foot radius and a height of 25 feet. The floor is made of tiles that are 5 square foot big and the walls are perfectly smooth. The bottom of the wall has flame decorations of varying sizes. The room has varying glowing symbols on certain tiles, all evenly spaced out from each in a circular fashion. This room is known to Joral as "The Intruder Room". This is the room that he attacks any unauthorized intruders. The room does not have any other adornments within. Opposite of the hatch, there is a hallway that has no door. The hall is 25 foot long with a turn to the right in the middle (10 foot, turn, 10 foot) and, as before, 5 foot high and 5 foot wide. This leads into Joral's personal research lab.

The main room of Joral's Chamber is his research lab. It is a cube room with measurements of 40 feet. The floors are tiled similarly to the previous room,,but without the glowing symbols. The perfectly vertical walls are all adorned with various paintings, mostly depicting various things on fire or the power of some kind of fire god. The most notable of the paintings is upon the floor, which depicts a man holding a burning torch up. The tip of the torch glows brightly. The room is used as a personal laboratory and library by Joral and appears to be in four tiers of height. The walls have shelves on them at each tier. The first tier is the bottom tier, which has no shelves, but instead it has various workbenches, notes and piled assortments. There appear to be a lot of fire-based components as well and writings on the study of Red Dragons and their ability to breathe fire. The first tier is the next 10 feet of height, which contains 7 levels of shelves between itself and the next tier. These shelves extend the entire way around the room and contains a multitude of books, including spellbooks, story books and arcane theories. The next tier, again taking up 10 feet of space, is taken up by a single shelf that holds various containers. These containers vary in size and contents, but they all appear to be holding something of experimental value. They're all labelled. One appears to be a mote of a Fire Elemental, another labelled Dragon Heart, and so on and so forth. The final tier has shelves that hold rocks. Lots and lots of different rocks. All of them appear to be labelled with various names and locations of where they were gathered from.

The 15ft by 15ft room west of the main lab is Joral's personal chamber, wherein his bed lies and his personal effects are set out in wardrobe and desk. The chamber's walls are smooth stone, but reinforced with iron around the joints. The hallway into the room has two wands upon it's wall. The first is a Wand of Disintegrate and the second is a Wand of Stone Wall. These two are used for Joral's final plan. The area above the lab is a volcano and, as per normal volcano standards, a lake of lava bubbles with heat about 10 feet above the lab itself. In order to stop anyone from getting their hands on his precious work, Joral will disintegrate one of the blocks that make up the roof of his lab (which, beyond the tiles, is mostly unworked stone), causing the lava to spill into the chamber. In order to protect himself, Joral will retreat into his room and close off the area with wall of stone.

The south western room is a kitchen, wherein Joral has various cooking accessories, fires and spices to make his food ever so delicious. The area has a Decanter of Endless Water that Joral uses to drink from or wash various things. The kitchen, otherwise, is rather unremarkable. The walls and floor are tiled and the kitchen is 10 foot high.

The southern most room is a holding cell, with a barred cage. The cage is mundane and made from steel. This cage is used for holding prisoners that Joral plans to interrogate (with questions like why they're invading his privacy). The cell contains a single hard stone bed and a place where one may defecate or urinate at their leisure.

The entire Chamber is protected by a permanent mage's private sanctum spell to block out all divinations. The entire place is lit by torches all around the walls.