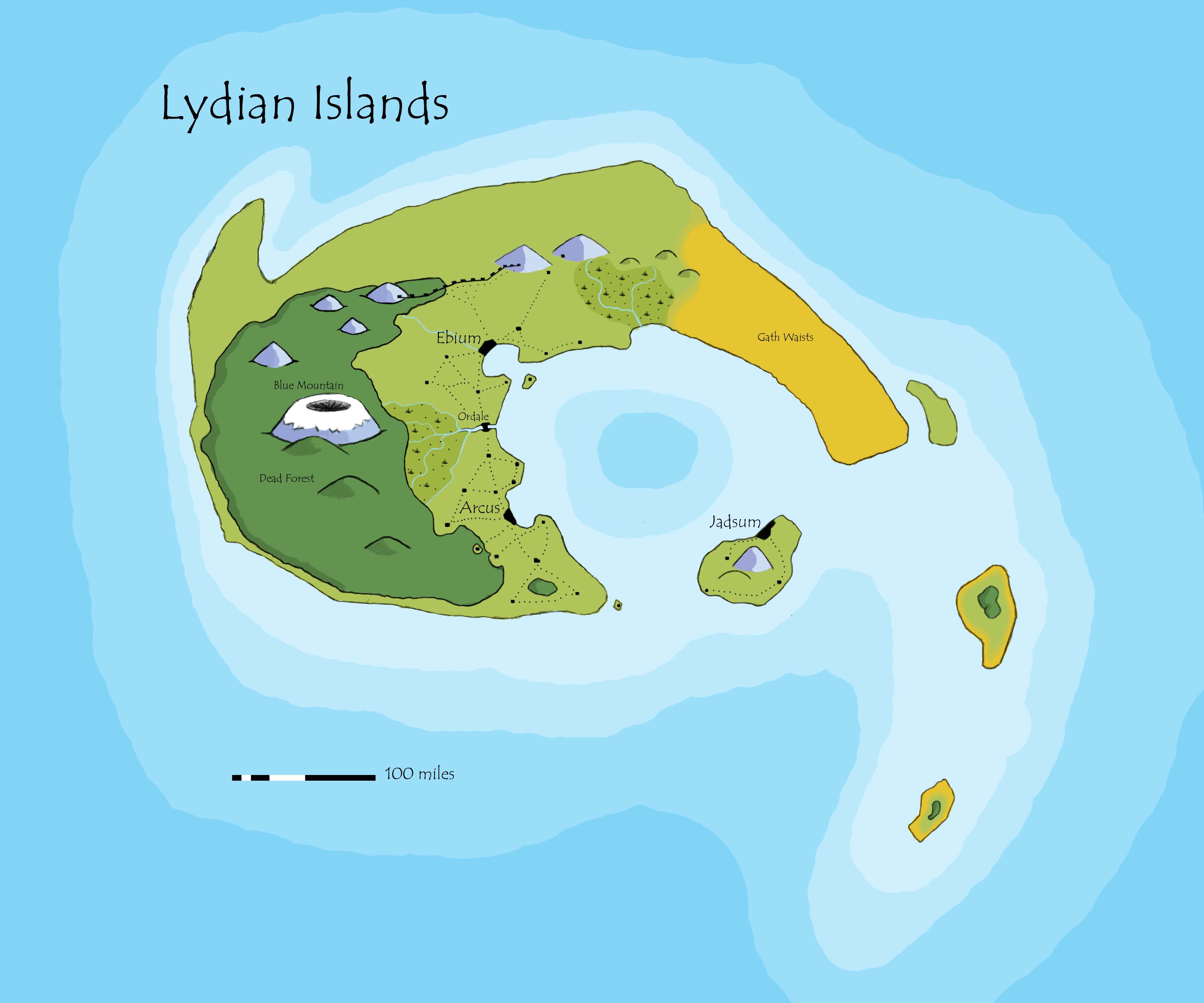 The Lydian Islands are a chain of islands that contain many good environments and can host almost any sort of story. When I created the Lydian Islands I intended to create a setting that was small enough so as to not overwhelm new players, and also diverse enough to have almost every imaginable environment. It is surrounded by vast ocean waters, which provide a boundary that new players wouldn't try to cross. There is plenty of history and adventure waiting to be discovered on these islands.

Warning! If you are one of my players, and you know who you are, than don’t look at this or you will ruin all the fun for everyone and it will be all your fault!

There are three major cities. Two of which are on the big island, and another on the smaller island. These Cities are very different from each other and provide all sorts of urban environments. There are also a few smaller towns, and many villages.

Arcus, in the south, has a lumber based economy, and therefore is built mostly out of wood. The potential for fire is very large, and if one were to happen, the entire city would be in trouble. The people here have a more socialist political nature. There is a wall around the city, that is not very large. It is perhaps one story tall at most. The military is best known for its archers. The forests nearby provide an abundant supply of very fine woods.

Ebium, to the North, has an economy based on iron mines. The politics here are very loyal to the crown and very militaristic. The buildings are made from stone. Even civilian owned buildings resemble military structures. The walls are very tall and reinforced with iron. Ebium is known for the high quality iron and other metals that can be mined in the mountains near by. Its military is primarily heavily armored infantry.

Jadsum, on the smaller island, is separated and naturally more independent. It has no abundant resources and relies on trade, more so than the other cities, to fuel its economy. It is particularly well known for its excellent ship building and navy. It sits under Mt Kia, which is the location of the legendary Kia Temple. (more on this temple later)

Ordale is a smaller city located between Arcus and Ebium. It lies on the river (which has yet to be named) that creates a natural separation between north and south. The buildings are mostly made from bricks that are made from clay gathered from the river. Iron is brought down from Ebium to be turned into steel, and hard woods are shipped up from Acrus to fuel the steel mills.

The Islands are very diversified in environment and terrain. The Idea I had when I first created these islands was to provide every sort of environment I could think of, and keep the size small enough that it could all be explored.

Surrounding the larger cities are many villages and farm land. In this area, players will encounter less dangerous monsters. This is Campaign Setting was intended for players who don’t have any previous experience with Roleplaying, and the farm land is intended to "ease" them into the wilderness. The treasure will be limited since the monsters are small and farmers don’t have much wealth.

Some of the plains have been cultivated into farmland, but much of it remains undeveloped. The grass lands of the Lydian Islands range from flat lands to rolling hills.

Things to watch out for when traveling the grass lands:

Things you might encounter on the far side of the wall:

There are two marshes on the big island.

The Fresh Marsh is at the foot of Blue Mountain and drains into (unnamed) river. This helps to create the natural barrier between North and South. The primary inhabitants here are a tribe of Lizard Folk. They have not given the humans much trouble for the past few generations, but have been more active recently. Small hunting and scout parties have been seen wandering the plains, and even the farmlands.

The Salt Mash, east of Ebium, is not created by rain. Instead, twice a day, it is flooded by the ocean tide. It is similar to the other mash, but is much more inhospitable to humans. There are all sorts of beautiful nasties in this marsh. It homes creatures that are more dangerous than the other marsh.

The Lydian Islands are rich with vast forests. The economy of Arcus is based on the harvesting of this lumber. Fine woods, such as darkwood can be purchased in Arcus for 25% less than standard cost.

The forests are mostly unexplored. It contain many magical creatures and ferocious monsters. The further into the forest you go, the more dangerous it becomes. On the far side of the Crescent Mountains, lies the haunted Dead Forest. No one knows what inhabits this part of the woods, because no one who has ever entered has ever returned.

The Mountains are rocky and steep. They are riddled with limestone caves. There is a Kenku city on isolated cliffs unknown to the humans. They have been watching in secret.

The peak of blue mountain is tall enough to have a snow cap year round. There is not much to hunt, so creatures here are few. They spend most of their time conserving energy, but might come down occasionally to hunt.

Things to run from:

The Gath waists are a result of a rain shadow caused by the Crescent Mountains. It gets almost no rain, is inhospitable and very hot. Food is scarce so encounters are few. Here in the desert is a population of snake people, the Yuan-Ti.

A dormant volcano, named Blue Mt, can always be seen in the horizon. It is located at the center of the main island and is taller than the other peeks.

At some point in the game, something important happens and the volcano becomes active again. First there is an earthquake and then smoke can be seen. Perhaps it erupts dangerously. Perhaps it contains a secret.

The contents of the volcano will most likely reflect the plot in your story.

Being that this is an island, the ocean will play a key roll. The deeper ocean is very rough, and only very large ships can travel the storms. These ships only come to the island four times a year. Smaller ships can be found all over the island. Fishing boats, military ships, even pirates populate these waters. The calmer waters inside the large bay has a great deal of smaller boat traffic.

In the calmer waters:

There are the remains of a fallen Elvin kingdom on this island. The elves left the island a thousand years ago. No one knows why, but everyone can agree on one thing: Elvin kingdoms leave behind a lot of cool treasure.

Humans have been on the island for approximately 4 generations. They have built 3 major port cities and many smaller towns and villages. This island is considered a colony of a much larger and more powerful mainland nation known as Peridia (or whatever you want to call it).

There has been little Lizard Folk activity for four generations. But lately there have been small scouting parties seen wandering the country side near the fresh water marsh. Little do the humans know that the Lizard Folk are plotting to take back the island that was once theirs.

Long ago, this island was inhabited by Elves. No one knows why they left. To this day, elves seem to avoid this island. This is very strange. It would make sense that there are no dwarfs, because they hate water, but why no elves?

The truth is there are elves. In the Dead Forest there is a tribe of wild elves. And at the center of the bay, there is an underwater settlement of Aquatic Elves. Other elves do not come to this island for reasons that they keep to themselves.

The Wild Elves live in complete secret and solitude. They guard their forest closely and savagely kill anyone who enters, which is why humans call it the Dead Forest. The Humans think it is haunted. All they know, is that when some one goes in, they do not come out.

The Aquatic elves are also very secretive, but more civilized. They have a grand underwater palace, similar to the legendary Atlantis. They have been keeping a close eye on the humans above, but have seen no reason to reveal themselves.

There is a small Kenku settlement hidden in the mountains. Like the elves, they watch the humans from a safe distance, and keep their presence secret.

The people of these lands worship dragons. They created the world and everything in it and represent different aspects of life. Many villages have a particular patron dragon. The village will make sacrifices and hold festivals in honor of the dragon. They believe the dragon will bless and protect the village when happy. The dragons would not always represent the same thing to every village. A blue dragon might represent luck in one regain, and it might represent wisdom in another.

There is one particular church, that has grown larger then the rest. It pays homage to the golden dragon as the one true king of dragons. It has a missionary drive to convert others and is the national religion of Peridia. The religion is about five hundred years old now.

This divide has become known by many nicknames. Such as the Old Way, and the New Way.