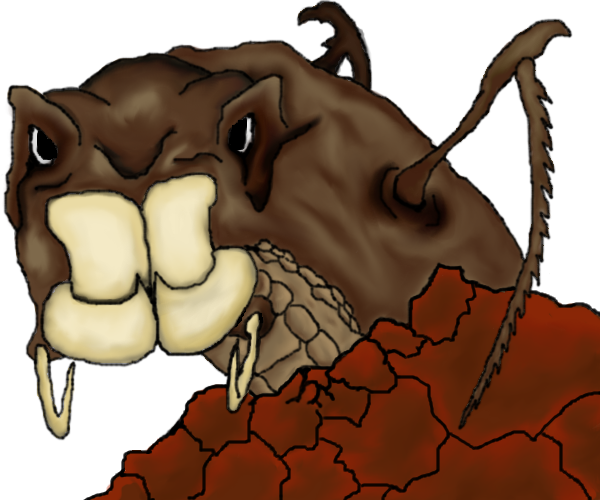 Note: The Loxellion is a heavy hitter and likes to use Power Attack. It usually takes a -3 to hit with its attacks to add extra damage. These adjustments are included in the stat block.

Out of the ground emerges a huge tanned-brown worm-like creature with insect legs. It's mouth has four large teeth obviously used to burrow. Two stingers are on each side on its teeth and they drip with acid that makes the rock mushy when it makes contact. The creature rears up and then burrows towards you with full momentum.

Improved Grab (Ex): To use this ability, a Loxellion must hit an opponent least one size category smaller than itself with its bite attack. It can then attempt to start a grapple as a free action without provoking an attack of opportunity. If it wins the grapple check, it establishes a hold and can attempt to swallow the opponent the following round.

Swallow Whole (Ex): When a Loxellion begins its turn with a grappled opponent in its mouth, it can swallow that opponent with a successful grapple check. Once inside, the opponent takes 2d8+12 points of bludgeoning damage plus 4d6 points of acid damage per round from the Loxellion’s gizzard. A swallowed creature can cut its way out by using a light slashing or piercing weapon to deal 25 points of damage to the gizzard (AC 16). Once the creature exits, muscular action closes the hole; another swallowed opponent must cut its own way out. A Huge Loxellion’s interior can hold 2 Large, 4 Medium, 8 Small, 32 Tiny, 128 Diminutive, or 512 Fine or smaller opponents.

A Loxellion loves to eat fleshy humanoids, but is well aware of their tendency to travel in groups. It will follow a group underground for hours until it the group has either stopped to rest or one of the members has moved away from the group. It will then attempt to grab a victim.

Tactics by round when attacking a single target:

Round 1: Cast spike stones, surrounding the target
Round 2: Attempt to bite the target and use improved grab

If the bite hit

Round 3: Swallow whole and burrow underground

Round 4: Attempt to grapple the opponent
Round 5: Burrow underground

Tactics by round when attacking a party:

Round 1: Cast spike stones, surrounding the party
Round 2: Burrow underground
Round 3: Wait until the party has traversed the spike stones
Repeat and then the third time attempt to engage the party directly

4d4 gemstones. The Loxellion is slow to digest gems and they can be found in its gizzard.