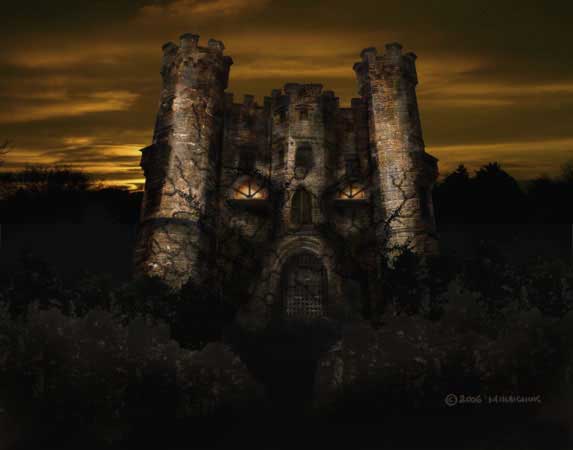 Something like this, only less dark and a lot bigger.

A giant fortress festooned with fearsome battlements and a great, taciturn face hewn in the stone of its front, it moves across the known lands with a foreboding rumble, displacing all in its wake.

A living fortress is the result of ancient and long forgotten epic magics. Although at its core it is a construct, it is the product of many commingled earth elemental spirits, which bestows upon it true life, and grants it the traits of an elemental. A living fortress is over 200 feet from side to side, and weighs roughly 120,000 tons.

A living fortress is outfitted with a multitude of defensible placements in a similar fashion to a real, stationary fortress. In battle, it simply lumbers in the direction that its master wills it to with a constant, unrelenting crawl.

Fortress (Ex): Being a fortress and not an actual creature, the living fortress is treated somewhat differently in combat to an ordinary creature, as follows.

Crush (Ex): When bullrushing a creature against an obstacle such as a wall or cliff, a living fortress crushes that creature with its titanic bulk, dealing an immediate 24d12+30 bludgeoning damage unless the creature succeeds on a DC 35 Reflex save. The save DC is Dexterity-based.

Earth Affinity (Su): When a creature casts a spell or spell-like ability with the Earth descriptor while inside a living fortress or on its battlements, its effective caster level is treated as four levels higher. Furthermore, when using a summoning spell in order to summon a creature with the Earth subtype, the spell is treated as being one level higher (for example, summon nature's ally V becomes summon nature's ally VI when intended for an earth creature). In the case of a 9th level summoning spell, the summon instead conjures twice the number of creatures it normally does.

Earth Glide (Ex): A living fortress can glide through stone, dirt, or almost any other sort of earth except metal as easily as a fish swims through water. Its burrowing leaves behind no tunnel or hole, nor does it create any ripple or other signs of its presence.

A living fortress always uses its earth glide, even when effectively above ground. In those cases, it remains fixed to the earth, and simply moves across the surface. A living fortress has no discernible underside, meaning that it is unable of using the overrun ability.

A living fortress always touches a source of earth, and cannot navigate a body of water (although it might be able to burrow underneath it).

A living fortress gets a +20 bonus to opposed bull rush, grapple and overrun checks, as well as to saves against effects that would move or displace it.

Magic Immunity (Ex): A living fortress is immune to any spell or spell-like ability that allows spell resistance. In addition, certain spells and effects function differently against the creature, as noted below.