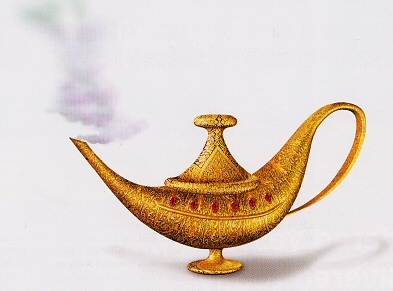 A lamp of hundred wishes, I wonder what inside?

The Lamps of Hundreds wishes are extremely powerful items. They were create by a mysterious guild of demonbinder (genies are "demons" in my campaign) in the desert of Isaloa (or in your campaign desert). The wizards of the guild whose name was lost in history, bounded their prey in lamps. These wonderful lamps can be made of any material but material is compatible with the nature of the genie (Efreeti in a brass lamp by example). They sealed the lamps with powerful magic so powerful that even the mightiest genie could not break the enchantment. Their magic also forces the genies to grant a wish to anyone possessing the lamps. However the demonbinders knew the lamps would be overused by mortal so they configured their enchantment in a way that after one-hundred wishes were granted the magic binding the genies evaporates. Unfortunately what the demonbinder's didn't foresee was the bad habit of recently freed genies to try to kill and torture the one who made the last wish. So many poor souls who found a lamp with very few wishes remaining died of horrible pains, or if they were lucky, turned into an funny thing by a good genie. As stated above the lamps have only one-hundred wishes to grant, not one hundred wishes per owner, The user have no way to know how many wishes remain in the lamps because the lamps magic dosen't force genies to reveal it, which makes using the lamps risky at best.

When the player first use the lamp roll a D%:

Power Level: The genies power levels determine what he(she) can do, it also influence is ego (a godlike genies is far more arrogant than a ridiculously weak one). The apparency of a genie change depending of is power levels. A weak genie will be small and ridiculous and a mighty is...mighty.

Roll a D% to determine the alignment of a genie; use this table to better determine it:

If the result is 100 determine the fiend in any fiend table you can find, after the demon (all fiends in my campaign are called demons) is defeated, the lamp turns into a non-magical lamp, except that the oil burning inside smells horrible. If the demon kills the user, he returns to the lamp, awaiting his next victim (another one of the demonbinders' tricks is to make those lamps less tempting).

In order to determine the ego of the genie the DM must combine some factor:

You may choose is character or roll a D20 three times, either choice you can refer to this table:

When all wishes are used the magic dissipate. The last owner of the lamps must do a diplomacy check equal to the ego of the genies. So level 50 genies would have in base 25 ego.If the character fail the DC the genies unleash his/her fury on him. Chaotic genies are alway harsher then lawful one.
When the lamp is founded roll a D% to determine the remaining wishes.