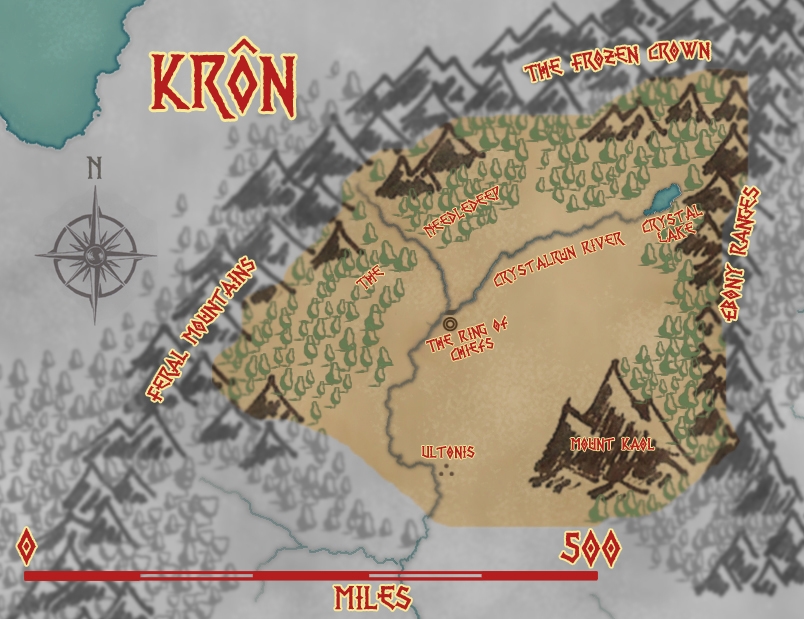 Krôn is the land of Kaol, Draenic Prince of struggle. There is a huge, seemingly unnatural mountain near the southern border of this hard tundra land that the native Krônians refer to as Kaol; according to them, it is the Prince's home on the Material plane, from which he can watch the toils of his chosen people. The Krônians themselves are a gloomy lot of tall, dark barbarians. They are organized into over 120 clans of 30-100 members, and are scattered throughout the harsh land, scraping together a survival as best as they can. Clan leaders are chosen based on whomever is strongest in the clan to influence the rest of the clan members. If someone seeks to challenge the current clan leader, then so be it, but it will most frequently boil down to combat to the death. For this reason, clan leaders are almost invariably the fiercest warriors in their clan; the best leaders are also wise, or know whom to seek for council. Every clan has a council, which is made up of all proven adults. It is their job to provide insight to the clan leader, who will make a decision that is hopefully to the benefit of as many clan members as possible.

Clans in the far south commonly ride horseback and hunt wild cattle with spears. They often raid into the northern reaches of Atralonia during especially harsh winters, taking food from the villages and retreating back into their lands, slaughtering anyone who gets in the way. To the west, clans predominately carry maces and axes, and live mostly as foragers and small farmers of chicken or goats in the dark forests of the Needledeep. These clans are almost constantly engaged in combat with monstrous races from the Feral Mountains, and live a sorrowful life of struggle and loss. To the north, clans roam almost exclusively as big game hunters and gatherers. These clans mine ore from mountain caves and are renowned in legend for their skill at forging blades of all kinds. They wield swords and arrows against bears, giants, and monsters from the frozen wastes.

There is no clear unity between the clans. In years of plenty they may trade between themselves--offering the easy meat from cattle in exchange for high-quality weapons, for instance--but sometimes even small affronts can result in bloody inter-clan battles. In times of great trouble, the clan leaders meet in the Ring of Chiefs next to the convergence of the Crystalrun and Needledeep rivers to discuss temporary alliance. These days, almost all of the clan leaders end up appointing Gwydd, leader of the Orckiller clan, as temporary High Chief. His clan lives far to the west, and is in engaged in combat most frequently and most desperately.

In the south of Krôn lie the ruins of Ultonis, an Atralonian settlement constructed in 4e 96 as an outpost for deeper expansion. Before the settlement was completed the combined might of the Krônian hordes descended on Ultonis, murdering almost everyone inside after only a two day siege. Those Atralonians that escaped were pursued as they fled south, and only one, a scribe named Allian Hanotepelus, survived to tell the tale of slaughter. Atralonia began assembling an army to retaliate, but Krônians surged across their Northern borders, annihilating the army before it could muster its full strength at the Battle of the Alessian Highlands. Since then Atralonia has maintained a strict nonincursion policy with Krôn; the Empire tries to defend its frontier cities and villages from Krônian raids, but will not under any circumstances cross the Krônian border in force. With that in mind, Krônians are suspicious and terse but tolerant of foreigners in small numbers. Southern Krônian tribes have even been known to trade weapons in exchange for food goods.

Heraldry: Krônians have no civilized socio-political structure, and therefore have no need of heraldry. Rather, they organize themselves into distinct clans, though each individual clan still displays no banner or symbol.

Classes (Restricted) - For fairly obvious reasons ranging from impracticality to disdain, there are no traditions of the following kinds in the land of Krôn.